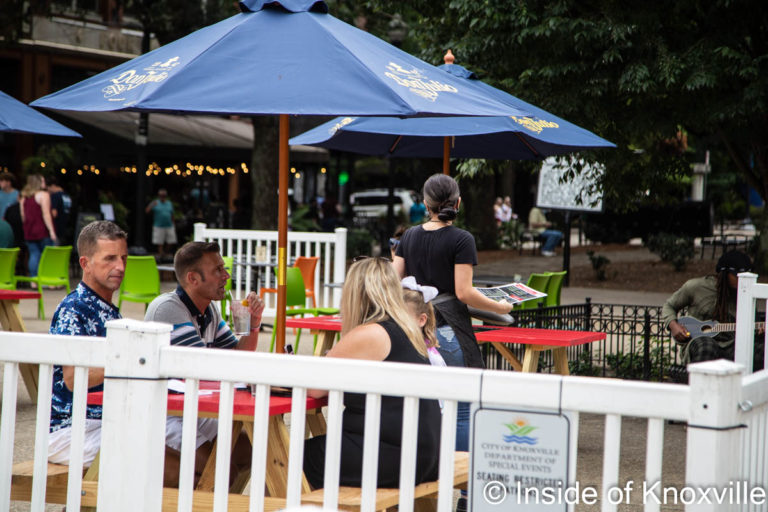 If there has been one constant thread throughout the last ten years of expansion and growth in downtown Knoxville’s restaurant scene, it has been the ever-increasing demand for outdoor dining spaces. Once a small after-thought, in recent years restaurants have clamored for as much space as possible.

Some have small spaces for a couple of tables, others have expanded up and down the sidewalk or out into the square to add a dozen or more tables. Rooftops have exploded in popularity as a place to eat and drink. We have seating in alleyways, seating above Gay Street on a second-floor extension, on balconies and in loggia.

Many of us have long preferred to eat outside in good weather and the city is blessed with great weather much of the year. There is something convivial, open and inviting about breaking bread with friends in the natural world – even if it is on a city street. Some of my favorite memories of the eleven years I’ve lived downtown are the long-table dinners with friends stretching nearly out of sight in the twilight.

With the advent of COVID-19, the push for outdoor dining became a lifeline for restaurants as we learned the virus isn’t as likely to be transmitted outdoors and expanding outdoor seating allowed for restaurants to add tables lost to spacing inside – or to outright closures on indoor dining. That, along with takeout sales, has allowed many restaurants to hang on through this difficult time.

It started in the largest cities and has been embraced in places like New York City to a startling extent. Smaller cities across the country have embraced the idea, adding parking spaces, more sidewalk space and parking lots to allowed spaces. Knoxville has given long-term use of many downtown parking spaces to restaurants for easy take-out, which now includes mixed drinks. Most notably, a large section of Market Square has been devoted to the idea.

Last month, Mayor Bill De Blasio in New York City made the expanded outdoor efforts there permanent, calling them a “new tradition” and promising to expand the program. The extent of the program there is stunning. So far, 10,300 restaurants have added outdoor seating. Estimates suggest up to 90,000 restaurant jobs have been saved by the program.

It’s tied in with efforts to make more New York City Streets pedestrian-only, an effort which was underway prior to the pandemic, but has been expanded rapidly during the pandemic. Of New York City’s 6,000 miles of streets, 70 miles are now pedestrian-only open streets and of these, 15 miles of streets allow dining in the streets. Plans are being made for heaters and enclosed pods to extend the outdoor dining into the winter.

An article in the Sunday Times this weekend outlined nine ways that New York will be altered by outdoor dining. The author suggests that the line between street food and restaurant food will become blurred, that outdoor dining will become more vibrant and inviting and music will be featured in the streets.

He also states he feels New Yorkers will start to think of streets in different terms:

. . . once you’ve gotten used to enjoying dinner and a cocktail on a patch of blacktop that would otherwise be taken up by a RAV4, you begin to wonder what else could sit in the street . . . What about community gardens? Meditation classes? Soccer match broadcasts? Desks with outlets and Wi-Fi for the permanently WFH? More tables and chairs set aside for people who can’t afford a restaurant meal?

He even suggests that outdoor dining could figure into the debate about policing as more “eyes on the street,” becomes a reality and less policing may be needed. That said, there will be problems produced by the arrangement, which will also have to be addressed.

He ends on a hopeful note that the reduction in regulation seen there will continue:

. . . it will be a great loss if the system is recomplicated so much that restaurateurs again need to hire a lawyer, an architect and an expediter to get permits. The whole city has benefited by encouraging restaurants of all sorts, from the most well-off to the leanest and scrappiest, to lend their own flavor to public spaces. Our economy is struggling, but our street culture, after decades of changes that made it more boring, is interesting again.

So, to bring it back home: Knoxville has followed suit in modest ways. The Market Square addition is the most significant, but when festivals, markets and concerts return there, this space will be at a premium. We’ve given up parking spaces along Gay Street. When demand for curbside pick up reduces, could those spaces be used for increased dining? If New York can close 70 miles of streets to traffic 24-7, could we close some blocks to all but delivery traffic on weekends? Can’t Gay Street finally be made pedestrian-only on First Fridays?

When the Market Square expansion was opened up to quick approval, an oversight didn’t allow alcohol sales on the square. That was quickly remedied. It’s consistent with a move just prior to the pandemic to allow open containers on several Gay Street blocks during festivals.

Why not use the present to make carry-out drinks permanent and allow open containers throughout downtown? Sound too progressive? My hometown of Mobile, Alabama allows it throughout their downtown, to no apparent harm. I was there in February for Mardi Gras and learned that the only rule is the cup has to be plastic. For the uninformed: Mobile, Alabama isn’t some wide-eyed liberal town.

Make no mistake: Restaurants are struggling to survive and their situation isn’t likely to get better until sometime late next year. We need to act to do everything possible to make it likely we have a food culture in this city when this pandemic ends. If we don’t throw the businesses as much of a life-line as possible, we’ll lose much of the gains we’ve experienced the last ten years.