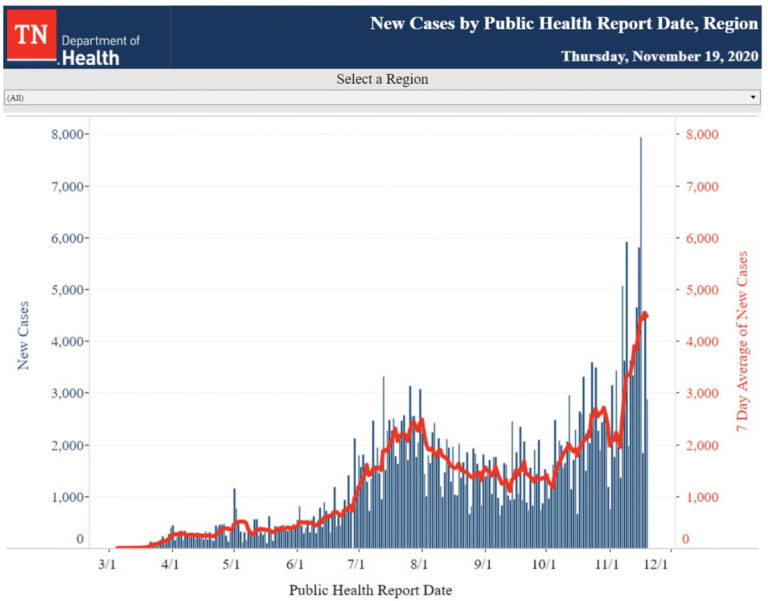 I hope you are having a good Friday and have carved out some relaxing or fun time for the weekend. Tonight, is build-your-own-pizza night at our home, with our celebrity 5-year-old as the judge in the pizza baking contest. Hot chocolate and movies will follow at the after-party. There will be football, long walks, and lots of snuggles this weekend.

As you know, I try to share a little levity or uplift at the beginning of my articles, because the topic is depressing, and we’re all exhausted. At this time, however, it is important to understand just how tough the situation has become. Deaths across the world have crossed the 10,000 per day mark, an unprecedented number. Hospitalizations are at a peak in the U.S. and deaths have, once more, crossed 2,000 per day as cases approach 200,000 per day.

Please be careful. Please consider not gathering or traveling at Thanksgiving. The CDC has recommended against travel and we already know that hundreds of thousands of college students are preparing to do just that. If we have a normal Thanksgiving, with unmasked gatherings of friends and family, we will likely be saying our final farewells to large numbers of those people by Christmas.

Tennessee reported 2,887 new cases for the day, yesterday, resulting in new totals of 304,077 confirmed cases and 24,011 probable cases. 283,785 people are considered to have inactive cases and 16,164 Tennesseans have active cases of COVID-19. What would have been close to a state record just six weeks ago, was only the 24th highest state total in the U.S. for yesterday, with 42 individual states reporting over 1,000 new cases each. Tennessee is now averaging 4,481 new cases per day.

80 deaths were reported in the state, bringing the total to 4,128 Tennesseans who have died of the virus. The number is the second highest Tennessee has reported on a single day since the beginning of the pandemic, with the highest coming eight days earlier. The death total was the seventh worst in the country among the states, with four states exceeding 100 deaths for the day. Tennessee is now averaging 48 deaths per day from the illness.

As they have for two months, hospitalizations continue to track upward and to set new records each day. 80 additional COVID-positive Tennesseans were hospitalized yesterday, bringing the pandemic total to 11,422. For the first time, there are more than 2,000 COVID-positive Tennesseans in the hospital, at 2,009. Of these, 536 are in ICUs and 240 are on ventilators. Of the three, ICU beds are the closest to capacity, with 10% availability.

Testing, already at a low-average number of about 24,800 the day before, dropped to 17,600 reported tests yesterday. For the day, the state reported a 14.31% positive test rate, while John Hopkins puts Tennessee’s seven-day average positive rate at 14.1%. The state has given just under 4.2 million tests since the beginning of the pandemic.

For the first time since October 29, the Knox County Health Department has reported fewer than 100 cases for a day, with 92 reported this morning. It brings the totals for the county to 16,480 confirmed and 912 probable cases. 15,228 are counted as inactive, while 2,018 remain active.

Hospitalizations remain high at 86, up from 83 yesterday. 543 COVID-positive Knox County residents have been hospitalized since the beginning of the pandemic.

The delayed impacts of cases and hospitalizations are now being experienced in the county with a surge in deaths. The Knox County Health Department reports 6 new deaths today, bringing the pandemic total to 146 in the county. 18 people have died so far this week, nearly matching last month’s total of 21.

The Knox County Board of Health meets this afternoon at 5:00 pm. I plan to bring a report for tomorrow.

The University of Tennessee is reporting 86 active cases this morning, more-or-less in line with recent days and weeks. Of these, 73 are students and 13 are employees. 1,965 students and staff are now considered recovered. 10 new positive tests were reported for the day.

No recent clusters have been reported. UT Chancellor, Dr. Plowman who has been the face of the UT response is in quarantine due to exposure to a person who tested positive. Athletic Director Phil Fulmer has tested positive for the virus. He is reportedly asymptomatic.

Dr. Plowman led the briefing from her home, reporting that she has tested negative, so far, and is feeling fine. She reviewed the data above, and urged students to plan for departure, including taking a flu shot and getting a COVID-19 test. She reported that pooled testing last week yielded a 64% participation rate and resulted, so far, in six new cases.

Dr. Gregg noted that the number of active cases has slowly increased, though it appears to be slower than the increase seen across the county. He urged students to consider travel plans carefully with COVID safety in mind. He urged students to either not get together with friends back home or to do so masked and outside.

Dr. Plowman said on-campus testing for spring would be every week and would be extended to off-campus students. Dr. Crawford joined to discuss testing and vaccines. She said the vaccine will not likely be delivered in time to impact the UT plans for spring semester. She said summer vaccine availability for students would be the most hopeful scenario. Testing capacity for testing will be about 8,000 per week. On campus students will be required to participate. Rewards will be given to participants.

Today marks the final briefing for the semester.

The Knox County Schools are reporting a new record 135 active cases among students and staff. The total is an increase of 11 from the day before and includes 46 staff and 89 students.

The metrics remain unchanged from yesterday, with county-wide student attendance, bus service, and cafeteria support remaining green, while teacher attendance is in the yellow zone and custodial and substitute availability remain red.

Though not a public school, one of the area’s largest private schools, Webb School of Knoxville, is also making changes according to reporting from Compass. The news site reports that due to a spike in numbers, the upper grades will not meet in-person again until after Thanksgiving Holidays, at which point middle and upper grades will have alternating day schedules, in order to reduce the number of students physically in school on a given day. The effect is the same as the schedule in Oak Ridge, which reduces the number of contacts for any given student who may test positive.