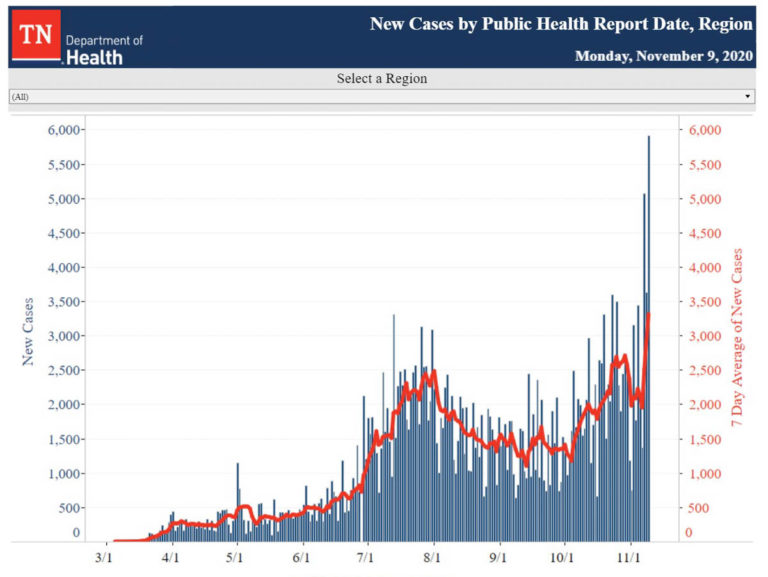 It’s another beautiful fall day, with temperatures running about 15 degrees warmer than the average. It’s a great day for a long walk as the days for warm walks dwindle. 2020 feels stranger as it goes. I doubt most of us will remember it fondly, but it has had its moments for some of us. I hate that Urban Girl and Boy are separated from their parents, for example, but I treasure the months we have had with them. I’ll take glass half full for $500, Alex.

As it has done three other times in the last several weeks, the state of Tennessee reported a new record of daily cases that outpaces the previous record by a large margin. The state reported 5,919 new cases yesterday, eclipsing the record of 5,071 set just two days earlier. In turn, that record had replaced one set just two weeks earlier, of 3,606 on October 23. To the state’s credit, the large numbers come as the state surges its testing program.

The 5,919 cases bring the state totals to 269,747 confirmed cases and 18,023 probable cases. 252,515 Tennesseans now have inactive cases of the virus and 13,622 people remain ill. Even as cases explode across the country, the large number landed Tennessee fourth on the lists of new cases among U.S. states. Tennessee would have ranked 16th in the world among other countries for the day. The seven-day average for cases in the state has now risen to 3,312 per day.

15 deaths were reported across the state, bringing the pandemic total to 3,610. Tennessee is currently averaging 33 deaths per day.

54 additional COVID-positive Tennesseans were admitted to the hospital, bringing the pandemic total to 10,732. As of 11/8, the state reported 1,553 COVID-positive Tennesseans were currently hospitalized. This continues a recent pattern of near daily records being set for current hospitalizations. Of this number, 461 are in ICUs and 213 are on ventilators, both pandemic records.

For the day, Tennessee reported more tests than in any other single day since the beginning of the pandemic, with 54,580 tests. It marked only the third time the state has reported over 50,000 tests in a single day. For some perspective in both directions, California routinely tests over 100,000 a day, Florida is often in the 60K to 80k range and has crossed 100,000 numerous times, and Illinois is now commonly hitting over 80,000 per day.

At the same time, Georgia has never crossed 50,000 and typically hits in the 20,000 to 30,000 range, Louisiana typically tests in the 20,000 to 30,000 range, but is very often below that. The state closes to Tennessee in population is Indiana, with about 700,000 fewer residents than our state. Their testing levels have been lower than ours earlier, but they are currently running very similar to our own. They reported on over 50,000 tests three days ago and are currently bouncing in the 20,000s to the 40,000s.

The bad news from the day’s testing sample was that even at that massive number, the positive test rate was a very high 10.95%, two to three times higher than we’d hope if we were testing an adequate number of people. Johns Hopkins University is reporting a seven-day average lf 11.2% positive test results. Their website is the source of all of the above comparisons and is a great place if you want to nerd out on testing data.

The Knox County Health Department reported a pandemic record 224 new cases today. No doubt, the large number is related to the increased testing coming out of counties across the state. It marks only the third time the county has reported more than 200 cases in a single day, with each of the others coming in September.

The daily total brings the pandemic totals for cases to 14,534 confirmed cases and 766 probable cases for the county. The number of active cases has now risen to 1,692, the highest that number has been since the new method of calculating was implemented on October 1. 13,487 people are now considered to have inactive cases.

Deaths continue to accumulate at a much faster pace than recent months, with two additional deaths reported today in the over 75 age group. The split above and below age 75 continues, as 56 people below that age have died and 65 people above that age have died, for our current total of 121. Sixteen Knox County residents have died of the illness in the first ten days of November, whereas 21 died in the entire month of October.

Dr. Gray, who has joined briefings earlier, and he began by noting that the spike we’ve seen this month and the fact that it has been sustained, unlike the spike in July. That has led to higher hospitalizations and he said the positive test rate has remained over 10%. He said we haven’t known until now, for certain, how the change in season would impact the spread of the virus. He expressed concern regarding the return of college students from around the country and the holiday gatherings coming up.

Dr. Browne thanked the community and the Health Department for their partnership. He said we have not seen a large number of flu cases and they are hopeful that will continue in order to avoid straining the hospital system further. Dr. Beuerlein made a case for being tested and explained the various types of tests currently being used.

Dr. Childs, noting that the virus isn’t as difficult for children, though they have treated some in Children’s Hospital, but the potential for spread through them is a concern, though the data has been mixed on that point. He discussed MISC which has hit a number of children around the world after they have had the virus. He said it can be successfully treated and has been treated here.

They all pleaded for the community to increase mask usage and following the other of the five core actions.

While still far below the September peaks, the number of active cases reported among University of Tennessee staff and students continues to trend upward. Reported at 82 today, it is one shy of the highest it has been in the last month. The number includes 77 students and 5 staff members.

1,821 have recovered and 10 new cases were reported yesterday. Isolations and quarantines have now increased to 390 as a result of the increase in active cases and is now at its highest level since September 26, when the number was dropping rapidly. The current number includes 52 employees and 338 students.

The single cluster discovered in the last two weeks relates to an off-campus Halloween party.

The Knox County School System continues to report a post-Fall Break surge in cases, isolations, and quarantines. The 82 active cases reported yesterday afternoon are up from 78 reported the day before and is a new high for the school year. Of these, 18 are staff members and 64 are students.

633 students and staff are now considered to have inactive cases and a new record 1,589 are in isolation or quarantine. The number sets a new record and reflects an increase of 157 since the previous day. For some perspective on how different the current numbers have become from those earlier in the year, this number is about 45% higher than the highest number prior to Fall Break, which was 1,095 recorded on September 23.

Of those currently in isolation or quarantine, 152 are staff members and 1,437 are students. Even with the higher numbers, the system metrics remain green with the two common exceptions of custodial staff and substitutes, both of which remain red.

In addition to South Knoxville Elementary School, which has been virtual-only for over a week, Whittle Springs Middle School has now gone all virtual and will remain so until November 23. It underscores that individual schools are judged by the same metrics as the system and some are hit harder than others in the various categories.