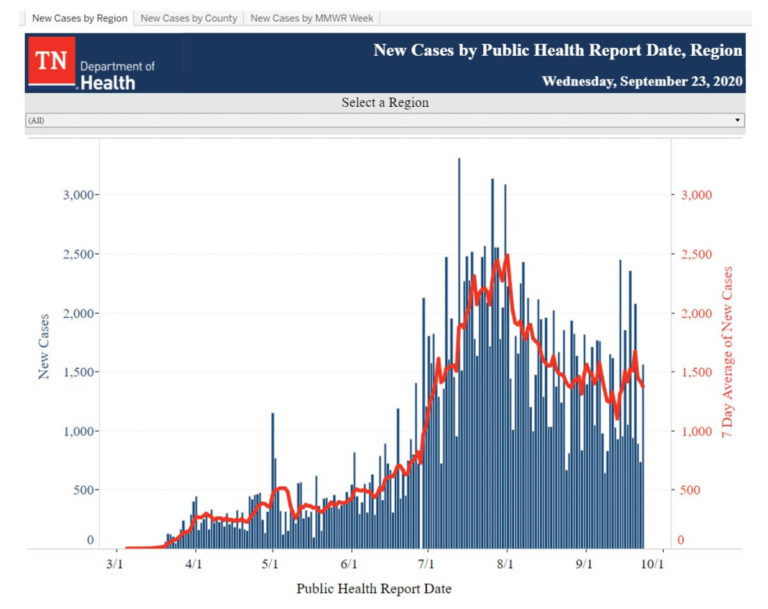 We disagree. That is human. We express our very different opinions. That is our wonderful gift as free people in America. We discuss our differences. That’s how we grow, if we listen. But then we attack and demonize those with whom we disagree. Telling someone who disagrees with you that they are evil, ignorant, blind followers, weak, and afraid will never invite them into agreement. If both sides see the other as evil, there can be no compromise.

The bitterness and cynicism, the self-righteousness, the absolute certitude that we and we alone know the TRUTH, will destroy us as individuals. It damages our country and, so, is un-American. We have an obligation as citizens to form our opinions based on facts presented from reliable sources, to listen to others, and to respectfully advocate for our position. In the end, we make our best, informed decision and act accordingly, disagreeing with others, no doubt, but not de-humanizing them.

The state of Tennessee reported 1,561 new cases of COVID-19 yesterday and 14 Tennesseans died of the illness. 180,083 cases have been confirmed and 6,626 are reported as probable. 169,649 people are now reported to have inactive cases. 2,275 people have died from the illness since the onset of the pandemic.

75 additional COVID-positive Tennesseans were hospitalized yesterday. The net number in hospitals across the state, however, dropped for the day from 794 to 708. The number is the lowest it has been in six weeks, as it has more-or-less steadily declined over the period. There are currently 240 COVID-positive Tennesseans in ICUs and 114 on ventilators. These numbers have also sharply declined over the same period.

As close followers of the data will have been able to guess, given that yesterday’s number of cases more than doubled from the day before, reported testing increased from about 12,000 each of the previous two days, to almost 22,000 yesterday. The state reported an 8.25% positive test result rate for the day, while Johns Hopkins University reports a seven-day average positive test rate for the state of 5.7%.

The Knox County Health Department is reporting 60 new cases today, bringing the pandemic total to 9,400 in Knox County. Of these, 8,024 cases are considered inactive and 1,712 are active. There are 413 probable cases. No additional deaths were reported today, leaving the total at 77.

Benchmarks, which I mentioned in this morning’s article, were updated yesterday. The new case benchmark was moved from red to yellow and otherwise, all benchmarks remained unchanged: Green for public health capacity and yellow for testing, hospital capacity and deaths.

Charity Menefee and Dr. Buchanan each spoke at today’s press conference. They thanked Liliana Burbano for her work with Spanish language messaging. Charity focused on safely enjoying football with friends this weekend. They suggested watching outdoors, keeping distance and wearing masks if that isn’t possible. They recommend pre-plating food rather than gathering around a table. Wash hands often and sanitize commonly touched surfaces, such as remotes.

She reviewed the above data and the benchmarks. She said they are going to focus on the data regarding testing for the next several weeks to determine what is happening. She said the positive test result rate is running just over 8%. Twelve new members to the contact tracing team were added since last week.

The University of Tennessee is reporting 135 active cases, including 128 students and 7 staff members. The number is up three from yesterday. 1,304 are reported to have recovered. There are 650 in isolation, down from 685 the day before. Of the 650, 56 are employees, 283 are on-campus students and 311 are off-campus students. No additional clusters were reported.

The Knox County Schools report 58 active cases, including 45 students and 13 staff. 225 have recovered. The number of active cases is up from 44 reported the day before.

There are 1,095 people in isolation or quarantine. Of these, 1,004 are students and 91 are staff members. The number is up from 979 the previous day. Halls High School remains the only school on complete virtual learning.