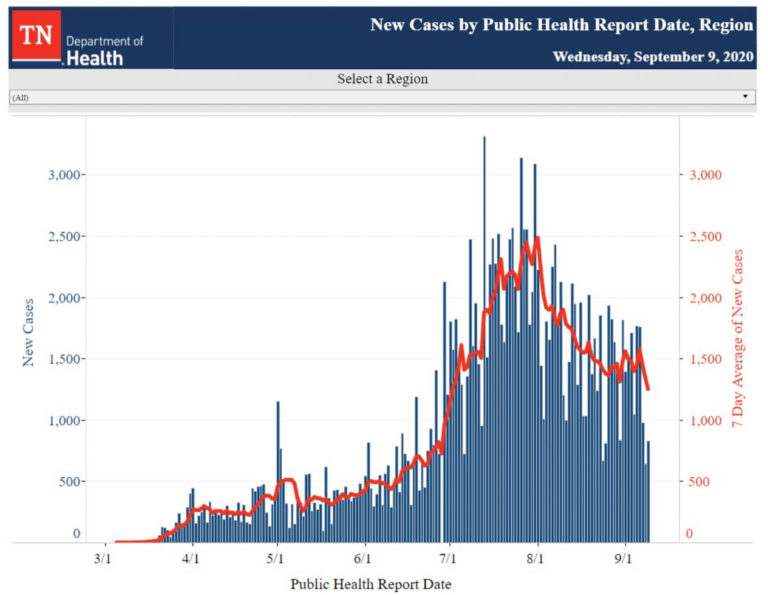 The state continues to shift the way it reports data. For example, the number of cases on the front page of the state Covid site is now including probable cases, and I am separating them out. For that reason, my number will be lower than theirs. They are also putting probable deaths with the others and I’m not sure if that is new or has been the practice. There are currently only 56 probable deaths, so I’m leaving them in to avoid listing a new number.

The front page also includes hospital numbers that lag a day behind the numbers on the graph, which is buried below the front page. I will use the graphs, meaning my number will be different from the front page each day and a day ahead. I’ll try to spare you future updates on these kinds of details, but the state keeps shifting and I want to preempt questions about my data.

848 COVID-positive Tennesseans are currently hospitalized, down by 18 from yesterday. 89 new patients were admitted yesterday. There are 284 COVID-positive patients in the ICU and 143 on ventilators. Each of these numbers are considerably lower than a month earlier: 1,093, 397, 173.

The spike in deaths in the state in the last two days probably reflects a true increase, but a larger spike because (I’m speculating) the two previous days didn’t have all their deaths reported into the system due to the holiday weekend. The four days’ number of deaths were 3, 4, 27 and 35. The seven-day average of daily deaths is 19, after remaining mostly in the 20’s for the last month.

The Knox County Health Department reported 121 new cases of COVID-19 today, bringing the total to 7,877. (As above, I am separating probable cases, though other local media sources do not.) Thirty-eight people COVID-19 positive Knox County residents are currently hospitalized, bringing the total since the beginning of the pandemic to 297. There were no additional deaths reported and there are currently 283 probable cases. 6,249 cases are now inactive.

Dr. Buchanan led today’s meeting and expressed thanks to the technical support staff. She talked about safely going to the gym. She recommended calling ahead to learn guidelines. She said wear your mask if you are within six feet of anyone. She recommended wiping down machines before and after use and washing hands.

She confirmed the numbers above. She discussed the benchmarks, which I reported yesterday. You can review those here. One benchmark (cases) is red, three are yellow and one is green (public health capacity).

*Questions as reported are condensed for brevity, as are answers. Not all questions are included (some have been answered, some are not answered, some seem too far afield).

The University of Tennessee is reporting 662 active cases, of which 9 are staff members and 653 are students. 373 students have recovered from the illness. The number of active cases increased by 40 (6.4%) overnight and has more than doubled in one week.

The number of students and staff in isolation/quarantine is high, but has leveled off. There are 2,023 in isolation today, compared to 2,014 yesterday. Of these, 70 are employees of the University and the remainder is students, with a slight majority of those being students who live off campus. About 43% of these are in quarantine because they are a close contact.

Knox County Case numbers continue to remain relatively low, with 54 total cases. Of these 38 are students and 16 are staff. Despite what the graph shows above, today’s total reflects an increase from the previous day of 9 cases, or a 20% overnight increase. While the numbers are small, that rate of increase would lead to a doubling every four days.

126 students and staff have recovered and 823 remain in isolation or quarantine. Of these, 747 are students and 76 are staff. The day prior, the school system reported 829 in isolation/quarantine, so that number seems to be holding steady.

Defining a “close contact” is a difficult call for school systems and the policy on who is considered a close contact varies. Some school systems quarantine whole classes and the teacher if a student tests positive, while others insist if everyone had masks and were seated six feet apart, they are not a close contact. (Ed. Comment: It seems to me Knox County is applying the stricter standard, but as the Knox County Health Department works with them, I expect fewer students to be quarantined.)

All benchmarks for the school system remain unchanged with the exception of custodial staff which returned to yellow from its brief stint on red. The primary concern remains substitutes and that metric remains red. Cedar Bluff Middle remains the only school on exclusively virtual learning.