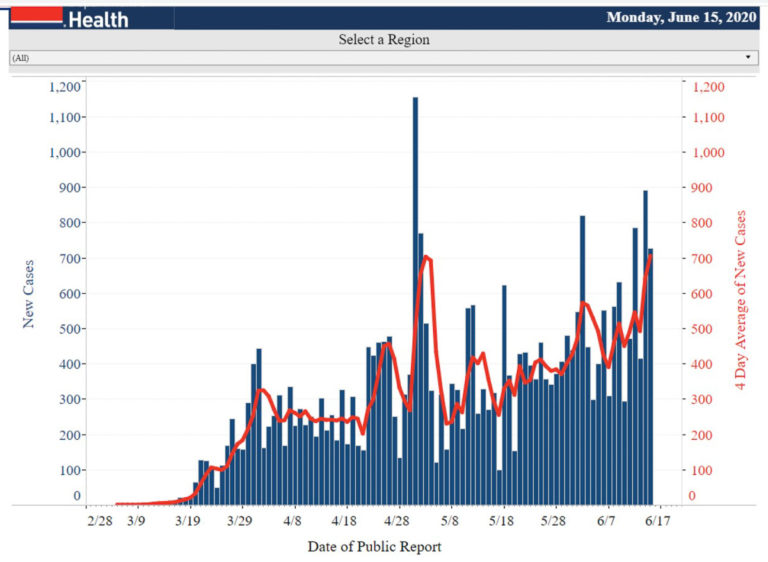 Time has always played tricks on my mind. For example, sometimes something can seem like it’s from a long-ago world, but it can seem like yesterday at the same time. The weeks and months are like that for me now, are they the same for you? It seems a month will never end, then we find ourselves suddenly in the second half of the month heading to the next. I can’t believe it’s been over three months since this suddenly seemed so serious. Or that it could be much longer than that before we resume pre-pandemic normal.

There are currently 8,150,931 confirmed cases of COVID-19 across the world and 439,92 deaths. Yesterday saw 124,600 cases and 3,415 deaths reported. Trends remain the same, with new cases increasing fairly rapidly and currently averaging about 131,000. Deaths continue to remain about even and are currently averaging between 4,200 and 4,300 new deaths each day.

The U.S. and Brazil continue to trade the top spots in both deaths and new cases. Yesterday, Brazil topped the world in new cases with 23,674 an in deaths reported, with 729. The U.S. was second in each category and India was third. Russia continues to report roughly the same number of new cases and the identical number of critical cases day after day.

India’s testing program is improving slightly, but is still a small drop in a large country, as is Brazil’s. The U.S. has given more tests than any other country, with over 25 million. Russia is second with 15 million. The top semi-populous countries (over 1,000,000 population) in per capita testing are the United Arab Emirates, Bahrain, Denmark, Lithuania and Cyprus. The top modestly to populous countries (over 10,000,000) are Russia, Spain, the U.K., Portugal and Belgium.

The largest numbers of new cases are concentrated in a few countries, with Brazil, the United States, India and Russia confirming about 65,000 of the world’s 124,600 new cases yesterday. At the same time, whether simply being confirmed now due to testing or resulting from new spread, twenty-one different countries around the world reported 1,000 or more new cases yesterday.

The best news of the day may be a new study out of Oxford that finds a cheap, readily available steroid reduces deaths of COVID-19 patients who are placed on ventilators by about 1/3. Recommendations are immediate for its use. In other good news, Africa seems, so far, to have been spared the dire scenarios previously predicted. A significant number of countries there aggressively shut down their economies early, but the low numbers (outside of South Africa) have been a pleasant surprise to epidemiologists.

There are currently 2,188,198 total cases and 118,487 deaths in the U.S. since the beginning of the pandemic. Yesterday, 20,722 new cases were added and 425 people died. Each number was the second worst for the day in the world, behind Brazil. The average number of daily new cases is just over 22,000 and has been fairly stable for the last three weeks. The number of deaths each day has continued to steadily decline and is now just over 700 from a high in April of over 2,200 per day.

Yesterday, four states added over 1,000 new cases to their totals: California (2,719), Texas (2,138), Florida (1,758) and Arizona (1,014). As has been increasingly the case in recent days, southern states continue to be among the hardest hit and see numbers growing larger. Joining Texas and Florida in the top twenty highest daily case totals yesterday, were North Carolina (#5), Georgia (#6), Tennessee (#7), Alabama (#9), South Carolina (#10), Louisiana (#11), Arkansas (#15) and Virginia (#17). With only Mississippi missing, all southern states are represented and comprise seven of the top ten hardest hit states yesterday.

As of yesterday afternoon, Tennessee reported 728 new daily cases, seventh worst in the country for the day, bringing the state total since the beginning of the pandemic to 31,160. As seen on the graph above, our trend is clear. 166 were reported to have recovered, meaning the state added a net of 562 active cases for the day to bring the total to 11,098. The number has been steadily increasing.

At the same time, businesses, including ones that attract large crowds are opening around us. Dollywood opens Wednesday with a number of precautions. The new 50 acre Smoky Mountain Waterpark opens in Sevierville on June 27. Others are trying to adapt previously crowded experiences to form a similar, but safer experience, like the Drive-in Concert Series scheduled to start this Friday in the Smokies Stadium parking lot.

Closer to home, the Knox County Health Department reported an increase today of seventeen new cases. It marks the ninth time our daily numbers have crossed fifteen. Three of those days were at the beginning of the pandemic and before sheltering in place. Six of those have come since May 30.

Out of a total 590 cases since the beginning of the pandemic, 102 are currently active cases and four are currently in the hospital. Since the beginning of the pandemic, the largest number of cases in an age group is among those in their 20s (127) and the largest number of hospitalizations has come among those between 45 and 64 years old (22).

The highest concentrations by zip codes are 37921 (57 cases) which runs out Western Avenue, 37923 (56 cases) which is the Cedar Bluff Area, and 37920 (39) which is South Knoxville. Downtown (37902) continues to be reported at 0-5 cases. These locations are of modest usefulness, as residents move all around the city and county to visit, shop and dine.

There have been no additional deaths, with that number remaining at five. There are 20 probable cases.