Enjoying Sports in the City 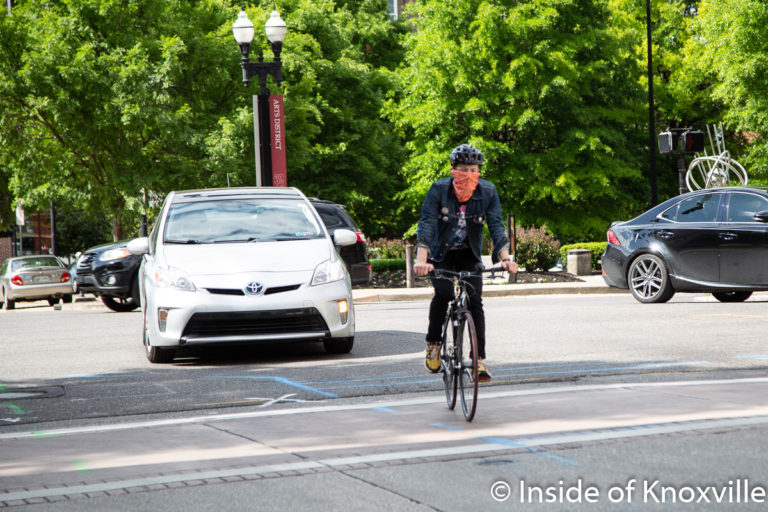 Cycling in the City During the Pandemic, Knoxville, April 2020

I’ve found myself with a little time on my hands recently. Maybe you have, too? A good pastime would be helpful, right? I remember when it first began dawning on me that I might be spending more time at home for a while. The NBA may have taken a break, but the SEC and NCAA basketball tournaments were looming. I’ve never been able to simply chill and watch a lot of the games. Not so shabby! And then they were cancelled.

In a lot of ways I’ve been told for years that I don’t project the Alabama redneck that people might expect. I grew up in south Alabama, but left there when I was 21. As a young guy I enjoyed hunting, rodeos, fishing and running around in the woods on my grandmother’s property where she owned about 400 acres of swamp land and forest.

But, I left home, collected college degrees for a while and moved to Tennessee. My perspective on a lot of topics no longer matched my raising. Except for one thing: If you want to see me channel my inner redneck, plop me down for my favorite college team on a football field. A bit behind that, because I’m southern, is college basketball.

I look forward to recruiting and pour over recruits stats. I can’t wait to read reports from spring drills and the spring game is must-watch tv. I want to know how hard the linemen are working in the weight room during the summer and I want to know how many hours the wide receivers are spending catching balls from the starting quarterback. Summer drills are the appetizer and the season is the centerpiece from the year.

My favorite season is fall, but a large part of that is because it is also football season. Basketball has grown on me. Still, I’m only interested in my team when they play. I don’t generally watch any other basketball. I’ll watch my team play volleyball, soccer, baseball or compete in gymnastics. Pro sports? I’m bored. Auto racing? Just never has made sense to me. I drive a Prius, which probably tells you all you need to know about that.

So, what to do with all this extra time? Well, as it turns out, I did start writing two columns a day, which is something I didn’t really set out to do, so that takes some of my time. I’m not much of a television watcher. Movie references go right past me. I intended to read more, but that hasn’t happened. I learned to make a pretty good margarita, so there is that.

As it turns out, however, sports is available in the city. And not just the re-runs on ESPN which I would rather drink clorox than watch. Ok, maybe not that, but I would never watch re-runs of sports unless it was my favorite team winning a championship. So where did I find sport viewing? Well, I found it around downtown, but mostly, I’ve watched it from my balcony.

The parking lot, street and parking garage I can see from my balcony offer a wide range of programming in the world of sports. I’ve probably watched more sports in the last eight weeks than I ever would have watched under normal circumstances. I’ve really enjoyed watching the family in the first photo above. I don’t see the child in the photo, but there is a child and these parents have worked out with their child almost every day, running, jumping, playing soccer and all sorts of active games.

While soccer vs. each other has been a thing, not all of us are sheltering with a soccer opponent. In the second photo, we have a social-distancing version of the game in which the player opposes the wall. The wall rarely let the ball slip by. I’d have to say the wall tends to win most of the sporting events.

We may not have the U.S. Cycling championships as we’d planned in downtown Knoxville this year, but there’s a lot of cycling competition. The two bearded dudes in the first cycling photo are pros, but we’ve watched many people cycling up that little hill. Bets might be placed on how far they might get before standing from the saddle to pump harder or, in the worst case scenario, step off the bike to walk up the hill.

Other cycling competitors seen around downtown are sporting straw hats or cool new bandana masks. The cycling speed trials were held on the state at the World’s Fair Park and I was lucky enough to score a ticket for that. Cycling isn’t the only speed sport we’ve enjoyed. Long distance running has taken its rightful spot in the sports pantheon. I’m not sure how far each of them runs, but once they’ve traversed from as far as I can see (about 200 yards) from left to right or vise versa, quite frankly, I’m exhausted.

The wall comes into play with tennis, as well. By the time I was a teenager, we’d moved from the house trailer on my grandmother’s property up a few steps to a small house on a street that had a public tennis court down the street. I got to be pretty fond of the sport, though it’s been years since I’ve played. I’ve never watched much of it before, but I enjoyed watching this match quite a bit. I could have told the guy before he started that the odds were on the wall. It’s just that good. Solid. Wall won.

Remember those dog shows? Maybe you’ve watched the one that comes on after the Macy’s Thanksgiving Day Parade, I believe it is. I never watched it. Boring. But we’ve developed a new appreciation for dog shows from the comfort of our balcony. We’ve got our favorites, but I won’t risk hurting the feelings of any of my canine readers.

We’ve also enjoyed watching our neighbors exercise on the top of the parking garage. They’ve done sprints and exercises of which I know not. The highlight has been the corn hole tournaments. Some of them grow intense with agony and exultation. They are pretty good. I could take them. I told them so. I haven’t quite decided to leave the balcony to do it, just yet.

There have been some surprising sporting events viewable from the balcony. I never expected to see snorkeling in the parking lot. Apparently water isn’t required for the sport. Who knew? Not long after observing the snorkeling, the next obvious step was for a bikini clad woman to arrive. So far, she is Miss Quarantine Bikini Winner. Maybe that sound of traffic from James White Parkway really is the crashing of the ocean waves as I am prone to close my eyes and imagine.

Not pictured, but pretty common are the omnipresent skateboarders. It’s a great hill if you’re going in the right direction. That event was won by the guy who could hop between the sidewalk and the street as he went down the hill. Conspicuously missing is yesteryear’s hottest sporting topic in downtown: scooters. I found them in a walk over near the Fourth and Gill neighborhood, parked and safe. I suspect they will be back.

So, as you can see, I’ve enjoyed many hours of sports since the beginning of the Great Shutdown of 2020. It’s not football or March Madness. My team colors haven’t been seen once. Still, given the comfort of my balcony, the price of the ticket and a cool beverage, it’s not all that bad. Happy Friday, y’all.

Same rules as before: “like” Knoxville Page on Facebook to help us help local businesses and donate at least $10 to something supporting COVID efforts or to someone impacted by the pandemic. Confirm in the email that you’ve done both and tell me how much and to whom you donated. Each entry requires its own donation. If you cannot donate at this time, enter anyway and just say so. It’s all good. The contest runs until midnight Friday night.

In the meantime, if you’d like to have access to multiple local gift card purchase options at once, visit Knoxville Page. If you’d like to have your business represented there, send me an email at Knoxvilleurbanguy@gmail.com and I’ll connect you up. During this difficult time, all money for gift cards goes directly to the business you choose to support.