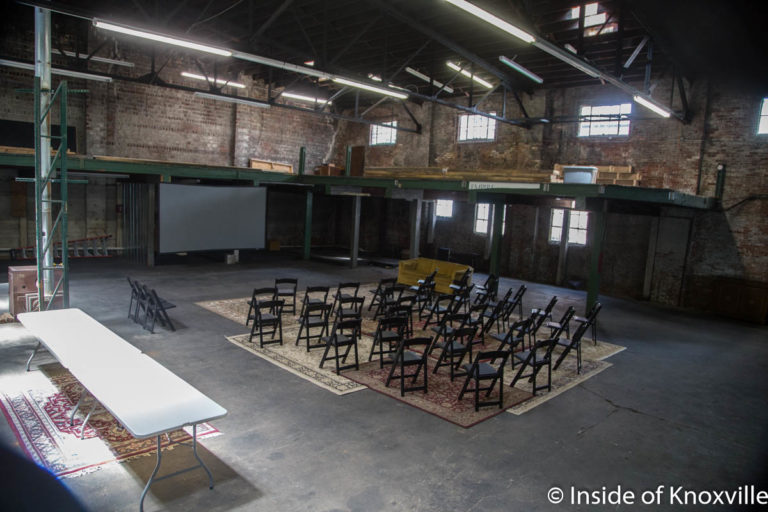 Inside the future home of the Old City Performing Arts Center 111 South State Street, Knoxville, May 2019

While many businesses have developed clever ways to deliver some semblance of their services while on shutdown, others simply do not work with the restrictions we’ve had in place. As the restrictions are slowly removed, more businesses are able to operate at some capacity. For others, it’s not so easy, even now. Imagining theatre shows or live music in various venues is difficult, at best.

Phase two of Knox County’s reopening allows theatres to open as long as they are able to meet certain restrictions. Parties of no more than ten may be seated together and each party must be spaced at least six feet in every direction from any other parties. For small venues, this would leave them near empty. Even for larger ones, this would reduce capacity to such a degree that covering expenses for the event, or making a profit, would be very unlikely.

In the months leading up to the pandemic, downtown Knoxville’s newest entertainment venue opened its doors. The Old City Performing Arts Center, home to River and Rail Theatre Company and with plans to host other groups and events, offered a mid-sized theater with seating to accommodate events smaller than the Bijou Theatre. Just as it got off to a promising start, it had to close. I checked in with Joshua Peterson, co-owner and artistic director to learn the status of the venue at this time.

As for River and Rail, Josh made it clear upfront, “We have no idea when we can produce again.” That blunt assessment comes in the aftermath of producing “Constellation,” the theatre’s first production of 2020. “We were seeing ticket sales drop. Where we usually cover 55% to 60% of the costs of a production, we only made back 25%.” Near the end of the run, it was clear they could not finish and they closed the production early.

They also cancelled the next production, “Sweat,” before the beginning of rehearsals. “We had great actors lined up and everyone was disappointed.” A set of performances as a part of Big Ears and other bookings were cancelled. With a lack of clarity about the future, it is impossible to schedule groups or events.

They began following prominent production companies locally and nationally to see if their responses might yield some clue as to the best path forward. They found numerous paths, most of them aggressive in the direction of shutting down. They found that the Guthrie Theatre in Minneapolis announced they were closed until March 2021. The Guthrie initiated a donor campaign to sustain themselves in the interim. Similarly, the Oregon Shakespeare Festival cancelled its 2020 season. Broadway is cancelled through September. The Actors Equity has stopped offering contracts.

The question, he said, is “How do you do it safely?” Plans were in place for a major premiere this spring featuring a play surrounding the story of Harry and Febb Burn on the 100th anniversary of women’s suffrage. Major fundraising surrounding the premiere was to take place in March and April. That fundraising cannot be replicated in the future and, while the play may be produced later, the 100th anniversary and the momentum that would have provided, will be past.

He expressed gratitude to the donors who previously made pledges to the theatre. They have all continued to honor their commitment and it is helping sustain them. Raising additional money at this time, he pointed out, is difficult. The group was able to secure a PPP and other loans enabling them to pay their three W2 employees. Unfortunately, most of their payroll goes to contract workers and the assistance has made no provision for them.

One of the variables which will persist even after restrictions are lifted, is public confidence in their own safety. The Old City Performing Arts Center participated in a large national survey which will offer a glimpse into when people might be ready to return to a theater. That, along with when a large enough audience would be allowed to make it financially feasible will go a long way toward dictating any next moves.

Saying, “We’d rather open late than early,” Joshua pointed out that it would take three to four months from the moment productions are given a green light to the time they would be prepared to mount a production. Regardless of what is happening at the end of the year, they plan to somehow share their annual production of The Unusual Tale of Mary and Joseph’s Baby.

River and Rail has not been inactive, however. Joshua and Amelia immediately began thinking of what they might do to continue being creative during the shutdown. On March 17 they began developing a documentary about the lives, during the pandemic, of middle class artists from twenty-two households across the country, which include recording artists, actors, film makers and more.

They’ve each been filming their lives during the pandemic and sending the footage to Joshua and Amelia who have now amassed 400 hours of film. “We felt like if we were forced into a digital world, we wanted to do a digital project.” They are currently developing a trailer and will be looking for donors and investors.

As for the venue, they have several concerts tentatively on the calendar, but it is unknown if they will happen. There are events scheduled for next March. The venue, which can hold 216 seated or 270 standing at capacity, would be economically difficult to book at substantially less than capacity.

Thanks to their steady donors, they are hopeful about their future. The longer term concern would come if there are additional setbacks with new waves of the virus and attendant new waves of restrictions on live events. They are searching for grants and developing a new website which should be live by the end of June.