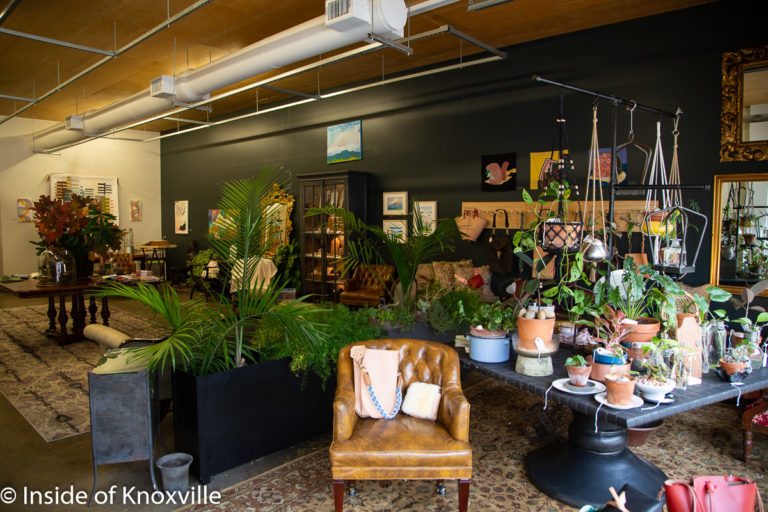 It was a long and sometimes circuitous journey for owner Megan Stair, from her birth place in Indiana to her new gallery, 214 Magnolia (at 214 Magnolia Avenue!). As with many such journeys, each step of the way prepared her for what she has long wanted to do: present artists in the right kind of space for their work to find its audience. She thinks she has found it in the new gallery.

Her family moved to Loudon when she was eight years old to be nearer her mother’s family. Her mother taught school in Kingston, and when the family moved into Knoxville when Megan was fourteen years old, she completed school where her mother worked. After finishing school, Megan attended UT for a year before taking a job at Bennett Galleries.

Her entry into the world of art came in high school when she began sewing “hippie clothes.” She continued working with textiles, attending Penland School of Craft, where she studied weaving for two summers. In the fall of 1996 she took her sewing skills to the Hemp Store in Asheville, where she did special order sewing. The shop eventually became a custom clothing store. This job, along with selling clothing at festivals, allowed her to support herself with her art.

In 2000 she her then-partner purchased the store located on Wall Street next to Laughing Seed in Asheville. The couple later moved the store to Biltmore Avenue next to his salvage store and Mast General Store. The couple “took apart old homes and reused everything.” After a few twists in which they sold both stores and later got the salvage store back, the couple split, and Megan moved back to Knoxville in 2005.

Back to where the journey started, she met and married Caesar Stair IV, local attorney and chair of the board for the Knoxville Museum of Art. The couple has two children. She worked for a time at the Knox Heritage Salvage Shop and, again, at Bennett Galleries, along with a couple of other places. She kept thinking about having her own gallery, curating the artists there, and serving them by helping them find the right audience.

Last spring she started a conversation with Eric Ohlgren who owns the building that contains Public House. The end space had been vacant since Magnolia Records moved out and it appealed to her. She likes that the area is still gritty and thought it might be the gallery she’d been imagining. In September she took the plunge, and from there many pieces have fallen into place for the new business.

She’d been working part-time for Taryn McLean and Caroline Smith, co-founders of Help You Dwell. With them she saw an opportunity to offer furniture on consignment as a service for their clients. They were also looking for a new home base after the closure of The Hive, and Megan’s new spot had an extra office. Help You Dwell moved in, and the two businesses share the space. You’ll find furniture from some of their clients offered for sale in 214 Magnolia.

Megan has a personal relationship with many of the artists represented by her gallery. You’ll find her brother Ryan Blair’s paintings, and the vast majority of the artists are from Knoxville. A jeweler is from Chattanooga and the potters are from Asheville. She has a striking collection of vintage nudes by Herbert Art. You’ll find art from Brigid Oesterling and Jessica Weiss, as well as purses and leather goods by Joanna Warren. Sprinkled throughout are beautiful plants by gardener Mandy Carris.

The shop has officially opened with hours Thursday from noon to 7:00 p.m., Friday and Saturday noon through 9:00 p.m., and Sunday 1:00 p.m. to 5:00 p.m. The Grand Opening is tonight starting at 5:30 p.m. Join them for snacks, drinks, and an opportunity to begin exploring this newly curated collection of fine art.

Editor’s Weekend Bonus: After you stop by the open house, if you feel a little Cajun dance move bouncing around and through your legs, take the short walk over to The Standard for the annual Fais Do-Do featuring Louisiana’s Pine Leaf Boys and Roux Du Bayou for a fun evening of dance and music benefiting the Legacy Housing Foundation.