Happy New Year – With a Little Help from the Black Lillies 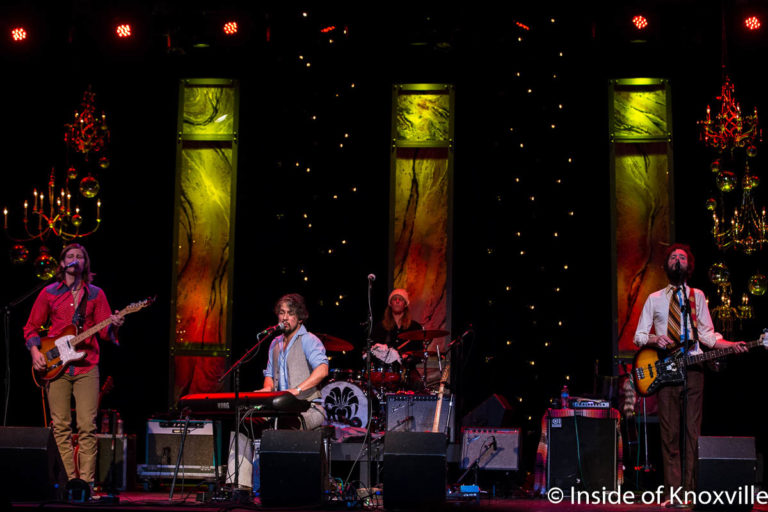 This one’s going to be short and sweet. I simply want to wish each of you a Happy New Year and serve up a side of the wonderful Black Lillies show last night at the Bijou. I haven’t been ready for live music the last few weeks, but this night brought me as close to back in the groove as I’ve come.

Mike Farris opened the show and that would be enough if it stopped there. The guy is great. He’s done every kind of music and, while in recent years he’s been more known for singing gospel music, he seems to have shifted, once again, this time towards ballads. He has one of the best voices in music anywhere and his Gospel Grammy is likely as much a testimony to his vocals as to anything. Sporting a new haircut, it was great to see him on the stage where I first saw him a decade or so ago for Tennessee Shines.

He was followed by Nora Jane Struthers and the two briefly shared the stage while he vamped to Rick James’ “Mary Jane,” replacing “Mary” with “Nora.” She and her band offered an excellent set, as well. She has a perfectly charming stage presence and the band is obviously very tight. I last saw her at Rhythm N Blooms where she appeared on the big stage delivering a similarly satisfying show.

This was, of course, the Knoxville debut for the new configuration of the Black Lillies, which now consists of Cruz Contreras on lead vocals, guitars and keyboards, Sam Quinn on bass and vocals, Bowman Townsend on drums and Dustin Schaefer on lead guitar and vocals. The band already has that crisp feel of a group that has put in some miles and some nights together.

The show began with solo Cruz Contreras on stage who was then joined by Sam, followed by Dustin and later by Bowman. The symbolic introduction of the members to the city worked very well and some of my favorite songs of the night were the first few acoustic songs featuring fresh material and excellent harmonies.

From there, the show rocked. Set against beautiful, if simple production elements – chandeliers, banners and lights, the stage was perfect for the band. The crowd responded well to the new material as well as to the old and the band seemed to have a great time. The musicianship across the board in this lineup is stellar. Sam is always a force of nature on the bass, but Dustin stole his share of moments, as well.

The band vamped around a bit with a version of Europe’s “Final Countdown,” as we approached midnight. Darrien Thomson slipped on stage to produce over-the-top dry-ice fog for the moment. The crowd was issued champagne and everyone toasted in the new year. Cruz sang “Auld Lang Syne,” and Mike Farris joined him for a fun version (CCR’s arrangement) of Leadbelly’s “Midnight Special.” A few more songs and they called it a night.

The band should be recording a new CD soon and it’s one I will greatly anticipate. There are songs in the new material which I like as much or better than anything in their catalog. I will have additional photographs on the Inside of Knoxville Facebook Page later on.