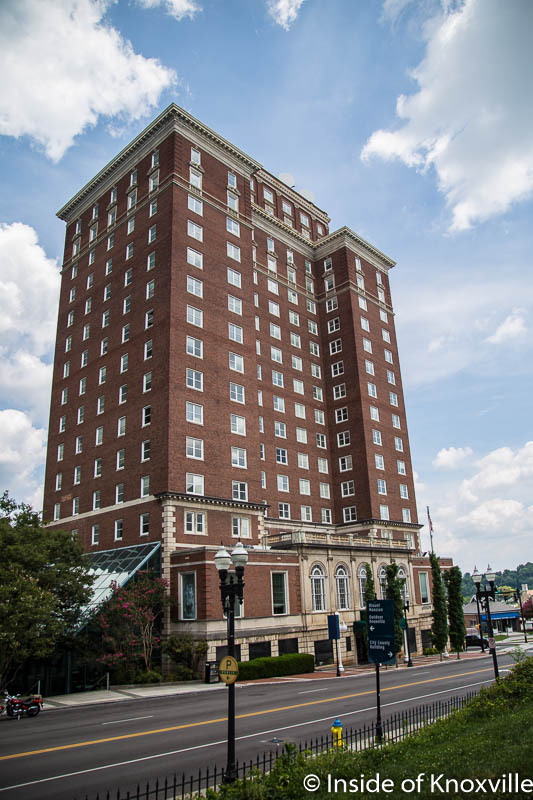 As I mentioned last week, the Andrew Johnson Building, formerly the Andrew Johnson Hotel, currently owned by Knox County and used primarily as a home for the central offices for the Knox County Schools, has been offered for sale to the group offering a winning proposal. Previously we looked at the proposal by LHP and Conversion Properties. Today we look at a second of the seven proposals, this one offered by Terminus Real Estate and Legacy Capital Partners. The group was most recently featured in this space in reference to the planned Stockyard Lofts.

Working with partners Merit Construction and Design Innovation Architects, the groups propose a combination of 125 hotel rooms and somewhere in the range of 20 apartments on the upper floors. Leigh Burch, of Terminus Realty said it started with the question, “What is the right thing to do with this building?”

Pointing out that it was designed by notable Knoxville architects, Baumann and Baumann (Downtown Post Office, Minvilla Manor, Tyson High, Knoxville High, South High, Immaculate Conception Church, Carhart Bldg, Central United Methodist Church, Cherokee Country Club), he continued, “This is arguably their masterpiece. That building is a hotel. It was designed to be a hotel.”

Given the feeling that the building should be largely returned to its original use, they are proposing a full service hotel for the first twelve floors. A high-end restaurant would be included on the ground floor with patio space provided by removal of the atrium currently located on the north side of the building (a feature added possibly in the 1970s). The upper six floors of the hotel will be residential with high-end condos. The top two floors, which are inset from the rest of the building would be two roughly 2,000 square foot units each with 500 square foot rooftop patio access, private elevator access and private parking included.

While agreeing with the idea that workforce affordable housing is needed in the city, the Leigh and partner Daniel Smith question if this is the right place. Their enthusiasm for a hotel usage is not simply nostalgia, they say, but a perceived need for downtown hotel space which they say is based both on occupancy levels (their figures for downtown indicate a five year average of 65.8% and more recently, over 70%) and the idea that hotels do more, more quickly to fuel the success of other downtown businesses.

Leigh pointed out that Asheville is half the size of Knoxville, yet their downtown has a much higher density of hotels – and that isn’t counting the nearby resorts. They also have much higher rates than the hotels in Knoxville. Greenville, South Carolina is also similar and has flags downtown Knoxville does not have.

The group also feels increased hotel rooms will move Knoxville closer to being a twenty four/seven city and the fact that hotel guests eat out every night is one reason they are willing to plan a high-end 5,000 square feet restaurant as part of their project. Additionally, hotels generate money that isn’t currently in the market by bringing non-residents into our business market.

The two point out that without the right kinds of hotel rooms conventions and other groups bypass Knoxville, implying that “if we build it they will come” holds some truth. They have the support in the endeavor by Cambria who is committed, if the proposal is accepted, to bring one of their Choice hotels to the space. The company is convinced the market will support the move.

Structural changes will also be incorporated into this plan. As mentioned above, the atrium, which covers what was once a swimming pool, will be removed. In its place two terraces will offer outdoor space for both the restaurant at the lower level and the event space and bar at the mezzanine level. A three story appendage off the back side of the building will be converted to two, two story, town homes facing Hill Avenue, with the third floor having hotel rooms. The town homes would be sold to private buyers.

While the plan includes such touches as restoring the grand staircase in the lobby, the most dramatic structural change involves the front of the building. Originally including three terraces across the front, two were removed and incorporated into new structure for the building. This is a change, expanding the size of the ballroom dates to the 1960s.

In this plan, those additions would be removed and the facade of the building would be returned to its original appearance. Estimates for this portion of the project alone runs to around a million dollars. Originally conceived (and labeled as such in one of the historic photographs here) as the “Tennessee Terrace Hotel,” by an Atlanta firm which failed to complete the project, it was likely intended to be Knoxville’s answer to the Georgian Terrace Hotel in Atlanta (1911). Leigh said, “Terraces were an original part of the design. It’s important for us to bring them back.”

They feel this is the best use of the building and the groups they have brought together for the project have the right experience and resources to make it happen. Members of the team have worked on the Commerce Building, Sterchi Lofts, the Farragut, the Medical Arts Building and others. As is fitting for its history, the new hotel would retain its historic name and be called the Andrew Johnson Hotel by Cambria.