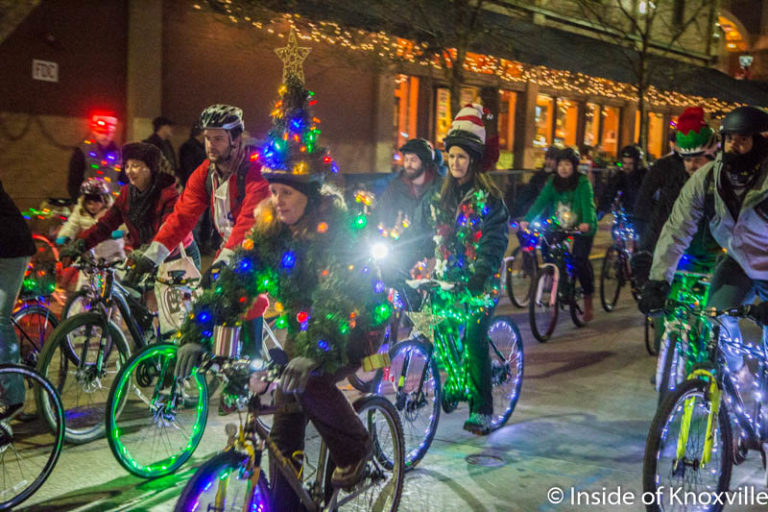 The 2016 Tour de Lights rolled from Market Square through the streets of Knoxville last Friday night and for the third consecutive year, organizers estimated the crowd at over 1000 participants. Certainly, the square was full of decorated, colorful bikes, people of all ages and a lot of smiles.

There was one – and at this point, words fail me – float? bike apparatus? that stood out from the staging area and in the parade. A fifteen-foot (my guess) Santa mounted on a tandem bike towered over everything in sight. As I passed it before the event, someone asked, “How is that possible?” The answer came from within the massive Santa, “Because physics.” I have never claimed to understand physics, so I can’t imagine how the thing stayed balanced and didn’t kill everyone in its vicinity.

As it caught my eye, it caught the eyes of the judges, as well, and later that evening Wes Breitenbach was pronounced “Best All Around,” for the contraption. Other prizes were given, as well, and a complete list of winners is to be posted both to the Tour de Lights Facebook page and to the I Bike Knox website. I Bike Knox sponsored and organized the event and they should have additional photos.

This year I was able to drag the whole Urban family out to see the event, though most of them stayed inside Market House Cafe to eat dinner and watch from the warmth of their table seats. Urban Girl, ever my right-hand partner, braved the cold with me and stood along side as I shot the photographs yelling what passed for encouragement at the participants. I hope she didn’t cause any wrecks.

As with every year, there was a range of vehicles, from bicycles made for two to unicycles, recumbent bikes and large, adult-sized tricycles. Pulling carts filled with either young children or animals of various sorts seemed to be a more common practice than ever.

Snoopy made an appearance and there were numerous Santas and more than one Grinch. Rudolph was accounted for in several versions as were snowmen and bunnies. Yes, you read that correctly: bunnies were a thing this year. And not just a couple of bunnies. There were entire packs (herds? gaggles?) of bunnies who coordinated their appearance and then simply random bunnies. Maybe the Christmas Bunny will become a new mash-up tradition. Of course, there were elves and many Christmas trees, lots of lights and just general colorfulness for the sake of the fun of the event.

One side story I heard the next day came from a friend who has been coming downtown regularly for sixty years or more. He relayed that he and his wife become very impatient when they hear friends complain about inadequate downtown parking. He and his wife arrived downtown sometime around the beginning of the festivities – which certainly weren’t the only thing bringing people downtown on a Friday night – and found that the State, Promenade, Locust Street, Walnut Street and Market Square Garages were all full. He said he understood now how those friends – who probably come downtown at the height of events – feel about attempting to park in the city.

That led to another realization I hadn’t had in previous years: Many of the participants drive downtown and unload their bikes. I naively had assumed people rode their bikes into the city for the event. I’m not saying that’s a bad thing, just that it’s an interesting thing. It would not be practical for people far from downtown to ride in. I’d just never thought about it.

As always, it’s a fun event and each year it continues to demonstrate – even on a pretty cold night – that Knoxville is increasingly serious about cycling. And, as the pictures show here, they have a lot of fun being serious about it. This is a small fraction of my photographs and, as I typically do, I’ll post the complete collection on the Inside of Knoxville FB page sometime later today or tomorrow.