Local Christmas Music for Your Stocking

As always, Knoxville enjoys an embarrassment of riches in the musical arena. This Christmas season has given us at least three new disks featuring local artists. You can’t go wrong with any of the three, so head out to disk exchange and pick them up!﻿

The first is by Christabel and the Jons. After much thought and consideration she decided to call her new Christmas album . . . “The Christmas Album.” No room for confusion there. This is the one of the three that I haven’t heard. It was sold out at Disc Exchange when I inquired. According to the person I spoke to there and a review I read it’s about what you would expect: gently swinging renditions of old favorites along with a couple of quirky numbers such as John Prine’s “Christmas in Prison.” It isn’t yet available on itunes or Amazon, but you can get it here or of course, you can get it at Disc Exchange – they told me they would have copies starting Tuesday of Christmas week. 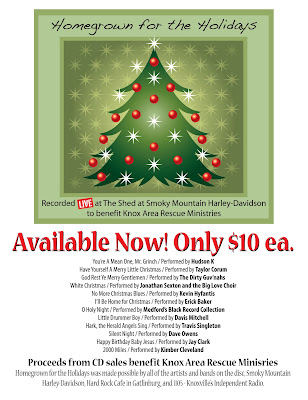 Also available is a new disc by a collection of local artists including the Dirty Guv’nahs, Jonathan Sexton and the Big Love Choir and Jay Clark among others, called “Homegrown for the Holidays.” Mostly filled with traditional tunes, my favorites are “God Rest Ye Merry Gentlemen” by the Dirty Guv’nahs and “Happy Birthday Jesus” by Jay Clark. While not all the music is superb, what makes this disc a must-buy is the fact the money raised from the sales of the album go to the Knoxville Area Rescue Mission. So you get some good music and a good feeling from supporting a good cause. 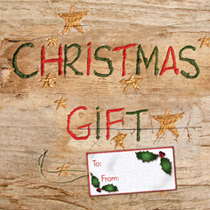 Finally, the new CD by Scott Miller is my favorite of the batch. It’s called “Christmas Gift” and the only flaw it has is that it is too short, coming in at only seven songs. It has a connection to Christabel’s album in its inclusion of “Christmas in Prison.” Overall it has a reverent feel without relying too much on traditional songs. It’s nice to hear Roger Miller’s “Old Toy Trains” and Neil Young’s “Star of Bethlehem on the same CD. I only wish he had done a full-length album. I wouldn’t mind seeing an expanded version of this one next year. It is available on itunes and at Disc Exchange.

So how about enjoying a bit of seasonal cheer while supporting the local folks?