Parades Return to Knoxville with a Salute to Veterans 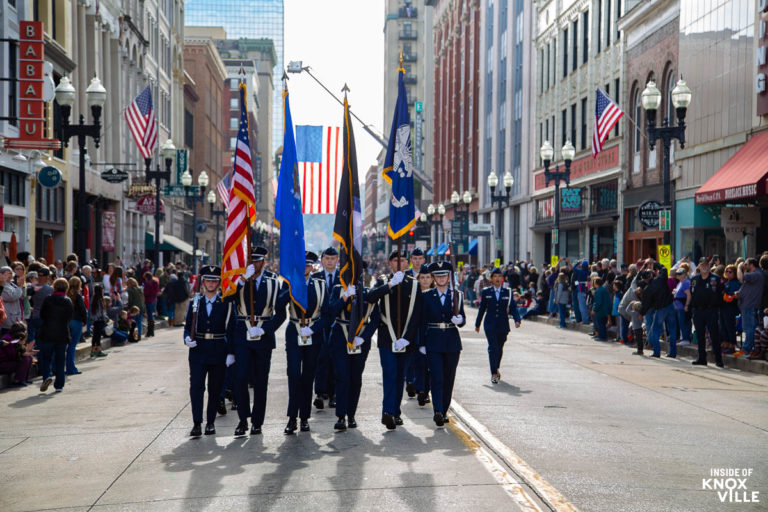 In 2019, when the annual Christmas parade wound through downtown, it would have been difficult for us to comprehend that there would be no more parades in this parade-happy city for nearly two years. Yet, here we are, 23 months later, seeing our first parade since that one. I wondered what to expect: Would people turn out in numbers similar to past Veterans Day parades? Would there be as many participants? Would we wear masks? Are we crazy?

That final question will have to be put on hold until we see what transpires with the COVID-19 virus in coming weeks. As for the other questions: Yes, the crowds will return. Yes, there would be as many participants. And mostly, no, we did not wear masks. For an outside event, perhaps it was unnecessary, though people were packed tightly together on sidewalks. I was happy to attend with my friends Sandra and David, who live in Florida. David is an Army veteran.

The grandstand was located on Gay at the intersection with Wall Avenue. On the grandstand were various city and local military dignitaries, including Knoxville Mayor Kincannon and most of city council. Representative Burchett was nearby, as was Mayor Jacobs. County Commissioner Larsen Jay was in the parade, as was state senator Becky Duncan Massey.

In a first, a group of new service men and women were sworn in as part of the proceedings. Taps was played and a Blackhawk helicopter crossed and re-crossed the skies above Gay Street. The event was emceed by Gunner from WIVK. Each of the many groups supporting veterans were announced as they approached the grandstand. The weather was approximately perfect for an early November.

The parade was long, though not quite as long as I remember in the past – though my memory may fail me. I think it clocked in at just about an hour-and-a-half. 93-year-old Sergeant Everett Prough, Korean War Veteran served as the Grand Marshall.

As is often the case when I photograph this parade, several things caught my attention. One was the massive disparity in bands. Bands from Bearden and Farragut high schools were huge and decked out. They could easily pass for small college bands. They were superb, and the training and support they get will propel some of them to college scholarships in band. Bands from other schools in lower-income parts of town were tiny and less opulently appointed.

I also noticed, for the first time, several groups dedicated to young people’s interest in the military. I’m not talking about ROTC or middle or high school children. These were elementary children in fatigues, like the North Knoxville Young Marines. I simply didn’t know these organizations existed.

I also heard the first boos I’ve ever noticed at a Veterans Day Parade. The boos came when Gunner announced the Democratic Party of Knoxville. After cheers — often raucous and loud — for every other group there to support veterans, it was surprising.

For the most part, it was a great parade, with lots of support shown for veterans, who certainly deserve thanks from us all. Beyond the fact that it was for veterans, it felt good to be out in the streets for a major event. I think we’ve missed our parades and festivals and the way they measure the passing of each year. It was good to have it back.

Here’s a gallery will all 11 p0hotographs I kept from the event. Click them to see the larger version.