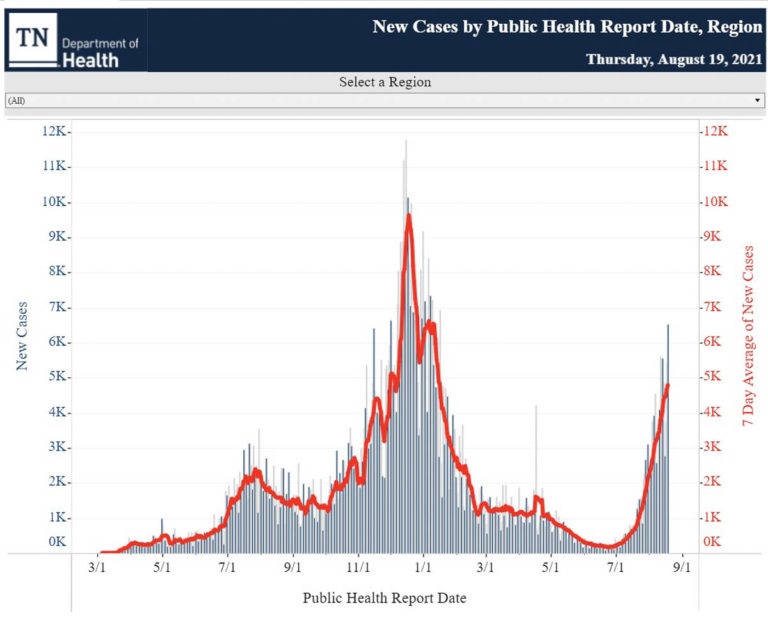 Welcome to the third installment after my resumption of COVID-19 reports. I would love to say there is some promise in the numbers this week, but encouragement is hard to find. Our best hope for the current wave would be that it simply, suddenly, and sharply declines as it did in January. And we can hope that by the next round we have enough vaccinations taken to blunt its capacity to hospitalize and kill as many people.

National statistics are impacted starting this week because Florida’s reporting of COVID deaths no longer complies to national reporting standards. The result is that national death rates, while not good as reported, are probably worse. The local statistics will be a bit strange this week, as well, due to the fact that the Knox County Health Department switched from reporting only on Wednesday to reporting on Tuesday’s and Thursdays. The local information, therefore, will be based on eight days this week, from a week ago Wednesday (which I used last week) to yesterday, an eight day period. Going forward, the Thursday report will be used, giving us a cleaner seven-day period to compare each week.

About 211,100,000 cases of COVID-19 have been confirmed in the world, including about 17,700,000 active cases. In the last seven days about 4.6 million new cases were confirmed, up from just over 4.5 million last week, for an increase of about 1%. 67,512 deaths from the virus were reported this week, a reduction of about .9% from the previous week. Over 4.4 million people have died of the illness.

The world is averaging about 653,000 new cases each day, up from 644,000 per day the previous week. On average, 9,644 people are dying from the illness each day, up from 9,575 a week ago. More than 4.88 billion doses of the vaccine have been given internationally, up about 300 million from last week. Significant portions of the world have yet to see an extensive vaccination program.

Cases in the U.S. increased by about 10% this week, slowing from the 23% increase last week and offering hope that this surge might be slowing. Deaths, however, which naturally lag cases, increased by 19%, a slight escalation from 15% the week before. Daily new cases are now averaging 140,499, up from just under 126,000 cases per day last week. The rate is similar to the first days of February earlier this year. One year ago at this time, the U.S. was averaging about 49,000 new cases per day. The number of new cases last Friday, 163,177, was the highest single-day total since January 29 (168,092).

The death rate in the U.S. continues to rise, though more slowly than cases, and appears likely to peak at a lower level than last winter. 769 Americans died, on average, each day over the last week. This compares to 537 per day the previous week. The current pace of deaths is similar to early April, even though our current case rate is roughly twice that of early April.

The same five states, in slightly shuffled order, have the highest rates of per capita increase in the country as last week: Mississippi, Louisiana, Florida, Arkansas and Alabama. For full vaccination rates in the U.S., these states rank 49th, 46th, 21st, 45th, and 50th. The five states with the lowest per capita infection rates this week are Maine, Michigan, Maryland, Connecticut, and New Hampshire. Their full vaccination rates rank 3rd, 25th, 6th, 4th, and 8th.

The state of Tennessee has reported 969,998 cases of COVID-19 and 13,096 deaths from the virus. New cases are averaging 4,774 per day, up from 3,808 a week ago. Tennessee currently has the 9th worst rate of spread in the country, and it has risen 78% in the last two weeks. The current rate of new cases per day is similar to that in mid January and is more than twice the peak rate from last summer.

Yesterday’s report of 6,351 new cases is the highest single-day report since January 17 (6,922). The most recent reported positive test rate for the state was 17.77%, or more than three times the rate that indicates an adequate amount of testing is being performed.

After averaging as low as two deaths per day earlier this summer and 16 per day a week ago, the state is now averaging 26 deaths per day. Yesterday, the state reported 51 new COVID-19 deaths, the highest single-day total since February 27 (56).

The rate of new hospitalizations from the virus continues to escalate rapidly and shows no signs of slowing. 2,572 COVID-positive patients are currently hospitalized in the state, up from 2,078 a week ago. 767 are in ICUs, up from 604 a week ago, and 474 are on ventilators, which has nearly doubled in just one week, up from 240 last Friday. Note that figures are often increased retroactively. ICUs are at 93% capacity in the state.

Pediatric hospitalizations have dropped from 50 a week ago to 48, though they peaked at 63 during the period. Twelve children are in ICUs and six are on ventilators.

The state does not display historical data for hospitalizations further back than three months, but based on my own reports for comparison, our current rate of hospitalizations is similar to late January. We peaked at 3300+ in the hospital in early January. On January 18, we had 2,699 hospitalized. Interestingly, the ICU (720) and ventilator (403) numbers were significantly lower at that time.

That seems concerning because we know that many more hospitalized in January were among the most vulnerable populations, so it begs the question of why would a larger percentage have severe illness now? We know that the vast majority (nearly 90%) are unvaccinated and that they have the Delta variant. Given that they are, on average, younger, it suggests the Delta variant may be producing more severe illness, though the last I’ve seen that has not been conclusively proven.

Tennessee’s vaccination rates continue to improve and the rate continues to increase. 47.6% have had at least one shot, up from 46.4% a week ago. 40.7% are fully vaccinated, up from 39.5% a week ago. The state ranks 43rd in first vaccinations and 42nd in full vaccinations, identical to last week’s ranking. 118,500 vaccinations were given in the state over the last week, compared to 100,300 last week and 90,000 the week before, so the pace is increasing. Unfortunately, the pace is hitting just over 1% a week and at that rate would take more than six months to cross about 70%.

In other Tennessee news:

Over the last eight days, the Knox County Health Department has reported 1,725 new cases of COVID-19 in the county. The average of 216 new cases per day is up from a daily average of 126 new cases per day last week. Additionally, 564 probable cases (351 last week) were reported in the period, or about 70 per day, for a total of 286 confirmed or probable cases in Knox County each day for the last eight days.

The number of confirmed new cases has topped 100 for nine consecutive days. The last time that occurred was late-November through mid-January when the county recorded 55 consecutive days over that mark. Last Friday’s 261 new cases was the most reported for a single day since 274 reported on January 18.

In the 19-hospital regional area, 439 COVID-positive patients are currently hospitalized, up from 333 a week ago and 233 the week prior. 127 are currently in ICUs and 69 are on ventilators. Last week 96 were in ICUs and 46 were on ventilators. About 88% of area hospital patients are not vaccinated. Most of the others, are immunocompromised, according to Tennessee Health Commissioner, Dr. Lisa Piercy.

After recording six COVID-19 deaths last week, the most since April, the KCHD reported ten in the last eight days. The deaths continue to be more evenly distributed over several age groups and not just focused on the elderly. Deaths reported in the last eight days include four people between the ages of 45-64, two people between the ages of 65-74, and four people age 75 and up. Deaths from the virus in the county now total 674.

Knox County continues to lead the state average for vaccinations and is one of the most vaccinated counties in the state. The trend for increased vaccinations also holds true locally. 9,377 shots were given in the county over the last eight days, compared to 7,200 given in the previous week. 52.53% of Knox County residents have at least one shot, up from 51.47% last week, and 225,588 (48%) are fully vaccinated, up from 47.2%. Clearly, the pace needs to increase significantly to ward off further waves of the illness.

The University of Tennessee is only reporting case totals once each week, on Monday. As of Monday, prior to the beginning of classes, 20 staff members and 24 students were reported to currently test positive for COVID-19.

In other area news: