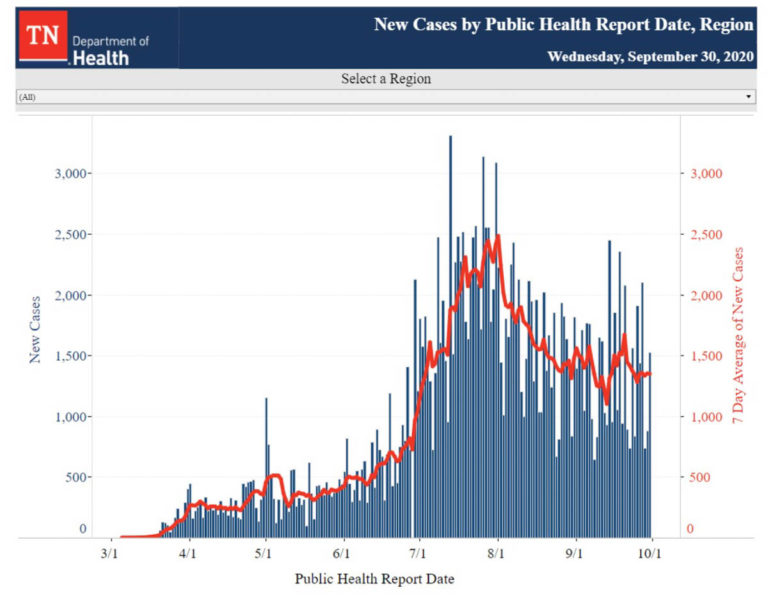 Good Thursday afternoon. I hope you checked out the beautiful moon last night and the gorgeous sunrise over the city. It’s October, the air is crisp and there is much to celebrate if we take a moment to find it. I’m celebrating a two hour Board of Health meeting last night after the eight hour Knox County Commission meeting on Monday night. Do long meetings make anyone happier? Other than when they end, I mean. Not even asking for a friend.

The State of Tennessee reported an additional 1,528 cases of COVID-19 yesterday, bringing the pandemic totals to 188,505 confirmed cases and 7,634 probable cases. 9,173 people are currently ill in the state and 179,332 are inactive. An additional 34 deaths were reported, bringing that total to 2,454.

61 people were hospitalized yesterday, bringing the pandemic total of COVID-positive Tennesseans hospitalized at some point to 8,733. 846 people are currently hospitalized, a number that has increased steadily over the last week after a long decline. The number is now back to the levels last seen around September 9. Of the 846 people, 284 are currently in the ICU and 129 are on ventilators. These numbers have also risen after lengthy declines.

Today’s local report has to start with a note about active and inactive cases. The Health Department stated at last night’s Board of Health meeting that the numbers of active an inactive cases would be shifting today to be more consistent with state numbers. I did not understand the explanation completely and based on what I did understand, I expected a much less dramatic shift than has actually happened.

Long term, careful readers will remember there was a shift at the beginning of last month. That shift was due to a reduction in the length of time, from three weeks to two weeks, a person with the virus is considered active. That was straightforward enough and resulted in a large reduction in active cases – from 2,407 active cases on September 4 to 1,573 the next day.

Unfortunately, it meant there was no way to make meaningful comparisons between numbers before and after that shift. This shift is similar in proportion and also renders historical comparisons impossible. By the time you read this, I hope there will be some helpful explanation of the nature of the shift.

The Knox County Health Department is reporting 75 new cases today, bringing the pandemic total to 9,960. Active cases are listed as 956, down from 1,516 yesterday, for a 37% overnight drop. Inactive cases increased overnight by over 7%, from 8714 to 9355. There are an additional 435 probable cases.

35 COVID-positive Knox County residents are currently hospitalized, with the pandemic total at 374. No additional deaths were reported today, leaving that total at 84. The seven-day average for positive test results is 6.08%.

Charity Menefee began by thanking the clinical team who are giving flu shots throughout the community. As a real life example of doing normal activities safely, she discussed corn mazes and pumpkin patches. She said they are good for social distancing, but wearing masks in case you get closer is a good idea and reminded everyone to wash their hands.

She discussed the drop in active cases. She stressed that the daily case numbers and total case numbers have not changed. She called the shift “moderate.” She said they were pulling from the state’s geocoded data, based on permanent mailing addresses. It leaves out people who are living here, but having permanent addresses elsewhere. That left it unclear to me how the number of active cases could drop by several hundred.

The University is reporting 88 active cases, which includes 84 students and 4 employees. Dramatically down from a few weeks ago, the number is up 13 from yesterday and has increased each of the last two days. 1,427 students and staff have recovered. 13 new cases were reported yesterday (this won’t always match the increase in active cases, as the two numbers are related, but different).

There are currently 314 students and staff in isolation or quarantine. The number has increased each of the last two days, but remains far below the 2,000+ reported in previous weeks. There are no new clusters reported

As of yesterday afternoon, the Knox County Schools reported 65 active cases, including 42 students and 23 staff. This reflects an increase of four since yesterday and an increase of seven since the same day last week. 273 have recovered.

There are currently 1,035 in isolation or quarantine, including 912 students and 123 staff. The 1,035 reflects an increase of 33 from the day before, but a decrease of 60 since the same day a week earlier.

The system continues to struggle with inadequate maintenance staff and substitutes, as both metrics remain red. Halls High School and Vine Middle School each remain closed to in-person learning due to the virus.