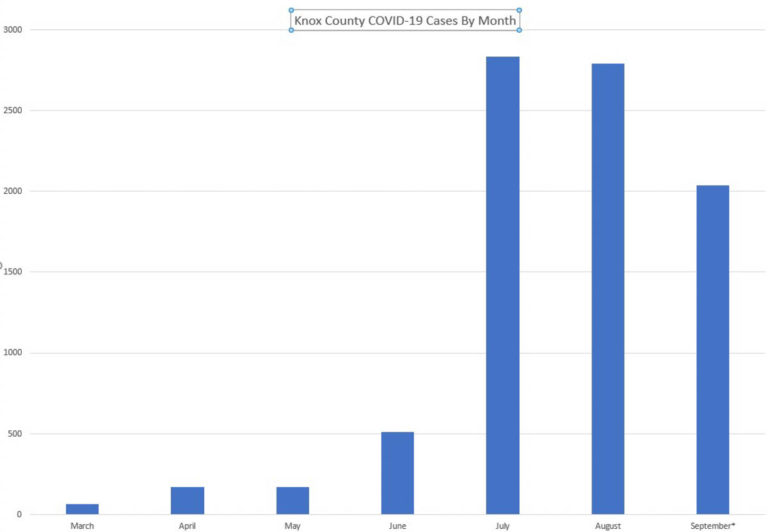 A while back, several readers suggested that enough time had passed that monthly charts might be more helpful in order to visualize where we were in our progress of fighting COVID-19, both at the state and local level. It gives us a chance to widen the lens from the every day numbers and see a graphic representation of where we’ve been and where we seem to be heading.

I last showed these charts at the end of July. Having missed the end of August (It’s hard to find a place and the time to update and insert them), I decided to run them on their own today and to include the half-month of September to see what might present itself in a graphic look at the progress of the disease.

Ignoring fluctuations in testing, and assuming everything else is equal, the state of Tennessee is improving regarding new cases. July was a disaster, dwarfing everything that came before it. Some local governments responded with mandates of various sorts, wearing masks became more common and August was better.

Clearly, August still dwarfs every month except July, but it was a move in the right direction. To this point, September looks to be an improvement over August, though still much larger than the early months. On the whole, the state case chart is encouraging.

The state death chart surprised me. I knew that cases were dropping and I knew that deaths had risen recently, but I didn’t appreciate the size of the disconnect between the two. While cases dropped about 22% from July to August, deaths actually rose by 52%! This is the precise opposite of what has happened around the world, with new case numbers setting records while deaths fall. In the U.S., both cases and deaths are falling.

Why is the Tennessee death rate getting worse? Projecting forward, given current numbers, the projection would be for another fall in cases for the state, while the number of deaths remain virtually unchanged, meaning the death rate increases, again. This is definitely cause for concern at the state level.

Taking it down to a local level, an examination of the rate of case increases is not encouraging. While cases have fallen precipitously across the country and in the state, Knox County is not improving and, if anything looks to get worse. After having very few cases for months – so much so that it seemed odd – July showed us we did not have some sort of special immunity, with cases soaring nearly 500% over the previous month.

In early August, it appeared we might have turned a corner, only to see cases increase in late August, leaving the total virtually the same as July. The biggest concern at this time is that September looks poised to obliterate the previous months. Unless the rate slows, we will have over 4,000 cases in September. We are looking at a 40% to 50% increase over our two worst months.

Deaths in Knox County were even stranger than cases for a long stretch. While deaths soared in areas of the world and country, we had five in the first two months tracked and an incredible zero for the next two months. This is when the illness got the most vocal local ridicule, as it was compared to other low-number causes of death.

July was a bit of a wake-up call, with deaths shooting up to 34. It may be considered a small relative number, but it was roughly seven times the total of the previous four months. August was better, as we seemed to follow trends elsewhere, with a dropping death rate, though it still dwarfed the early months. September appears to be moving toward almost precisely matching the month of August.

So, what to make of all of this? It’s pretty clear that the state and the county really first felt significant impact from the illness in July. While the state seems to making strides reducing cases, it is struggling to reduce deaths. The county is somewhat a reverse of the state, with cases exploding, but deaths, so far, leveled off or falling.