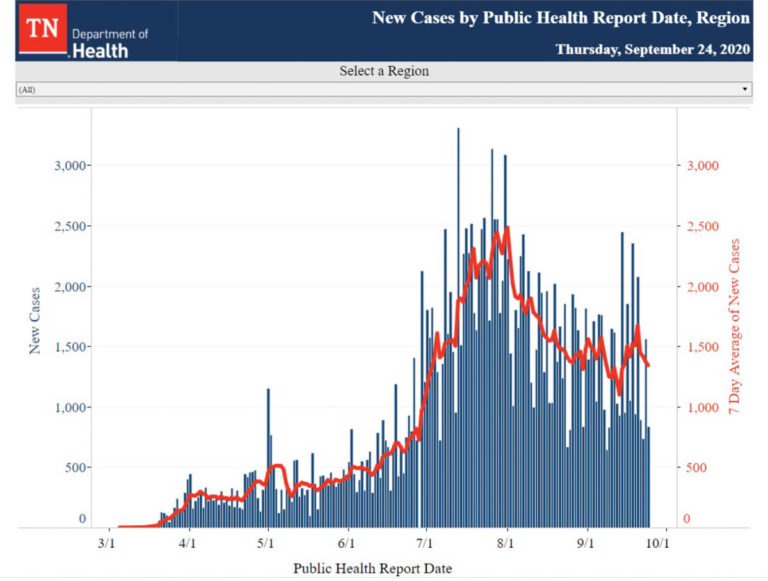 Happy Friday. I realized the week was wearing me down yesterday morning when I stumbled into the kitchen at 6:30 am to find 5-year-old Urban Boy ready for the day. He said something in rapid order that sounded to me like, “Blah, Blah, Blah, Blah, Blah, Blah, Mergenpoop!” (No idea.) To which I replied, “Mojo (that’s what he calls me) needs a cough of cupee first.” I knew at that moment I had passed some sort of redline between functioning and not. Take care of yourselves out there. I think I will watch football and sleep. And cough a little cupee.

Yesterday, the state of Tennessee reported 835 additional Tennesseans had become ill with COVID-19 and another 35 had died of the illness. This brings the pandemic total of confirmed cases to 180,793 in the state and 2,310 deaths. There are an additional 6,751 probable cases. The seven-day average for cases in the state is 1,343 per day and 21 deaths per day.

There were 75 new hospitalizations of COVID-positive Tennesseans, yesterday, but the total hospitalized dropped for the second consecutive day to 692. If I’m doing my math properly (assuming all who died were hospitalized), 75 people entered the hospital, 122 were discharged and 35 died. COVID-positive patients (692), ICU patients (220) and Ventilated patients (112) are all at two month lows.

Testing continues at a low level, with occasional bursts upward. 15,920 tests were reported today with a 5.87% positive test result. While the lower testing is a concern to many professionals, the positivity rate is better than we’ve previously seen. Johns Hopkins University has our positive test result average for the last seven days at 5.7%.

Today, the Knox County Health Department is reporting 83 new cases, making four consecutive days the number has been below 100. The active case count is now 1,633, a tie for the lowest it has been since the new method of calculating began on September 5th. 8,182 cases are now considered inactive.

Hospitalizations have increased this week and there are currently 39 COVID-positive Knox County residents in the hospital, the highest that number has been since September 12. It brings the total hospitalized since the beginning of the pandemic to 357. An additional death was reported in the 75+ age group bringing total deaths to 78.

Of the deaths, 36 people were 75 or older and 42 were below age 75, continuing a near even divide between the two. The local mortality rate reported by the health department for those over 75 is over 10%. For those in the next oldest range (65-74) the mortality rate is just below 4%. For other age groups it is below 1%. The number of deaths are balanced between the two groups because the overwhelming number of cases (79%)  have been among those below 75.

In other local news, business owners issued a statement of support for the Board of Health, asking County Commission to allow them to continue to operate as they have done to this point. (Article, including statement, here.).

The University has begun reporting new cases by day and today report 15. They have provided historic data, as well, and it shows new cases peaked at 102 on September 2. Looking at the Knox County stats for that day shows 104 new cases reported for the county, so I think we may assume that UT reporting and Knox County reporting are not on the same time line. No new clusters have been identified.

Dr. Plowman gave the live update, including the numbers above. She discussed the restrictions placed on students two weeks ago, at the new testing program and the pending move of isolation into Massey Hall. She introduced the new graph that indicates daily cases and said they are dependent on student report on self-isolation forms.

Dr. Gregg said he was pleased to see the numbers go down, but that he continues to have concerns regarding student testing. The number being tested at the Student Health Services continues to be much lower. He said the upcoming testing will help determine if the lower numbers are real.

White and Hess Halls were tested this week with pooled saliva testing. It was required and when the results are returned, they will get a better picture of how many infections there are. Follow up nasal testing and isolations will follow as needed. The goal is to identify and isolate those who are infected.

Dr. Plowman said when the restrictions were put in place two weeks ago, she said she would reduce them when numbers dropped and since they have, T. Rex (workout spot) will reopen and indoor events will resume with social distancing and masks required. Numbers will be limited to 25 people per 900 square feet. Restrictions on visitors to residence halls and Greek houses will continue. Study spaces will be opened, but limited.

She addressed concerns about complaints and violations, particularly in the library. As an important spot for both students and faculty, it needs to be kept safe for everyone. Furniture had been placed for social distancing this summer, but now students are moving the furniture and ignoring capacity limits. Compliance with wearing masks is dropping consistently. It will now be enforced.

Knox County numbers, at a very low number to start the week, have taken another jump over the last few days. As of late yesterday afternoon, the system reported 66 active cases, including 50 students and 16 staff. As of last Friday (and reported here on Monday), the total number was 32, meaning active cases more than doubled in six days (Friday afternoon to Thursday afternoon). Whether the change represents a trend or a brief aberration will be worth watching.

1,091 are in isolation or quarantine, including 990 students and 101 staff. As of last Friday, this number was reported at 863, or about a 26% increase in six days. According to their metrics, student and staff attendance, and cafeteria and bus services remain in an good place, while custodial service is a concern and substitute availability is a problem.