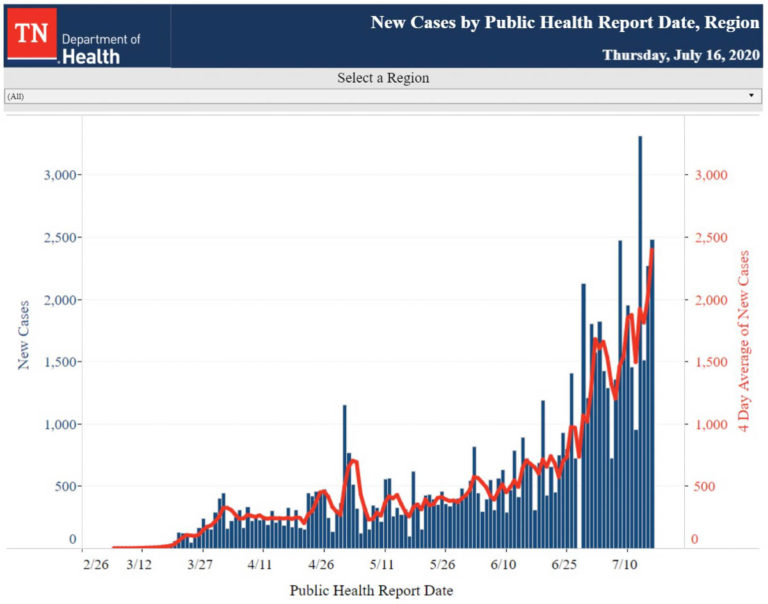 It’s Friday! I hope you make that mean something good in your world. I have realized that I have no concept of how many people are working a regular work week at this point, or how many are going to a place of business to do so. Has your world returned to a sort-of-normal flow? Are you still pretty much sheltering-in-place? Whatever your situation, please find some joy this weekend. It’s important that we have some break in our routine. Take a walk you haven’t taken. Make a picnic. Go for a ride. Some healthy distraction is a good thing.

The 248,869 cases added yesterday represent a new high for daily cases since the beginning of the pandemic. In the first 16 days of July, 13 of the daily totals would have been a record prior to this month. The seven-day average continues to soar, going up about 3,500 just from yesterday to today. The daily average for new cases is currently 221,948.

Twenty-five countries reported more than 1,000 new cases. Nine of the countries are in south and central America. Spain has re-entered the top group, though in the lower reaches of the group, and is the lone European country in the list. Israel continues to rise after seeming to have gotten control of the spread of the virus. India, Colombia, Argentina and the Philippines stand out for the rate of their increases.

The 5,742 deaths yesterday brings the seven-day moving average of deaths to 5,044, the highest it has been since May 12. The countries leading the world in daily deaths are some of the same that lead in new cases. Yesterday, the top four countries for deaths were Brazil (1,299), the U.S. (963), India (680) and Mexico (579). Global deaths have slowing risen since late May.

Shutdowns are spreading across India for a second time as the country becomes more embroiled with the virus. Boris Johnson has revealed his plan for a “return to normality” by November in the U.K. Chinese companies are offering vaccines prior to approval for some people. 1,000,000 minks in the Netherlands and Spain have been killed as a result of workers and animals testing positive.

Since the beginning of the pandemic the U.S. has reported 3,695,025 cases of COVID-19 and 141,118 deaths from the illness. Yesterday, 73,388 Americans were diagnosed and 963 died from the illness. The number of new cases represents a new high. Prior to July, the most new cases in a single day came on June 30, with 46,075 cases. That number has been exceeded every day in July with the exception of July 5 when 46,036 new cases were reported. Our seven-day moving average moved upward by about 1700 overnight to 67,162. There are roughly 1.9 million active cases in the U.S.

The 963 additional deaths reported yesterday continue a very slow trend of increases in the daily rate. This week marks the first time the U.S. has reported over 900 deaths for a total of three days since early June. The seven-day average of daily deaths, which had dropped as low as 516 on July 5, has now reached 761, similar to where it was on June 15.

Florida Governor DiSantis said the current outbreak there is the fault of the media because they didn’t discuss the virus as much during the protests and people relaxed. This comes after he previously said the media was stirring up hysteria by constantly predicting Florida would have a large outbreak, saying in May, “we’ve succeeded and I think that people just don’t want to recognize it because it challenges their narrative, it challenges their assumption.” This week the state reported four consecutive days with more than 100 deaths.

A second round of stimulus checks is looking more likely, though there are significant divisions over the form an economic package would take. A majority of states are now requiring masks in public, including some states, such as Alabama, which had previously resisted. Georgia is going the opposite direction, with Governor Kemp now suing the city of Atlanta to stop them from mandating masks, even while saying he encourages their usage.

Yesterday, the state of Tennessee reported an additional 2,479 cases of COVID-19 to bring the total number to 71,540 since the beginning of the pandemic. The number of new cases was the second highest reported any day since the beginning of the pandemic, with the highest number having been reported on Monday of this week. The four-day moving average is now at 2,395, the highest it has been at any time. On June 1 the number was 469. On July 1 it was 1,286.

1,393 people were moved to the “recovered” category yesterday and 13 additional people died. The net increase to the state’s active cases for the day was 1,073, bringing the total number of active cases to 29,494. The total deaths now number 796.

Tennessee continues to test at a very high rate, testing about 26,000 people yesterday to bring the testing total to over 1.1 million. Unfortunately, as the graph below demonstrates, the rate of positive tests continues to rise, meaning we are testing behind the curve and we are not containing spread. The positive test result percentage has now risen to 9.2%, the highest it has been since early April, when the testing program was very small by comparison.

Locally, the new case numbers continue to be discouraging. A record 147 Knox County residents were diagnosed positive yesterday, bringing the total since the beginning to 2,053. The new high number exceeds the previous high, set only three days ago, by 25%. The 10 highest days since the beginning of the pandemic have all occurred withing the last 2 1/2 weeks. Prior to July, the daily high was 53, set on June 29. Just three weeks later we have nearly tripled that number.

There are now 1100 active cases in the county, which represents 54% of all the cases from the beginning. 44 people are currently hospitalized and there are no additional deaths, leaving that number at 17. There are 86 probable cases.

In local news, all Knox County Public Libraries are now open. Food City will begin requiring masks starting next Thursday, joining a long list that now includes Walmart. The White House Task Force has recommended that 17 states, including Tennessee, roll back reopenings. Early voting begins today (please wear your mask). Parents of special education students continue to express concern regarding the education of their children under the new KCS plan.

Dr. Buchanan began by thanking the team that tested 400 people yesterday while wearing full PPE in the heat. She said the KCHD is looking for alternative test sites to avoid having people wait in the heat. As a result, there will be no testing on Monday at KCHD.

She confirmed the above numbers, noting it is the largest single-day increase. She says they continue to hear people questioning whether masks will help. She said it requires mass adoption across the community. It will take time before we could see results even if there is wide support. She noted that case results today reflected tests from a week ago and pleaded with everyone who is tested, to act as if they are positive until they know otherwise.

Wearing a mask is one thing that we all can do that changes the direction of the case load and will allow businesses to reopen and the economy to move forward.