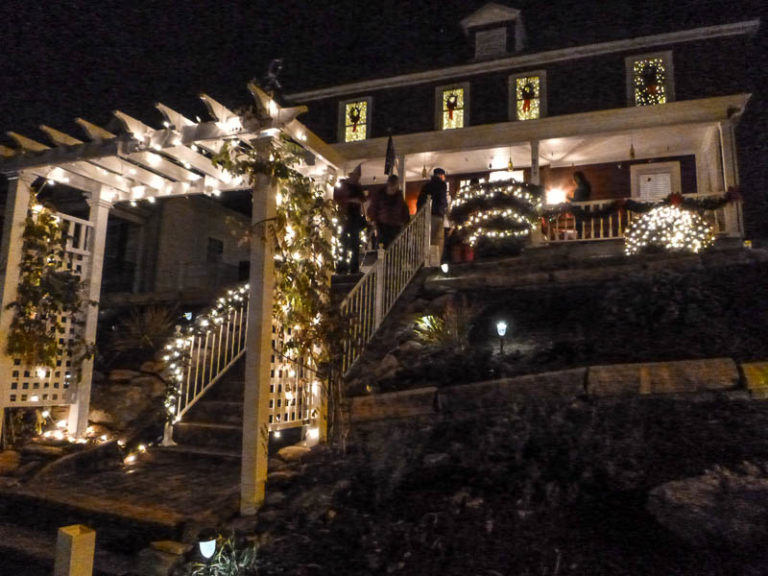 Downside of the Candlelight Tour: very dark outside. To see the houses in daylight, visit the tour’s website here.

Article and Photographs by Megan Venable

Sandwiched between Christmas Tea at Colonial Heights and the Christmas Lantern Express train ride the following day was my visit to the Old North Knoxville’s Victorian Holiday Home Tour. As I mentioned previously, I was scheduled to attend with my beloved, along with three other couples from our congregation at St. John’s Lutheran Church in downtown Knoxville, and was happy to include a formal documentation of the tour highlights. Our party consisted of the Hamsteads, the Lees, the Lowe-Zinsers, and the Venable-Smiths.

We started our evening with dinner and Christmas cheer at Central Flats and Taps in Happy Holler. Many flats and glasses of taps were consumed. So much so that I was worried I’d have to bump my home tour from Saturday evening’s Candlelight Tour to a Sunday afternoon tryst, but soon the group rallied, and we were off on our walk. Although bus service is provided in a loop to each stop, we chose to walk the route out of tour order.

We started at the Rutherford House (above), a short walk from Central Flats and Taps, which is set up on a hill on Anderson Street. Downside of the Candlelight Tour: very dark outside. To see the houses in daylight, visit the tour’s website here. But the inside was warm and all gussied up for Christmas!

From the tour guide: “From the street, you may notice that the house is exactly symmetrical. While this may appear to be simply a classical design feature, it is, in actuality, a remnant of the fact that the entire structure was originally a pair of mirrored townhouses, split down the middle.” And “the duplex changed hands many times from 1914 to 2006, even spending some time divided into four apartments. Renovations in 2006 converted the structure to a single family home as it is today.”

It was gorgeous, and the transition was well done, because I didn’t notice any “seams” of any sort, and the home flowed beautifully from room to room. And, instead of architecture, what caught my eye was:

Off to house #2, which was #3 on the tour route – Angelius-Arsenault House on Oklahoma Avenue.

“Numerous examples of beveled leaded glass appear throughout the house, and interior woodwork and trim details show the finely wrought design from over a century ago.”

And of course, my attention was drawn to: This pachinko game. I shared a story and a laugh with homeowner about the pronunciation of the word. When visiting Japan as a chaperone of four high school students, my father was informed by the Japanese contact very awkwardly that the way the students were pronouncing “paaaaachiiiiinnnnkooooo” didn’t mean “Japanese pinball,” but instead it meant “male anatomy bit.” Evidently, the young women thought the word sounded funny and were repeatedly saying it loudly in public. Whoops. Tee hee.

Moving on! Stop 3 was absolutely sumptuous, and I have already informed the homeowner I’m coming back over and we are dressing up and re-enacting scenes from Downton Abbey.

And, I loved the most seeing that, in fact, real people do reside in these incredible homes:

There were no restroom facilities available for tour guests, so at this point we lost the Hamsteads and my beloved Smith. They scampered back to Central Flats and Taps to use the facilities “for just a minute” but after 30 minutes the rest of us got a group text that the taps were cold and the football hot and to meet them there at the conclusion of the tour.

I was surprised to see what I originally thought was yet another pachinko game, but was informed that it was a bumper ball game.

And let’s hope the Bentley’s are on the nice list, because guess who paid them a little visit?

From the guide: “This late Victorian home has been fully restored in the last 12 years, including a new entryway and detailed exterior restoration. In extreme disrepair, a nearby neighbor purchased the home in 2004 and began an intensive restoration that even included foundation work under the original kitchen. In 2005, the home was sold as a project to an out of town owner, who finished the restoration and sold it to its current owners in 2015.”

Stop five was the Guilford house on Armstrong Avenue.

The homeowner is a quilter, and I loved seeing all of her pieces throughout the home.

And everyone I heard who walked through the kitchen all exclaimed as they came into the door:

The next stop was neither historic nor a home, but after initial confusion, we were happy to learn that this stop was the new home of Vineyard Church Knoxville, our comfort stop for bathrooms and refreshments.

Stop 7 – and we’re going at a clip now, because the tour was to close promptly at 9 PM, and we’re down to our last fifteen minutes – Sparer-Shuck House on West Glenwood Avenue.

But I was drawn to this piece in the kitchen: It’s from an old post office and used to sort the mail! The homeowner said she had the wall built to this size just for it to sit here. Originally, she and her husband used it to store CDs – perfect size for that use! I asked, and yes, it’s a pain in the butt to dust.

Lastly, as we wound down our tour, our stop 8:

At this point, between the Christmas Parade the night before and the Home Tour that evening, my camera battery died. I luckily had stashed a spare camera just in case:

We were down to our last two minutes, so we dashed through quickly so the homeowners could get some rest.

From the guide: “This one story frame house has a wood shingle wall covering, in contrast to the wood lap siding of many of the neighboring houses. The home still has its original double hung three over one windows and a leaded glass entry way featuring lattice patterned sidelights and transom.”

We wrapped up the evening by walking back to Central Flats and Taps and reuniting our party. The only stop we didn’t make on the  tour was to the Time Warp Tea Room, but as that is a public coffee house, most of us had already been through it.

Wonderful night with friends touring those beautiful homes! I will most certainly be on the tour again next year, as different homes are on the tour each year. I heartily recommend you make this part of your holiday celebration next year!