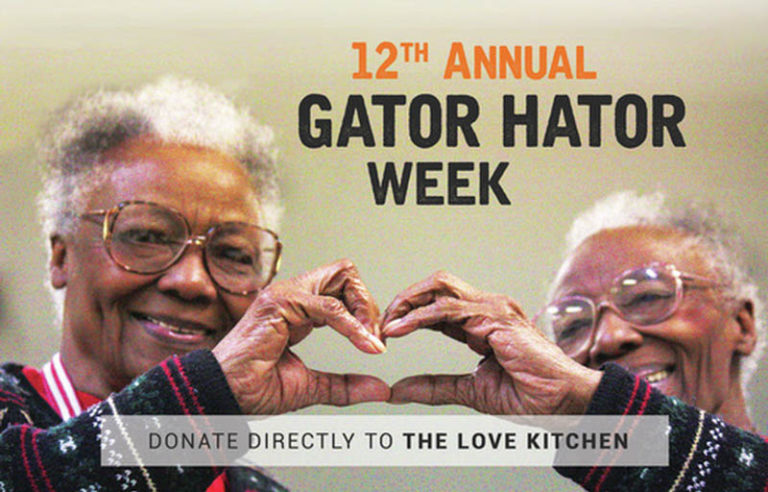 Ah, that time of the year. UT football is in full swing. After a close run-in with a surprisingly strong Appalachian State, UT rebounded to crush Virginia Tech. One softer opponent and then the game that tends to define the early season each year: Florida. Since moving to a two-division system in 1992 the annual competition between the two teams has, more often than not, served as an elimination game for the eastern division championship. Thus, the rivalry heated up considerably, which inspired a guy named Jimmy Buckner to start Gator Hator Week. The idea being that the passion inspired by the rivalry might be marshaled to accomplish something very simple and very good: to feed hungry people. Subsequently he formed the  501(c)(3) called the Scarecrow Foundation, to pursue these same goals year-round.

An incredible irony underlying the entire enterprise is that Jimmy Buckner is a University of Florida alumni with deep family roots supporting the athletic program there. I’ll be honest: When I learned that a gator was behind Gator Hator Week, I was shocked. Jimmy laughed and pointed out a couple of things: It’s “Hator,” with an “o,” so clearly, it’s all in fun and second, it’s about feeding hungry people, so in comparison, a little athletic rivalry is trivial.

With the slogan, “Entertainment with Purpose,” the organization has devoted itself to ending hunger by sponsoring and organizing fun activities which raised money for groups already fighting to end hunger. Gator Hator Week, for example, includes a long list of fun events, all of which benefit the Love Kitchen. The Scarecrow Foundation consists of a non-paid Board of Directors and a large group of volunteers. The fees collected from participants at the various events cost money are channeled to the designated hunger organization. 100% of the money. Not a bad percentage compared to any other charity organization you might name.

Jimmy often asks a very simple, yet, haunting question, “Why should anyone in America be hungry?” Pointing out that so many people struggle with the basics, it’s a question that gnawed at him. For years he delivered food via Knoxville’s FISH program and of that time he said, “When you go into people’s homes who are humbled and have to ask for help to eat, it effects you personally.” Noting that Scarecrow helps existing food agencies, he points out, “they need volunteers and money. That’s the core of what we do.”

Of the Love Kitchen, one of their long-term partners, Buckner says, ” The Love Kitchen does such a great job. The legacy of Helen and Ellen is tremendous. They provide 3,000 meals a week. They need help getting volunteers. If you have a little extra time, or a little extra money help them by giving it to the love kitchen.”

The week’s activities offer participants a chance to have fun, to contribute monetarily to the Love Kitchen, but also, and perhaps as importantly, to volunteer to help in their efforts to feed people who are hungry. “We take a lot of pride in supporting The Love Kitchen. We’re going to have a lot of fun, but at the end of the day, it’s about helping end hunger.” Each event will feature an opportunity for participants not only to give money, but to sign up to volunteer.

Of the thirty activities in an eight day period this year, several are in the downtown area. At noon on the 18th, Central Flats and Taps will be the site for the “Fitness Together Gator Hator Hunt.” On Monday, Sapphire hosts “Pocket Aces Happy Hour,” and the same day Downtown Grill and Brewery hosts the Gator Hator Poker Classic. Breakfast events are on tap Wednesday morning (21st) at Pete’s, followed by Thursday morning breakfast at Cafe Four. Later Thursday night Backup Planet plays The Concourse at the International. Finally, in a very cool conclusion to all the activities, a “Game-day Tailgate Party at Club LeConte” starts at 11:00 AM. The event is open to the public, costs only $20 and offers food, drink and game viewing with the best view in the city just outside the window.

It promises to be a lot of fun while both doing some good and reminding us to reserve our hate for something other than sporting teams. Below is a complete listing of the schedule. Go to the site to get tickets, make donations or volunteer.