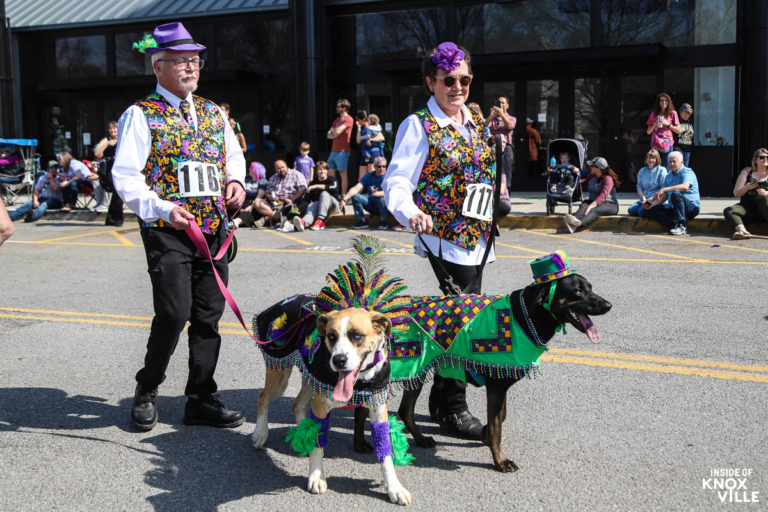 The 15th annual Mardi Growl Pet Parade and Festival were held on Saturday. In keeping with a trend that started during the pandemic and has gained momentum at the urging of the city, the festival was held on the south performance lawn at the World’s Fair Park. The parade itself took a new route this year, moving from the Old City through Jackson and across Broadway onto World’s Fair Park Drive, where it wound its way to the park itself.

Judges included both city Mayor Kincannon and county Mayor Jacobs, as well as others. A grand stand was set up to review the dogs as they passed behind the new Marriott as the Sunsphere towered above. Pets then crossed under the Clinch Avenue viaduct to enter the festival grounds on the south lawn. The event, sponsored by Merchants of Beer and others, benefited Young-Williams Animal Center.

Once on the site, “over sixty vendors” offering up doggie and other items were stationed around the center of the lawn. The center’s Spay Shuttle was onsite if any animals needed a little business done. In addition to spaying, they offered rabies shots for $10, free microchipping, and other vaccines for both cats and dogs. A band played on a stage at the north end. Food trucks and a dining tent were located on the southern end, just beyond the lawn itself. It was a happy event, with lots of yapping, happy dogs and owners.

For their $20 registration fee, goody bags were provided to each participant. The dogs and owners who wished to compete in the judging were given a number and divided into seven different categories including Best Vol Spirit, Best Dawg Pack, Pet/Owner Look-a-like, Best Dog Couple, Most Unique Mixed Breed, Best Costume and Best Naked Dog.

I’ll admit, I’ve been a little skeptical of the move to host festivals on the World’s Fair Park. The original push to have them downtown was led by a need to have people come to downtown and eat and shop while they visited. The last two years have been tough business years and I wondered if we might still need the impact of festivals to be centered on Market Square.

At the same time, as a downtown resident, the festivals can be overwhelming. Just walking about and doing business can become a challenge. With an event centered around animals, stepping on the sidewalks can become a game of hopscotch. Getting in and out of downtown via car can also be a challenge during the events.

I also wondered if people would attend festivals as well as they have in the past if the festivals centered on the World’s Fair Park. There is a long history of events held there, though they were smaller. In the 1980s there was an International Festival our family attended for several years, with food served from all over the world. It probably drew hundreds. Concerts have sporadically done well there and last year’s Asian Festival and Dogwood Arts Festivals worked well in the space.

My perspective changed a bit on Saturday. Not only was the parade route pleasant, the spot worked perfectly for the festival. While it was held there last year, the only parade was around the track and the crowds seemed smaller. By not parading down Gay Street and celebrating for hours on Market Square, the downtown sidewalks remained more clear of droppings. The parade route might have been a bit long for some of the dogs and the crowds lined to see them seemed smaller, but it worked.

As for downtown businesses, while I can’t speak for them, I can say this weekend’s downtown crowds certainly seemed to imply that downtown will do fine without most of the festivals sitting on Market Square. As I walked back from the World’s Fair Park, hundreds of people were going in both directions, to enjoy the festival and to, perhaps, spend time downtown. The distance between the two, which really isn’t that great, didn’t seem to be a major deterrent.

The downtown crowds who came for First Friday the night before must have been the largest since the advent of COVID-19. I watched the State Street Garage (capacity 1,497) have its available spaces drop into the 60s. On Saturday, once I got back to Market Square, patios were full and I heard a couple of people talking about three-hour waits. The Winter Farmers’ Market seemed to be doing great business and I couldn’t imagine how uncomfortable it would have all been with a festival thrown onto the square.

In the end, it was, by all appearances, a great day for the dogs and for Young-Williams, and for humans who enjoyed a day with their dogs, as well as humans who just wanted to enjoy a beautiful day in the city. As you can see, there were lots of festive, cute, and beautiful pups, and not a few cute kiddies along the way. I picked some to show here, but the full run of photos is available in the gallery below.