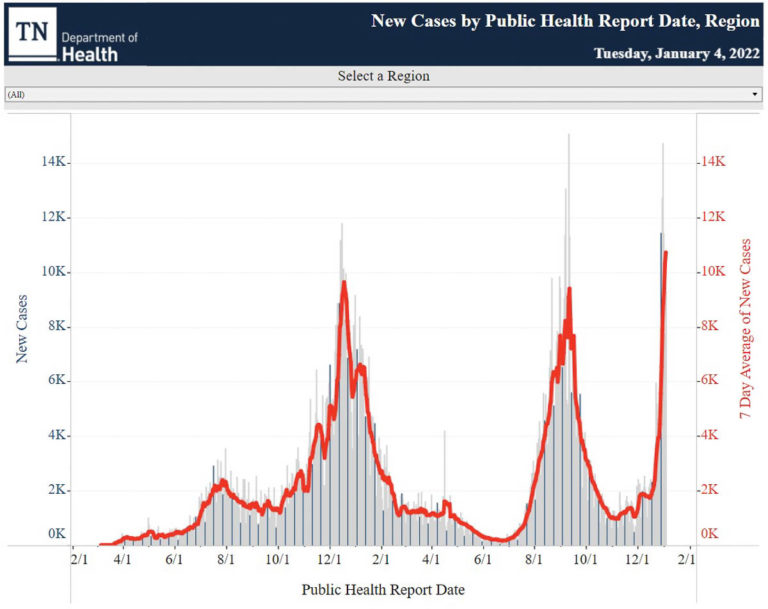 And so, we meet again. What seemed unimaginable in March 2020 when I wrote my first articles about COVID-19, seemed inevitable when I wrote my most recent article at the end of October: The virus continues to impact us into 2022. Our opinions about the virus, vaccines, mandates and more really don’t matter to the virus. It is here and will be dealt with. The last days and weeks have seen global impacts from cancelation of hundreds of flights, down to the very local temporary closure of Yassin’s Falafel House downtown (they are set to reopen on Monday) due possible COVID cases among workers.

Omicron is now the dominant variant in the world, the country, the state, and the county. Much has been made about its relative mildness. It appears to be focused on the upper respiratory system which, for most of us, is less likely to cause severe illness than Delta, which focused on the lower respiratory system. At the same time, it is far more contagious, meaning if a smaller percentage of people become ill enough for hospitalization or die, we could still see more in raw numbers because of the sheer numbers involved. Our exhausted and depleted medical profession may not be able to cope well.

Breakthrough infections are much more common with Omicron but similar to Delta, are much less often severe. Vaccination continues to be the most important mitigation, with hospitalizations and deaths overwhelmingly a phenomenon of the unvaccinated. It impacts us all, however, with closures, loss of income, impacted care for other illnesses, and the risk of future mutations as it continues to circulate.

Our own state is among those that have reduced COVID-19 reporting. Tennessee will only report COVID-19 data once each week and that on Wednesdays. The data will only cover through the previous Saturday. This means that a report on Friday will only capture data that is six days old. It’s hard to make business and personal decisions based on data that is that old. So, bear in mind the “current” rate reported, isn’t. Fortunately, the Knox County Health Department has, so far, continued to provide reports through the weekdays and, for us, that is the most critical information. (UPDATE: The Knox County Health Department will begin the same reporting schedule as the state next week – Data only on Wednesdays and only covering through the previous Saturday.)

The United States is, once again, leading the world in new cases, with an average of just under 611,000 new cases per day. The previous peak surge was about a year ago and topped out at 230,000 new cases per day. In the last fourteen days, reported cases in the U.S. have increased by 227%. Yesterday, the U.S. set a record for cases reported in a single day at 751,512.

The state is reporting an average of 9,409 cases per day over the last week. The average was less than 1,200 per day at the end of October. The current epi-curve provided by the state shows the average has climbed to 10,721. Each of the last surges peaked short of 10,000 cases per day. The 14,727 new cases reported on 12/30/2021 was the second highest single day total since the beginning of the pandemic.

At the end of October (my last report), 1,021 Tennesseans were hospitalized with COVID-19. There are now 2,116, with 510 in the ICU and 267 on ventilators. Since mid-November, hospitalizations in the state have increased about 325%. There are 64 COVID-positive children hospitalized in the state, with 9 in ICUs and five on ventilators. There were 15 COVID-positive pediatric hospital patients at my last report. By late November the number was as low as 5.

Today, the Knox County Health Department reported 1,003 additional confirmed cases of COVID-19, along with 298 probable cases. It marks the largest single-day total of the pandemic and the first time that number has crossed 1,000 in a single day. To date, there are 70,714 total cases and 1,031 deaths.

Over the last week, the KCHD has reported 3,474 total cases, for a daily average of 496 per day. At my last report, the county was averaging 51 cases per day, so the case numbers have increased 973% since that date. Five of the last eight days have seen confirmed numbers of over 500, a number that had only been reached twelve times prior to this point over the last two years. Active cases in the county now number 6,481, the highest total since September 13, 2021 (6,555).

Three additional deaths were reported today, bringing the weekly (and monthly) total to eleven. Twenty deaths were added to the county total on Thursday, but those resulted from the state audit, and none were from January. Of the eleven who died this week, two were ages 18-44, four were 45-64, three were 65-74, and two were age 75+.

Test demand is up significantly, and Knox County reports a 30.96% positive test result for the last week. About 9,000 vaccinations were given in the county in the last week and 57.86% locally are fully vaccinated. The rate is essentially stagnant, with 54.05% vaccinated at the end of October. A vaccination clinic for children will be held this afternoon and tomorrow at Chilhowee Park for children 5-11 years old. The current vaccination rate for this age group in Knox County is less than 20%.

I’ll include UTK and Knox County Schools data starting next week as there is very little information so far.