Inside of New York City: Dylan and other Nerdy Parts 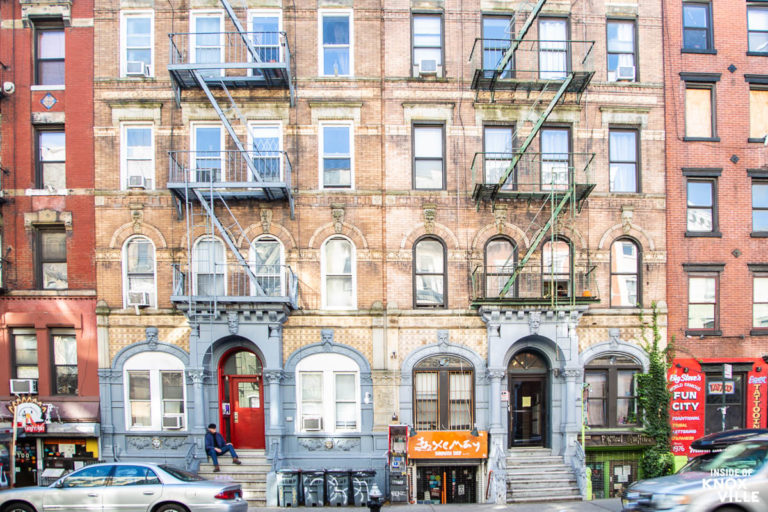 We’ll hit up another couple more New York City posts and then, I promise, we’ll return to our regularly scheduled programming. I appreciate you humoring me for a bit. This is the first trip outside family and friends I’ve taken in 21 months, and I simply had to share it. If you missed the first two parts, you can read about New York City Buildings and Art and follow along as I look at changes in the city.

For this portion, we’ll get Down in the Groove and get a little (or a lot) nerdy. If you are not at least a little nerdy, this article might be bad for your mental health. One of the reasons for staying in Greenwich Village was to check out historic Dylan sites. We stayed in the Washington Square Hotel, as previously noted, which was a spot Dylan and Baez shared for a bit. Here’s what she said of the time in Diamonds and Rust:

Now I see you standing
With brown leaves falling all around
And snow in your hair
Now you’re smiling out the window
Of that crummy hotel
Over Washington Square
Our breath comes out white clouds
Mingles and hangs in the air
Speaking strictly for me
We both could have died then and there.

It’s one of my favorite verses in any song and is largely what led us to the hotel. As we searched out Dylan sites, we also took note of other pop culture, or simply historic sites. I’ve posted a few here.

On the Bob Dylan front, I’ve already pictured the Washington Square Hotel, the Cafe Wha, and Cafe Reggio in the previous articles, each of them with their own Dylan connections. We also spotted the former entrance to the Gaslight, where Dylan and others played. We stopped in on Jones Street, the spot where Dylan’s photo was taken with Suze Rotolo and used for the Freewheelin’ album. We checked off Dylan’s first apartment he rented, rather than crashed as he did for a while, and the spot where Dylan wrote “Blowin’ in the Wind.”

According to the man, he wrote “Blowin’ in the Wind” in about ten minutes. Reportedly (according to this video), he sat at a table at a restaurant across the street from the Gaslight on McDougal Street, but it went through the half-block behind McDougal and his window was looking out on Minetta Street. At least that’s what we understand. It’s boarded up, now, but of all the historic spots on the trip, this was the heaviest, to me. Just imagine . . .

In the same area of the east village, we also hunted down Dave Van Ronk Street, named for the unofficial “Mayor of McDougal Street.” I had to spend a moment at The Stonewall Inn, which is considered ground zero for the Gay Rights Movement in America. Also, just a block off Washington Square we stopped at NYU’s Brown Building, which was once a clothing factory which burned 1911. The Triangle Shirtwaist Factory Fire resulted in the deaths of 146 workers, including 123 young girls and women. It lead to labor reform and was important in the development of the labor movement.

The biggest treasure trove, however, might be St. Mark’s Place, a three block street in the east Village. The Guardian asked the question of whether it might be the coolest street in America. It boasts its own Wikipedia page the incredible range of historic residents and happenings along the street. It’s so many, that we blew off Roosevelt and Leon Trotsky.

We did grab photographs of the home where Alexander Hamilton’s family lived after his death at 4 St. Mark’s Place. 25 St. Mark’s Place was the spot where Andy Warhol hosted his Exploding Plastic Inevitable events featuring music with the Velvet Underground. It is now, appropriately covered with all manner of anarchist stickers.

If that isn’t counter-cultural enough for you, consider that nearly across the street at 30 St. Mark’s Place, Abbie Hoffman lived and there, with Jerry Rubin, founded the Yippies. A bit further down the street, and in an earlier era, sat the Holiday Club at 75 St. Mark’s Place. At various times, it was a hangout for Frank Sinatra, Allen Ginsberg, and others.

The address that brought us to the street, however, was 96 and 98 St. Mark’s Street. It’s a tenement home that was the location for part of the video for “Waiting on a Friend,” featuring Mick and Keith in front of the building. But that’s not its biggest claim to fame. It was the cover for Led Zeppelin’s “Physical Graffiti.” Are we nerdy enough, yet? The shorter shot is closer to the album cover, while the taller shot shows the top of the building. On the album cover, the fourth floor was cropped out so the top floor would fit on the album cover.

We also looked up the spot in Little Italy (more of that part of town in the next article) where Joey Gallo, aka “Crazy Joe” was gunned down while eating clams at Umberto’s Clam House in 1972. The scene was memorialized in the film The Irishman, but for us it was immortalized in Dylan’s song “Joey.” Umberto’s (pictured here with a guy in a fur coat out front pulling people in – he claims different names at different times, such as “Tommy the Nose”) is no longer at the original location but has moved across the street and several doors down.

We wanted to enjoy a meal and to toast Joey and we decided we would eat, not at the current Umberto’s, but rather at the spot where it happened, 129 Mulberry Street, currently the Ristorante da Gennaro. We sat just beside the spot where Joey left this mortal coil. I’ve pictured the view through the window – maybe Joey’s last. We raised a glass and naturally, with a glimpse toward the door, we ate clams.

Last — and I bet you are glad if, in fact, you made it this far — in an entirely different part of town, we tracked down the Hotel Chelsea at 222 West 23rd Street. The façade was covered with scaffolding and tarps hid large amounts from view. It has seen three owners, constant legal disputes, and an ongoing renovation for the last decade.

The building is about 135 years old and has a history that is as rich as nearly any in the world. Arthur C. Clarke wrote 2001: A Space Odyssey while living there. Allen Ginsburg and Gregory Corso “chose it as a place for philosophical and artistic exchange.” It was the final home of poet Dylan Thomas. Nancy died here while living with Sid Vicious.

Jack Kerouac wrote On the Road while staying there. Thomas Wolfe wrote Look Homeward Angel there. It was a gathering point for sixties rock icons. Leonard Cohen wrote in “Chelsea Hotel Number 2” of his and Janis Joplin’s time there. Patti Smith and Robert Mapelthorpe lived together there, as she detailed in her beautiful National Book Award Winning memoir, Just Kids. It was also referenced in one of my all-time favorite songs, Third Week in the Chelsea, as well as Joni Mitchell’s Chelsea Morning.

And Bob lived there. I suspect by now you realize that single fact alone would make it worth my time.

There will be one more (much less tedious) article which will be a grab-bag of some of my favorite photos in Little Italy, Chinatown, and Greenwich Village.