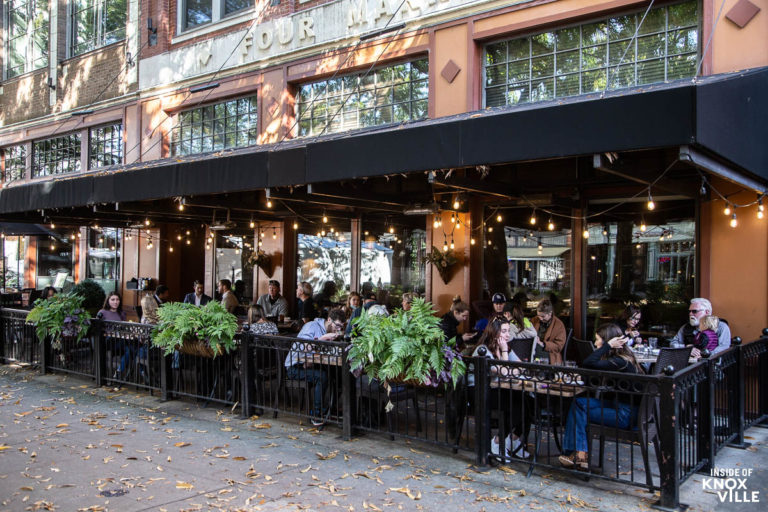 HD Patel and the Ephant Group have assumed ownership of Cafe 4 from Jim and Lori Klonaris in a transaction brokered by Oliver Smith IV and Will Sims for Oliver Smith Realty and Development. The Cafe had been owned by the Klonaris family since taking it over from the non-profit 4 Market Square and had grown into a favorite gathering spot for many. With the move, Patel and the Ephant Group adds to its growing portfolio of buildings and businesses in the downtown area. He recently purchased the Hope Building on Gay Street and has a lifetime lease on the former TVA Credit Union Building.

Cafe 4 is a different kind of acquisition for Patel, adding an ongoing and successful business to his list of around 30 properties developed or in development in the east Tennessee area. All his other properties include hotels, but he said this is “a great opportunity to own a downtown icon.”

Patel purchased all branding for the restaurant and does not plan major changes. He said he does intend to continue offering great food and service. The menu will remain the same and he has brought in a partner in the deal, Chad Kennedy of Kennedy Concepts, who has more experience with operating stand-alone restaurants. The group also owns and operates Loco Burro, Crawdaddy’s, Pucker’s Sports Grill, and Johnny Rockets.

The purchase does not involve the Square Room or ownership of the building, but rather is an acquisition of the business.

Former owners Jim and Lori Klonaris said they have shifted to a focus on owning the space where they operate their restaurants. Their current businesses include Kefi, Vida, The Vault, and Pressroom, three of which are housed in a building or space the couple owns. (Ed. Note: I previously said they own all those buildings or spaces and that was my error, as Leigh Burch owns the space including Kefi.) They will continue to operate the Square Room and are planning to open Bella, an Italian/American restaurant in Maryville. Jim said, “We are excited for our next growth stage.”

The deal closed yesterday afternoon, so as of opening this morning you can welcome the new owners to downtown.