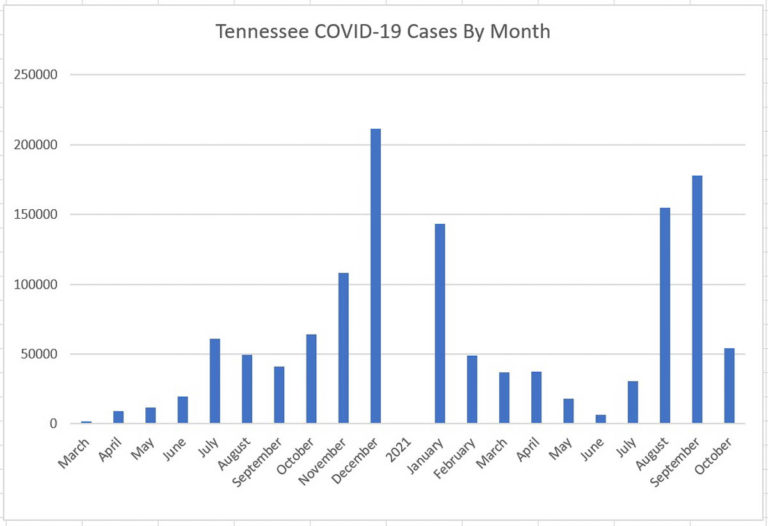 As promised, here is a final (for now, is that a thing?) look at the monthly COVID-19 case and death charts for both the state and the county. In both the state and the county, the trends were for dramatically lower case counts and significantly lower death counts. Based on past patterns, we would assume a significantly reduced death count in November.

Regarding the state numbers: They are estimates, but they are very close estimates. The state did not publish data for the weekend on Monday as is their normal pattern. I decided to proceed with this planned article. The data from the first 29 days of the month were available and I estimated the final two days using the current average of cases and deaths in the state. It should be very close. I may continue to provide monthly graphs and, if so, will make sure the numbers are adjusted as needed.

The graphs really tell the story: Cases dropped more dramatically than in any single month since the beginning of the pandemic, while deaths also dropped, but not as rapidly. It’s the same at both the state and county levels.

While cases at the state level for September 2021 were second only to December 2020, October cases at the state level dropped all the way to eighth for the highest monthly pandemic totals of cases. Deaths in September never rose to the levels of the worst months, peaking at the fourth worst monthly total, with deaths in October coming in at the fifth highest total of the pandemic.

A very similar pattern held in the county, with September 2021 coming in at 9,838 to rank as the second highest month on record. October cases dropped to 2,771 to rank as the eighth worst month for cases in the county. The 71.8% single-month drop in cases reported slightly exceeded the drop in state numbers.

Deaths in the county followed a similar pattern as the state, as well, declining, but not declining as much as cases, so far. Deaths in the county surged to the third worst monthly level seen since the beginning of the pandemic in September at 121. October brought a decline to 82, for a 32.2% decline, just a bit better than the state decline.

It is important to sound some notes of caution as we celebrate such a drastic reduction. First, We remain at levels almost twenty times higher than our June low of just 139 cases. While case numbers continue to decline, will they reach that low level? Additionally, we need to remember that cases can escalate rapidly. It took just three months to go from 139 cases in June to the recent peak of 9,838 in September.

The same can be said of the current COVID-19 death rate in the county: 82 in October is a great improvement over the previous month, but it remains more than 11 times higher than the 7 reported in May. Just as cases rapidly escalated, deaths did the same. After remaining at or below ten per month for three consecutive months, deaths rose from 10 in July to 121 just two months later.

Deaths should continue to decline in both the state and the county until such time as cases escalate once more. Will that happen? When will that happen? No one knows. We do know it is possible given what is happening in Europe right now. The virus is in decline now despite the fact that many people are acting as if it is over. Can we sustain the decline in cases and deaths without further mitigation efforts? We will see.