Inside the City of Knoxville Office on Homelessness 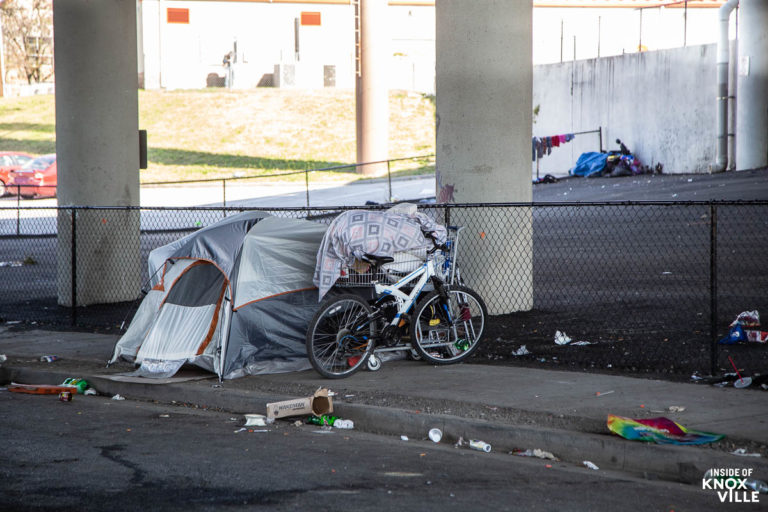 The city’s Office on Homelessness includes two Homeless Program Coordinators, Michael Dunthorn and Shawn Griffith. I interviewed Michael for WUTK in December 2018, and you can listen to that podcast here to learn more. I sat down with the two of them to learn more about what they do, to determine their perspective on the current homeless situation, and to see what they feel we need to do next.

Michael grew up in Oak Ridge and studied Political Science at UTK. Initially intending to attend law school, but instead landed a job in the Community Development Office with the city. A part of his job was managing homeless grants. He said there were few resources dedicated to the issue over twenty years ago when he started. With the local development of a Ten-Year Plan to End Chronic Homelessness, the city began to look at “housing first.” He worked on that, and the focus continued.

Shawn is from Knoxville and graduated from West High School. He left Knoxville and lived in Denver for a decade where he got a bachelor’s degree from Metropolitan State University in Cultural Anthropology and Political Science. For a time, he worked there with young voters, eventually entering social work, working with “residential youth who had substance abuse, mental health, and self-harm issues.” After nine years, he and his wife moved back to Knoxville where he worked with homeless youth through Helen Ross McNabb.

He entered a PhD program in Anthropology at UTK. Ultimately, he attended UNC, where he got his MS with a thesis focused on disaster response among unsheltered homeless populations. He returned to Knoxville about a year ago and joined the city as a second Homeless Program Coordinator.

The primary focus of the office is to ensure coordination between the vast range of agencies addressing pieces of the homeless issue. Michael said the intention to coordinate has always been present and Knoxville has had a Homeless Coalition for many years, formed by both the county and city in conjunction. Still, even something as simple as knowing the scope of the problem was impossible. No one knew how many homeless people were in the county at any given time.

In recent years, that issue has been addressed with a count on one night at the end of January each year. Still, the larger problem of coordination of services persisted. The office works toward, “getting everyone who cares about this issue to communicate, to work together, to coordinate, and to make sure the limited resources that are available aren’t being wasted,” due to duplication of services.

A glance around the room at any of the quarterly meetings of the mayor’s roundtable on homelessness shows the enormity of that simple task. The other side of the same issue is to formulate a system whereby a homeless person or family can navigate the array of services to find where they might best get their needs met.

As much as the groups try to work together, there are often new groups who see the need and, not knowing what is already being done, try to help by offering food or clothing or other help. The problem is that the agencies already offering these things are trying to leverage that help to pull people in to address their larger problems, whether it is addiction, mental illness, or simple short-term loss of housing. When they get their immediate needs met elsewhere, they may never learn of the other services available.

Michael added, “We are not interested in anyone being hungry. We’re not interested in telling anyone who wants to help, ‘We don’t need your help,'” but they want everyone who is concerned to work together with those who are already helping. Instead of meeting a temporary need, they’d like people to plug in to the groups who offer longer term solutions. The issue, he said, is “How do you get them all working together toward the long-term objectives of preventing homelessness when you can and hopefully ending homelessness for anyone who interacts with the system.”

HUD, in recent years, has required coordinated entry systems for homeless services to be eligible for money from the Continuum of Care Fund. Knoxville most recently received $1.4 million through the fund. What this means is there must be a way for homeless individuals to access the kind of support they need from a central point in local services. The central point must also determine greatest need, so those individuals are given priority.

Knoxville’s Coordinated Entry System operates from three access point locations and with local outreach teams. CHAMP assessments determine those who are most vulnerable individuals and pairs them with available resources. Shawn explained, “CAC is the access point for families, homeless youth, and elderly individuals. Volunteers of America is the access point for veterans and is a key intake and assessment location. The street outreach teams . . . will perform coordinated entry assessments in camps . . . Some people are not going to come inside to access services.” They are working toward any access point being able to funnel them into CHAMP.

The two repeatedly made the point that the cost of serving individuals on the street is much higher than the cost of providing them housing and meeting their needs there. The average person living on the street carries an annual cost of around $30,000 for ambulance service, medical care, potential incarceration, and more. Permanent supportive housing, by contrast, runs about $13,000 per year.

Michael added, “That doesn’t account for the negative economic effects they might have on businesses.” He said a study of the first-year expenses for residents at Minvilla contrasted the expense for those individuals in the year before they came to live there. It found similar results to the numbers above. “It’s less expensive to do the right thing.”

To make the efforts to house people work, however, there must be housing. The two said the shortage of affordable housing and housing where landlords will accept vouchers is a real issue. Additionally, each of the housing units used to operate separately and now coordination is being developed. By coordinating entry, it helps individuals more quickly be paired with appropriate housing.

UT’s school of social work office on Research and Public Service operates both the entry program and they coordinate the homeless database. United Way operates a Housing Navigator Office and works with the landlords to inform them of the programs available to pay rent and bring them into the program to build the housing options. They also work to make sure the housing arrangements work.

For the chronically homeless, permanent supportive housing, such as Minvilla and Flenniken, are likely to be the answer, but these stay near capacity. In a testament to how well they work, the typical resident who gets into permanent supportive housing will stay there for somewhere around 1,580 days, or about 4.5 years (Ed Note: This was updated to the correct amount of time. The previous statement of eleven years was inaccurate.) The Office on Homelessness works toward getting more of these units online, as they are currently doing with the Caswell Manor Project, which will provide 48 units – the first provided by the city in about a decade.

Michael said they know that many people, particularly downtown, are frustrated with the range of problems resulting from homelessness and they are working to respond to it. Still he says, “This is a national problem . . . even though the perception is that it is just us, it’s not.” He says we have made progress and we are better off, but at the same time, the unsheltered issue was already growing, and the pandemic made it worse. These are the people we see. They are also seeing the increased openness of drug use.

Shawn also pointed out that with the expansion of downtown condos and general gentrification of the area, there is a greater chance of interactions between downtown residents and homeless individuals. Largely, the homeless are where they have been for years, but new housing sets up a new dynamic. “When you are living down there, these folks are living there, too. These individuals are your neighbors and are accessing services . . . The real solution is connecting them to housing and not just ‘you can’t be here.'”

The fact that the state of Tennessee is one of twelve states that did not expand Medicaid was repeatedly mentioned as one of our issues. Shawn said, “Many cities around the country (located in states) that expanded Medicaid have built permanent supportive housing units that have a health care component built into them. They enroll all the people living in that space in Medicaid and that allows them to cover operational expenses and wrap around programs. Trying to implement that program here is challenging, if not impossible.”

There is some possibility of improved mental health and drug facilities locally. Both county Mayor Jacobs and Mayor Kincannon have petitioned the state for help, meeting with Governor Lee recently to petition for a new psychiatric urgent care facility. The two pointed out that homelessness isn’t simply a downtown issue, with large numbers in every direction from downtown. The city is also pursuing a federal Youth Homelessness Demonstration Program grant which would provide a separate facility for young homeless people who are often victimized by older people on the street.

In the short term, the best thing we can do, they said, is to offer to support agencies that are working toward helping the homeless find a home. Calling and requesting a co-responder team when encountering a person who is mentally ill is an increasing option as the program is being expanded from one team to four. Calling 911 should facilitate someone getting the right assistance.

Regarding panhandling, which is a separate issue, as many panhandlers are not homeless, the city has a new program, with signs directing people not to give to panhandlers, but rather to donate to agencies making a difference. It’s a way to help, rather than a momentary act that might feel good, but is likely of limited true helpfulness. Programs are being instituted to battle litter and particularly needle litter.

Community support for the solutions, particularly for permanent supportive housing, is critical. Without community willingness to allow supportive housing to be spread around the city, it becomes very difficult to increase the supply it to the extent needed. The two stressed that more affordable housing is also critical. Without resolution to these needs, the current will remain. It’s important for those in the community who understand this to make their voices heard.