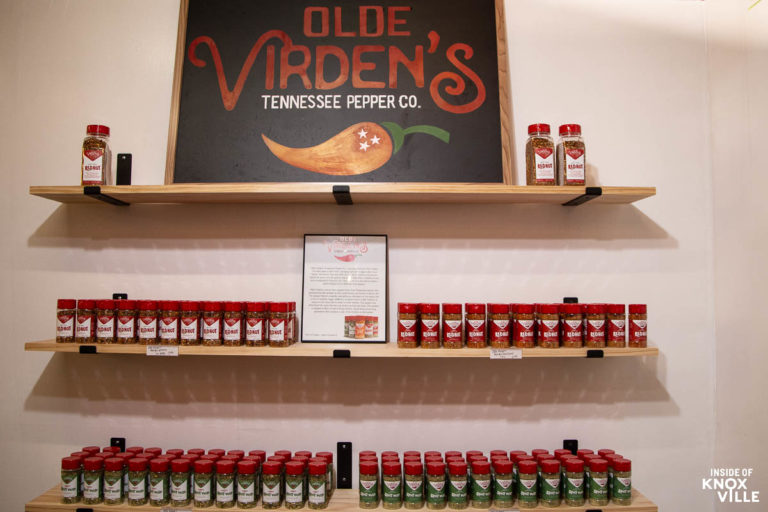 Allyson and Chris Virden have been local fixtures for a number of years. You may know them as co-owners and operators of Mid Mod Collective or you may know them for their Olde Virden’s Tennessee Pepper Company. They sometimes sell their pepper products at the Market Square Farmer’s Market and their products are now in many local and regional grocery stores. The two have started a new venture, with the opening of their Artisanal Food Market at 204 Randolph Street (just behind Marc Nelson Denim).

I visited with Allyson and Chris, as well as Lauren Claiborne, who is their lone employee on the launch. You may know Lauren from her sign art, or from seeing her in stints at Three Rivers Market and, long ago now, at Just Ripe. Chris and Allyson started Old Virden’s Tennessee Pepper Company in 2014, around the same time they helped open Mid Mod.

The genesis of the line of pepper products has its roots in the twelve years the couple ran LeConte Lodge. Allyson cooked lunch and dinner for the guests and crew and the two managed the lodge. “In 2013 we had a crew that liked hot sauce.” She said they had a dozen or more different kinds of hot sauce for them open at any given time. Intrigued, Allyson made pizza one night and instead of hot sauces, they brought out “one generic bottle of crushed red pepper.”

That set Chris’ wheels in motion considering that there was a wide range of branded hot sauce, but just generic crushed red peppers. It’s the number one condiment for pizzas and it’s just a plan container, with no label. “Every time we’d hike off the mountain, I’d go in a grocery store and there was McCormick’s and Food City brand. There was just no soul to it.”

He began to think there had to be a better way, and perhaps they could be the ones to do it. “I borrowed a friend’s dehydrator, went to every grocery store and bought every pepper I could find, dried them, and invited a friend over.” That began the taste testing of a wide range of available peppers. “We ordered a pizza and a six pack of Miller High Life and that was the beginning.”

In 2014 they put their notice in at the Lodge and split time there and making peppers, taking them to the farmers’ markets. Allyson said, “For about six months we walked around town with little baggies of peppers . . . and had our friends taste everything. That’s when we came up with the original blend, ‘Olde Virden’s Red Hot Sprinkles.'”

Chris said they moved from farmer’s markets to Three River’s Market, to Food City, Kroger, Earth Fare, Whole Foods, and Publix. “Our goal is to be a national brand. We have a local farmer who grows all our peppers for us in Grainger County.” It’s been a slow process getting into grocery stores and it has been a steep learning curve. “The thing we had going for us is that no one else is doing what we’re doing. There’s no salt, there’s no sugar, no additives. We dry our peppers the day they are picked.” If you have high blood pressure and you are trying to avoid salt, it’s a great option to the sauces,” most of which are heavy on salt.

Allyson said that the point, beyond all that, is the taste of the various peppers. Chris said they get people all the time who are limited in their diet and say it has been a long time since they’ve found a spice or taste that sparks joy. “A lot of that kept us going.” They made the point that in the slow food movement, everyone wants to know where their chicken came from but, no one asks about their spices. Many spices are imported, passing through many hands and have been sitting for as many as five or six years before they land in a grocery store.

“It’s a level of freshness that you don’t find. The various rubs order from the same wholesale providers and mix it up. We make our stuff. We see it from farm to the grocery store.”

The operation started small — in their Gatlinburg kitchen. “It was the worst thing ever. We’d go to bed at night and put a towel to block the crack in our door. Eventually it moved to small building behind their home with about 200 square feet and multiple dehydrators. By 2019 they decided that they needed to move to Knoxville, and they needed a larger facility. They bought a building off Strawberry Plains Pike that used to be a pizza restaurant that they could convert to a home and a factory.

“We’re growing our line of pepper blends and are in over 400 retail stores,” Allyson said. “One thing that really intrigued me was coming across brands similar to ours . . . that aren’t represented in Knoxville. Brands like J.Q. Dickenson Salt Works out of West Virginia” are known to local chefs, but not to many outside that circle, for example. “We thought, there are just tons of brands with really good stories and we want to sell their food” alongside their own products.

Chris said, “As a small, specialty food vendor, I realize how hard it is to get your food in front of other people . . . Starting a food company is hard. I tell people, ‘If you want to start a food company, let me know, and I’ll talk you out of it.’ This way, we can give other people the help that we got in a lot of ways . . . We got to where we are because people shared our story, and Allyson and I really believe in paying it forward and paying it back.”

Lauren said she remembers the day Chris came into Three Rivers Market to make his pitch for the product. She said it isn’t like anything else you’ve had before. She said Allyson reached out to her a couple of years ago to make a sign. She said she is passionate about local food and everything they are doing speaks to what is important to her. Allyson hadn’t intended to have an employee at first, but realized they had to have help and called Lauren.

They considered other locations, including a mobile option. When they happened on this location, it checked a lot of boxes, including the capacity to handle pallet shipments. The size was perfect and, located just a few blocks from the proposed baseball stadium and the attending development it will bring, they feel it is going to be a very good location. They also are open to expanding to other locations in the future.

They’ve been scouring the country for small batch brands of foods including for example, a fisherman from Maine who cans his seasonal catch and distributes them personally. They have some of his canned fish in their store. They have chips, white barbecue sauce, crackers and much more. (I loved their cheese straws.) They are expanding inventory and plan to have about four times more product than is currently on the shelf.

Allyson said the products can best be summed up as “If you are a foodie and you are adventurous, this is the place for you.” They are working with Real Good Kitchen to bring in products being produced there. They have chocolate items produced locally, including a Lirio dark chocolate bars, one of which (spicy chocolate) has Virden peppers inside. “We’re hoping it will be packed with stuff you’ve never seen before.” Some of the products are local and regional, but they are bringing in great small business products from all over. “There’s great food all over the country and we don’t want to limit ourselves.”