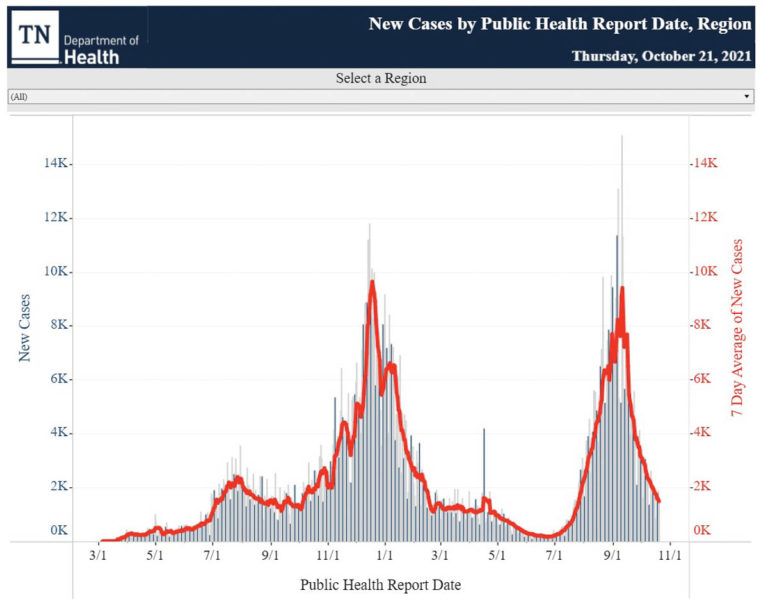 Welcome to the Friday report. This one comes to you on a week in which Inside of Knoxville won an award from the East Tennessee Society of Professional Journalists. Thanks to a nomination from Rusty Odom of Blank Newspaper (who won six awards of their own!), Inside of Knoxville won first place for Pandemic Reporting (Digital Only) for 2020. I’m honored.

I remain committed to having next Friday be my last report for a while. Numbers continue to drop in the U.S., the state, and the county and it appears we may have a break. I’ve gotten more pessimistic regarding how low our numbers will go this time and about our chances of a resurgence this winter. If warranted, I’ll bring my coverage back later.

Primarily that tempering of my hopes comes as I watch a growing number of countries across the world return to double-digit percentage increases in cases. The U.K., as an example, has a 68% vaccination rate, to our 57%, and yet they’ve seen a 35% increase in cases over the last two weeks. They are far from alone, with quite a few European countries experiencing similar increases. It is clear we are not finished with the virus and that it will not soon be endemic on the level of the flu, for example, and case rates may not drop as low as was the case last summer.

The recent decline in international COVID-19 cases has at the very least, paused. Driven largely by increases in Europe, cases increased by 1% over the last seven days, while deaths dropped by 2%.

To further illustrate the limits of vaccinations on thwarting surges of the virus, Spain is the seventh most vaccinated country in the world with a 79% vaccination rate, far above our 57% rate, and yet Spain has experienced a 20% increase in cases in the last seven days. That said, their increase has brought them to 4 cases per 100,000 people, while the U.S., enjoying declines in cases, is still reporting 23 cases per 100,000. So, while we are improving and they are getting worse, we have about six times their rate of new cases.

Thirteen countries, mostly in Africa, have fully vaccinated fewer than 1% of their citizens. This number is down from 15 a week ago. The countries in the world with the lowest vaccination rates all have rates .3% or lower and include (from the lowest) Burundi, Congo, Yemen, Central African Republic, Chad, and Haiti.

Almost 46.2 million cases of COVID-19 have been confirmed in the U.S. since the beginning of the pandemic, along with 753,749 deaths from the virus. The U.S. continues to lead the world in total cases and deaths. Among countries with at least 1 million citizens, the U.S. is seventh in per capita cases, dropping a spot since last week. The U.S. moved up a spot in per capita deaths for the second consecutive week and is now thirteenth, passing Slovenia.

The U.S. is averaging 1,509 deaths per day, down from 1,818 per day a week ago. Hospitalizations have fallen by 19% in the last two weeks. The states seeing the highest current rate of death from the virus include (from the top) Wyoming, Montana, Alaska, West Virginia, and Idaho. The states with the lowest current death rates include Connecticut, Rhode Island, New York, Massachusetts, and Nebraska.

The states with the highest rate of increase in virus cases this week are, in order, Alaska, Montana, Wyoming, Idaho, and North Dakota. That said, even these states are seeing a decline in cases, except for Montana. Like most of the country, even though they lead the country in infection rates, they are seeing a decline in spread. In order, these states rank 32nd, 36th, 48th, 49th, and 45th in full vaccination rates, for an average of 42nd.

The states with the lowest spread rates in the country this week are Hawaii, Florida, Louisiana, Connecticut, and New Jersey. In order of full vaccination, these states rank 18th, 20th, 44th, 2nd, and 7th, for an average of 18th.

The state of Tennessee has reported 1,270,876 cases of COVID-19 during the pandemic. After leading all states in the country in per capita cases for weeks, now the state is 2nd behind North Dakota. The state added 9,896 cases in the last week, down by about 4,200 from the previous week. The current daily average of 1,425 new cases per day is down from 2,043 a week ago. The rate of spread in the state is 19th lowest in the country, with a 43% decline in new cases over the last two weeks.

16,104 Tennesseans have died of COVID-19, including 335 this week, an increase from 262 reported last week. The state is averaging 48 deaths per day, up from 38 a week ago. Tennessee ranks 22nd in per capita COVID-19 deaths since the beginning of the pandemic, down a spot from last week. Though the increase in deaths seems counter-intuitive, deaths are reflecting infections from weeks ago, and with hospitalizations continuing to decline, death rates will almost certainly follow.

The pace of testing has continued to slow in the state, while the positive test rate has slowly increased for the last two weeks. The current average positive test rate is 12.45%, down from 14% a week ago. Tennessee remains ranked at 39th in per capita testing among the states (and D.C.).

Today, the KCHD is reporting 82 newly confirmed cases and 81 probable cases. Active cases now number 1,398, a drop from 1,757 a week ago. Other than yesterday when the number was 1,397, it is the lowest number of active cases reported in the county since August 4 (1,240).

COVID-19 hospitalizations continue to decline, with the 19-hospital region reporting 288 current hospitalizations from the virus, with 83 in area ICUs, and 56 on ventilators. A week ago, those numbers were 327, 110, and 81, respectively. 19 ICU beds are currently available in the region, down from 21 a week ago.

East Tennessee Children’s Hospital reports three pediatric COVID-19 hospitalizations over the last week, down from four the week before. Two were 0-5 years-old and on was 12 years old or older. Of the older group, the patient was not vaccinated. As of the last report, three children remain hospitalized, with none in the ICU.

Test demand continues to drop, with about 4,900 tests reported over the last seven days. The positive test rate of 12.4% for the week reflects a slight drop from 12.7% last week. Turnaround time for results remains just under 1.5 days.

The pace of vaccinations continues to decline in the county, with 6,815 shots given this week, down from 7,590 last week and 12,033 the week before. This includes booster shots. First and second vaccination rates remain stagnant, with 53.62% of Knox County residents fully vaccinated (up from 53.24% last week) and 57.64% having had at least one shot (up from 57.4% a week ago).

The Knox County Schools are reporting 72 active cases this week, far below the 179 they reported just prior to their fall break. The University of Tennessee is reporting 26 active cases, down from 28 a week ago.