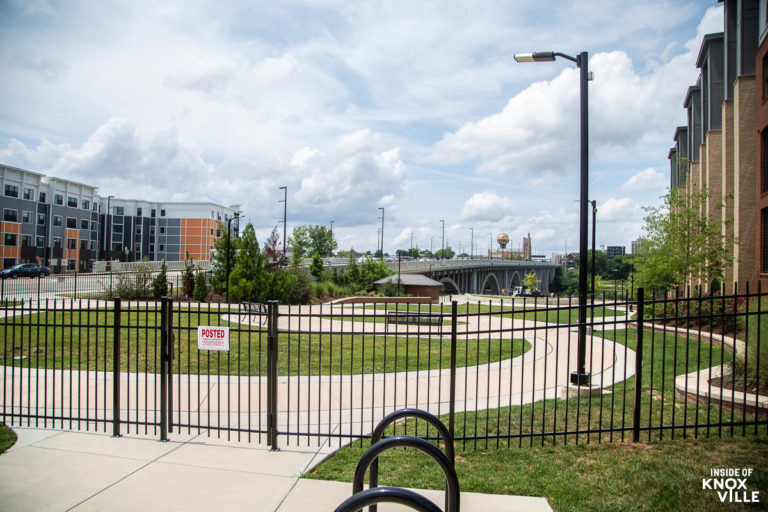 Gates Blocking Riverwalk Behind One Riverwalk Apartments, South Side of the Tennessee River, Knoxville, July 2021

I had a number of readers and people on the street ask me what is happening on the south side of the river. It appears permanent fences have been erected featuring signs warning against trespassing. According to the signs, readers are not allowed to climb the fence even to hunt or trap! Very disappointing to this trapper, for certain.

At the other end of the (currently ironically named) One Riverwalk apartment complex is a similar fence and sign preventing entry into the pocket park. I presume a gate has been erected on the other side of chapman at the entry to that section of river walk. We should hope so, should any errant trappers enter only to find themselves captured by the enclosures while illegally seeking game.

Before I had a chance to investigate, those steely trappers over at Compass got the scoop, which they included in their morning email blast. (Available to subscribers – of which you should be one!) According to their piece, the fences were erected by Vic Mills, owner and developer of the complex, who has gotten crosswise with the city.

Their original agreement called for Mills to make certain improvements to that section of the river walk before handing over ownership to the city. He indicates those improvements have been made and states that the city is adding requirements. The city counters that he has not completed his agreed to portion of the work. In response, Mills erected gates which, not only inconvenience passing pedestrians and cyclists, but must frustrate some of his own residents who likely walk across the Gay Street Bridge from this side of the building to downtown.

I reached out to Stephanie Welch, Knoxville’s Chief Economic & Community Development Officer and Deputy to the Mayor, who said simply, “We are actively working with the property owner in an effort to assure that the remaining work is completed and to open access to the public amenities, including the pocket park.” In the meantime, while the state now allows you to carry your gun about the city, you can’t use it to hunt along this stretch of walkway.

The other spot I rambled past was the former and future site of Fort Kid. Long beloved by many, the structure was deemed unsafe and was demolished and removed last year. A new slope replaced the apparently failing retaining wall and a smaller hill top established. It seems more likely to house a small encampment as opposed to an entire fort, but the city is assuring us it will be wonderful.

Last month City Council gave the green light to an agreement (for up to $450,000) with Great Southern Recreation to rebuild the fort. Thomas Boyd has also pitched in $200,000 and the Downtown Knoxville Alliance has pledged $250,000 to the effort. Hedstrom Landscape Archetecture “has developed a concept for the slope and path, which will be built in conjunction with the City play structure being installed atop a regraded flat area at the top of the hill. The project will include a newly-created accessible entrance to the play structure and a new accessible parking area.”

While the hill currently sits empty amidst the “construction zone” signs, the plan calls for construction to begin in “late summer” and to concluded with the crowning of the hill top with new equipment this fall. You can take a look at what to expect here.