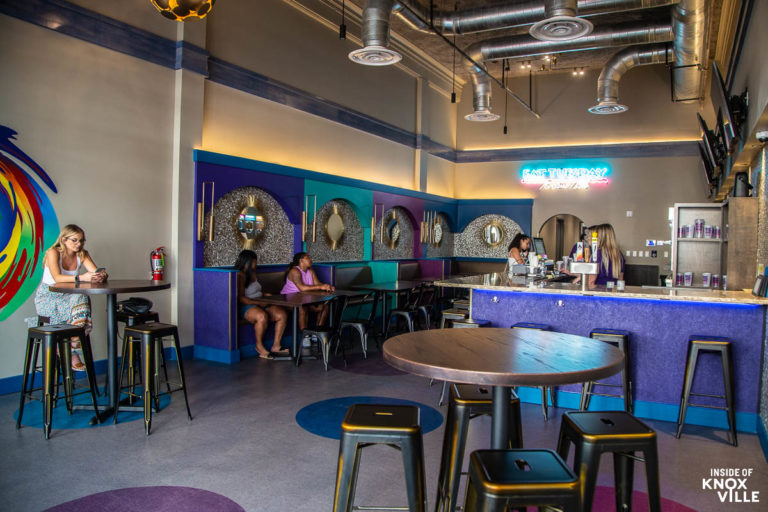 Downtown has its second New Orleans based business (the other is Ruby Sunshine) with the opening of Fat Tuesday at 417 South Gay Street. Located in a portion of the Kress Building, it is also the first business to occupy the Kress Building in roughly a decade. The space once belonged to Jay’s Mega Mart, which operated at least as late as 2010.

Starting with the original store, New Orleans Original Daquiris in Hammond, Louisiana, in 1983, the first sister bar, Fat Tuesday, opened in Atlanta in 1984. The goal was simple: provide quality frozen drinks, served quickly. The answer to that equation came in the dispensers ready to fill drinks from the tap.

The Knoxville location is owned and operated by Knoxville residents Laura and Kenny Chimeno, who moved here from Louisiana and missed the Daquiri Bars which were common there. Kenny will be mixing the drinks for downtown patrons. There are over forty locations in the U.S. and several have opened internationally.

The drinks are offered from shots through a 22 ounce tumbler. The tumbler costs $22, but it can be used again at a reduced cost of $16. Carry out is allowed, but there are rules: Only the 16 ounce size is available for carry out and it must have a lid (which is taped on) and it must be accompanied by food. You can snag a 16 ounce drink and pretzels for $12.

Flat bread pizza and artichoke spinach dip are also included on the menu. I opted for a 16 ounce Hurricane and an order of (six) cocktail shrimp for a total of $18 plus tax and tip. The shrimp were good and the hurricane packed the punch for which it is known.

Kenny said an official opening is planned for later this month, with a ribbon cutting and a band from New Orleans. He said they are in soft-opening mode for now, but they are open full, regular hours. The bar opens at 11:00 am each day and is open until 11:00 pm Monday through Thursday, midnight on Friday and Saturday and Sunday until 10:00 pm.