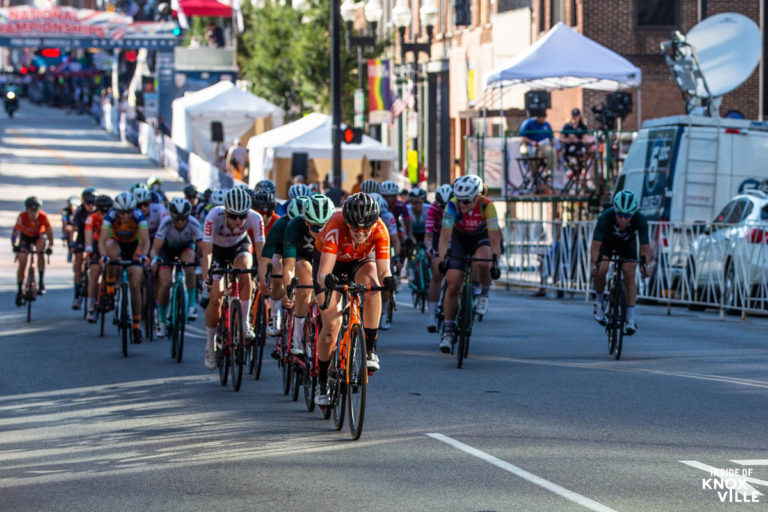 It is entirely possible that I’m behind the curve but, for me, this weekend’s U.S. Pro Cycling Championships felt like a big coming out party for the city after a long run of anything but normal. The crowds may not have been as large as past championships, but they weren’t far off. And, again this is my personal experience, I wasn’t nervous about every person who expelled a breath in my direction.

It’s not to say it was normal and everything is back to 2019 status. For starters, the events were outside and I’m not ready for an indoor crowd of quite this size. Also, to be approved for official photographer status I was asked to have a PCR test and masks were required in close quarters with athletes or other media. I declined the test and “official” status in favor of shooting from the sidelines. I’m vaccinated and I’ve come too far without having the nose jam to start now.

For the Criterium, which is about as an exciting and intense a sport event as you’ll ever attend, I walked the course with both the men and the women. After shooting it for the last two years, my focus was on shots that display the city nicely and happen to have some cyclists in the foreground.

Both races were intense, very high-paced, and featured wrecks in the last 300 meters leading to the finish line. The course started on Gay Street heading south, turned east on Hill, north on James White Parkway, west on Church before taking a series of difficult turns on the uphill, first north on State, then left on Clinch, and right onto Gay, all in a stretch of only three blocks. Crowded fields that close the finish can be a recipe for disaster in cycling and it was in this case. The women repeated the 1.7 kilometer course for 70 minutes and the men did so for 90 minutes.

In the end, “For the Elite Women, Kendall Ryan (Ventura, Calif.; L39ION of Los Angeles) took to the front in the third to last corner and held her position all the way to finish. Luke Lamperti (Sebastopol, Calif.; Trinity Racing) outsprinted riders on both sides to win a national championship, becoming the youngest rider ever to win the Elite Men’s Crit.”

I’ll soon post photos and a summary from the Sunday road races.