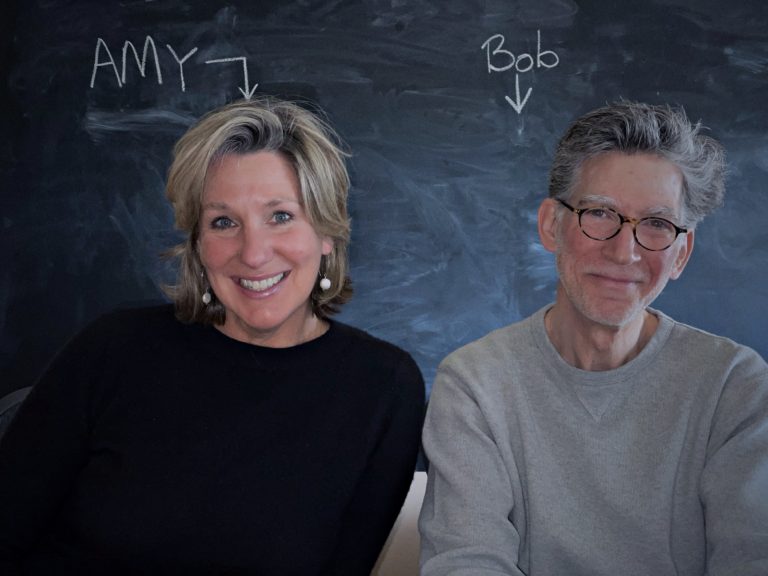 I noticed a mention of 502 Jingle House on Facebook, a business I’d never heard of, and realized the address was on my block of Gay Street. Curious, I soon realized it was a new part of an established production business, Wide Lens Media, located at 418 S. Gay Street, Suite 502. I reached out to Amy Gibson, who co-owns the business with Bob Deck, and learned it was their new fun foray into the jingle business. After offering to do a story on the company, Amy told me they had written a jingle for Inside of Knoxville. I was in.

I’ve known Amy and Bob for most of the last decade, but I really didn’t know their stories. I knew Bob through his music and Amy through mutual friends. I met with Amy and asked her to tell me their stories and the story of their company which, as I learned, is celebrating its tenth anniversary.

Bob, originally from Detroit, moved to Knoxville via Vermont in the 1980s, working in production. He has also been involved in theater, studied to be a teacher at one point, and can be found playing guitar with a range of local musicians. Amy is from Kingsport, and came to Knoxville to study at UT. She said she’d always seen herself as “wanting to be on the front lines helping people.

She’d imagined working in city management at some level. When she landed an internship with Mary English at the Energy Environment and Resources Center, she got a taste of environmental policy work and fell in love with that, which led to the Ph.D. program. She obtained a Ph.D. in Sociology and Environmental Policy. She taught environmental studies at Maryville College, while working with non-profits and, eventually, at the Howard Baker Center and served as the original executive director at the Knoxville Botanical Gardens.

At the Howard Baker Center for Public Policy she developed public programing, the goal of which she described as “helping people better understand the world.” After five years, structural changes were made in the mission of the center and she left in 2011. She started the business as AK Consulting and landed her first big project with Compassion Knoxville, a project started by the city and the county to address homelessness.

She remembered a project on homelessness that Matt Shafer Powell had led at WUOT, bringing the stories of homeless people to the front of the conversation, featuring photographs, text and great music. She had an idea to do something similar with Compassion Knoxville and contacted him. He brought the original team from that project together to meet with her and Bob was part of that team.

She met the team, and Bob, at Tomato Head. Bob was leaving his business, Cable Spots, where he had continued his career in production. The two “immediately hit it off,” hitting each other with ideas. Within about six months the two were talking about how he might join the business and found their interest in community-based projects to be mutual and he became a part of the company. They subsequently became Wide Lens.

She describes Bob’s role with the company as the “production and marketing person” for the two-person company, while she is the “academic, social science, activist, want to save the world person.” She also had an art background, studying photography as an undergraduate. “When Bob and I met, I’d just started the business . . . I was still doing case study work and traditional work I’d done as a part of my academic career.” She loves telling the stories and Bob is passionate about the editing. Bob provides every client with an original score.

A turning point came when a friend at the International City/County Management Association in Washington, D.C. contacted her to see if she was interested in doing case studies of how cities across the country were deploying solar power, with the idea of sharing ideas which were working well, with other interested cities.

They found that city managers appreciated what they did, but said they were inundated with material and could not work through it all. They wanted a condensed version of what other cities were doing. Bob suggested they begin to take some video on their site visits and produce that to augment their reports. They started by using their iPhones. They realized how impactful the video was and the video portion of their business became the primary focus of the business — though now they work with much nicer equipment.

They have recently worked with TenneSEIA, the state solar organization, and for the Smart Electric Power Alliance, and Legal Aid of East Tennessee. They worked with Legacy Parks, on their “Ten Songs for Ten Years,” celebration, featuring local musicians performing throughout the Urban Wilderness. They filmed and edited the profiles for the Every Woman Vote series on WUOT, producing 100 videos celebrating the 100th anniversary of the women’s right to vote. They’ve worked significantly with the YMCA of East Tennessee, doing member and facility profiles, profiles of mentors and more. They also produced two of the live streams for Big Ears.

At the ten year point they started thinking about new possibilities, like podcasting and some similar efforts. They are looking at a range of possible topics to cover including coverage of local food systems and a sequel of sorts to the “Every Woman Vote” series, called “Every Woman Can,” allowing women to honor and recognize the women who have changed their lives.

They also began to think about the soundtracks they had accumulated. Amy suggested they upload all the soundtracks they had accumulated over the years and offer them for purchase. Within two weeks they had uploaded them. She said Bob was always singing jingles and so 502 Jingle House became a reality. Bob developed three samples; audio for Flour Head Bakery, and audio with video for Dale’s Fried Pies and for Inside of Knoxville, to use as examples for people who might be interested.

She said they feel proud of the work they’ve done, and this seemed like a fun venture to launch on the tenth anniversary. The forty-five samples are uploaded and can be purchased for use behind other content. Some are six minutes and others are fifteen seconds. They can be used in their entirety or in part. She said they are trying to make it as affordable and easy as possible.

You can check out Wide Lens on Facebook, their webpage or Instagram. You can check out the new project, 502 Jingle House on Facebook or on the webpage. You will find the video with my jingle below, along with those for Dale’s Fried Pies, and Flour Head Bakery.