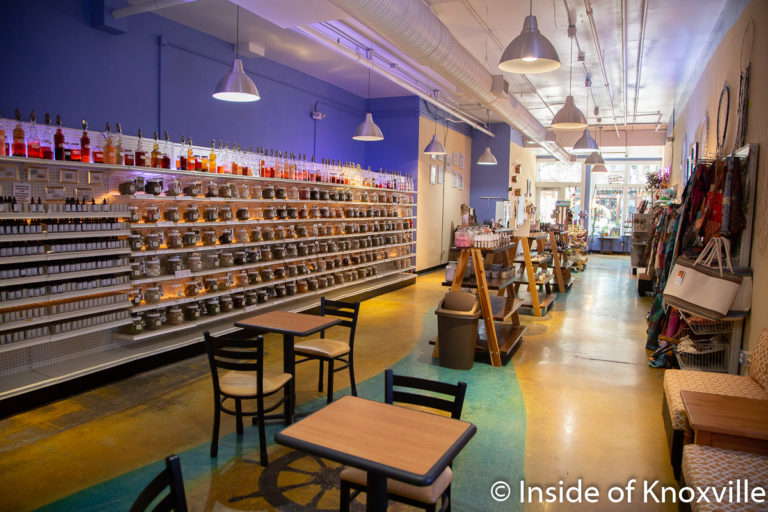 While the feared wave of closures may not have happened in downtown Knoxville, there have been loses. Each is different from the other with the reasons for closure sometimes overlapping, though unique to each business. In this case, the timing was about as bad as possible. Nature’s Crossing tea room and shop on Market Square location opened May 14, just after the seriousness and longevity of the pandemic began to settle in for most of us.

Owner, Tammy Babb told me she had assumed events would help drive awareness of her new business, and would drive sales. She had hoped to open in April in time for all the festivals, but the opening was delayed due to the shut down and the festivals were cancelled. She imagined the Market Square Farmers’ Market would drive sales and she said even from the distance of Mary Costa Plaza, she did see a bump, but nothing like what she would have expected if it was on the square. She also cited the loss of UT games.

While she experienced a slight dip in sales at her original location, she said while business was adequate in the early weeks, it got slower and slower. Christmas, she said, was particularly disappointing. At the end of February, she simply felt it didn’t make sense to continue.

She also noted another significant problem with operating the business. She said there were ongoing issues with apparently homeless people on the square. She said that after a series of incidents, the young girls who worked in her business no longer felt safe. She didn’t have enough cash flow from the low level of business to hire a manager, so she was forced to be at the shop every hour it was open, and that wasn’t sustainable.

I asked her for specifics regarding the issues and she rattled off a litany of incidents. She said one person urinated on the front door during business hours. A lady entered the store with a stick, yelling and cursing. She was ultimately arrested when she spit on the officer who responded. Another man was following an employee and scaring her, but left when the police arrived and they told her to call if he came back. Mostly, she said, the police told her their hands were tied.

She concluded, “I love downtown and was very excited to open a store there.” She pointed out she has a treasured photo of herself on Market Square when she was three years old. “I hope it comes back to what it was. I love the square, but this was my experience.”

Ed. Note: This one stings a bit to me, not so much because I loved this shop or love tea, but because I think it is a business that could have thrived on Market Square given the right circumstance. Given our large tourist contingent in the last several years, as well as the day visitors from all around, I think someone will come in and make a similar idea work when times are better. Then again, I’m often wrong in my speculation about which businesses will do well and which will not. There are a lot of variables.

Ed. Second Note: Regarding the kinds of issues regarding our homeless friends mentioned above, I’ve heard similar stories from other business owners in recent weeks. Some feel the issues have gotten worse. From those I’ve spoken to, they have compassion for the plight of those in the situation, but simply have a difficult time operating businesses with urine on the front door, feces on the doorstep, and so on. They don’t recount the tales so much as judgement, but as a statement of reality. It’s an issue I plan to explore further in coming days. At its root, of course, is  a large number of personally tragic situations, fueled by much larger issues.