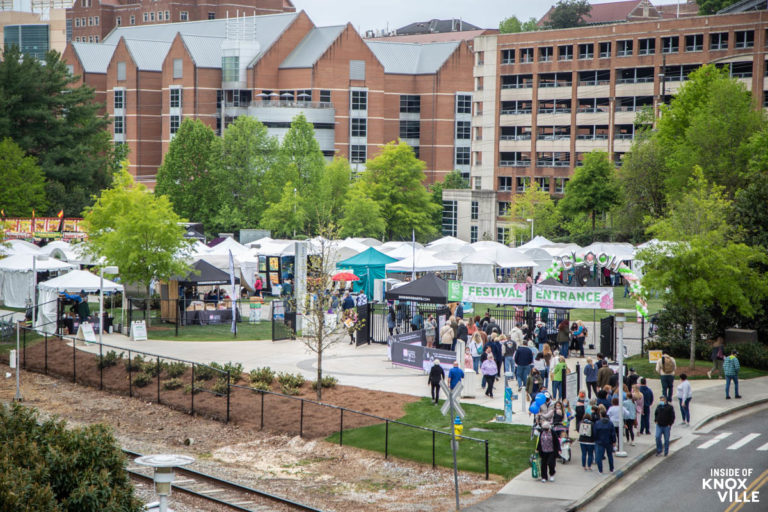 When I learned earlier this year that the Dogwood Arts Festival would return to a live setting, I had mixed feelings. Picturing past festivals, it was hard for me to imagine holding the event in the current safely, given the circumstances at the time. As it turns out, circumstances have improved locally and people with much more imagination than my own were in charge and did a wonderful job.

The performance lawn at the World’s Fair Park was the site of the festival and, with the major improvements, thanks to the city’s investment there, it made a great spot for re-entry into major in-person events. The drainage system installed by the city beneath the field truly made the festival possible, as veterans of events there will remember the muddy marsh that emerged with even a small rain in the past.

All food vendors were located at the south end of the lawn; the spot where the stage has traditionally been located. Again, the improvements put in place by the city made this much more workable as a major emphasis on providing power to the cite allowed for food vendors to operate efficiently. Tables were well spaced for eating and for the most part, people spaced themselves apart in lines.

The number of artists were reduced from previous years but, at least to me, seemed more than adequate to replicate the feel of having lots of options for purchase and browsing. Some of the best from previous years were present once more and several new names were sprinkled throughout. Masks were required and, as far as I could see, were mostly worn without comment, both by vendors as well as patrons.

Music was provided via two small stages, one at each end of the park. The artists alternated 30 minute sets, with a shift from one stage to the other every thirty minutes. I stood and listened to each of the two artists who played while I was there, Redd and Pale Root. Both were wonderful to hear and performed excellent sets. The sound was great and just loud enough to permeate the site with bit of ambience and not overwhelming when I approached the stage.

Both woodworkers are from Kentucky. I spoke with James about the guitars he had on display (and pictured here). I asked how long he had been making guitars and he said, “about two weeks.” I was floored. He said he thought it would be simple enough, that he’d cut the wood and be an assembly man from that point. He was disabused of that notion as he began to understand how the wood informed the sound – even of an electric guitar. They were amazingly beautiful instruments and he said they play very well.

In the end, the weather was dreary when I attended, though much better than Saturday, I am sure. It was unfortunate because this excellent effort at a return to some normalcy deserved a perfect weekend. I felt completely safe as I moved about and the limitations did not remove the sheer joy of seeing the return of the Dogwood Arts Festival, hearing live music for one of the first times in months, and being surrounded by other humans. No amount of weather could take those simple joys away.