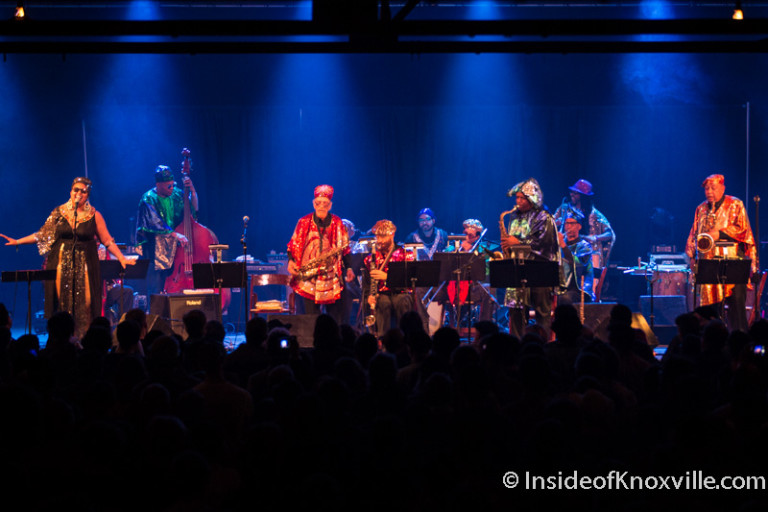 Sun Ra Arkestra, The Mill and Mine, Big Ears, Knoxville, 2016

There are a lot of little signs that businesses and patrons are taking tentative steps toward pre-pandemic normal. Vaccination rates have give a large number of people immunity from COVID-19, and those numbers continue to increase. Local cases, hospitalizations and deaths have declined. Spring has sprung and many people are ready to get out.

One of the hardest hit industries has been the entertainment industry. Musical artists, theatrical productions, comedians, dancers and others have been unable to travel. Most large venues closed for months. Even as the crisis begins to ease, re-starting the touring entertainment business is difficult. Bands can’t travel without venues. Venues can’t open without artists. Capacity limitations are a non-starter for many venues which need close to sell-out ticket levels to make money and pay performers and everyone associated with the shows.

Here’s a look at what the largest downtown venues are currently doing and saying about their near future. In a nutshell: they cautiously expect to return to full capacity shows this fall.

With the announcement earlier this week that the Knoxville Symphony Orchestra is planning a full season, which includes performances in three of the major downtown venues, including the Tennessee Theatre, the Bijou Theatre and the Civic Auditorium, it became clear that a shift had happened. I spoke with Tennessee Theatre Executive Director Becky Hancock to see where things stand now with the theatre and what she sees for the coming months.

She said the symphony is currently performing a series of extremely limited seating (about 200 patrons) concerts that will run through April and May. Otherwise, she said that most of the events are small and private. While few touring entertainers are currently on the road, the severe capacity limitations would make profitable events impossible.

For the summer, they plan to offer the classic movies which have become a tradition in the theatre. Capacity is still being determined but,  unlike previous years, reservations will be required, with family groups spaced apart from one another. Masks and screenings at the door will be required. She also pointed out that changes have been made to the HVAC system to make it less likely to spread air-borne illnesses.

They are currently selling tickets to a full-capacity Melissa Ethridge show on August 22. Black Jacket Symphony is scheduled for September 30 and October 1. The Alton Brown show is sold out with a full house on October 29. They are also close to confirming titles for the Broadway at the Tennessee series which will run from late 2021 into summer 2022.

(Edited to include information received after posting.)

I reached out to Courtney Bergmeier, Executive Director of the Bijou, who told me the Bijou had invested in streaming equipment last October and used that to start their “Live from the Bijou” series. In addition to the streaming audience, the first shows allowed a  audience of 30. The in-person seating was dropped during the worst of the pandemic, but returned this spring as local benchmarks improved. Electric Darling will continue the series on April 30.

The in-person audience has now grown to about 50. Courtney said that they can seat around 100 while maintaining six feet of distance between patrons in the 750 seat auditorium, but that the challenge is the lobby and restroom areas.

Their popular Banff Film Festival is back this year after having sold out showings cancelled last year. For this year, they offered six nights with 75 seats each night and sold out in minutes. Chris Blue is performing in a private performance for the Boys and Girls Club soon, with a 60 person audience (plus streaming).

She said to expect announcements soon for full capacity shows this fall, starting around Labor Day. Several re-scheduled shows are currently listed, including the Allman-Betts Band on September 29 and Leanne Morgan in two shows on November 6.

The Theatre has also added a filtration system to their HVAC and touchless bathroom appliances.

As with the Bijou, I reached out to Assistant General Manager Mitch List, but did not hear from him in time for this article. I will update it as I have new information. Programming is listed for both the auditorium and the coliseum, including Aaron Lewis (May 7), Baby Shark Live (June 18), and the Nitro Comedy Tour, Theresa Caputo, and Jim Gaffigan, all scheduled for August.

Mill and Mine has started presenting live shows at a 15% capacity, with seating at separated tables (full table purchases only), instead of the standing-only arrangement the venue has previously employed. General Manager Margaret Stolfi explained that the shows won’t likely make money, but they felt it was important to take steps forward and reactivate the space.

The first show in the series, a concert with Cruz Contreras is sold out, as is one of the two June 26 concerts with Scott Miller. Other artists currently booked include Jerry Douglas, Molly Tuttle, Amythyst Kiah, and Bikini Kill. They hope to move to full capacity shows around September.

Margaret said they haven’t had a performance since February 2020 and she worries for venues if they are not able to book full capacity shows this fall. They have hosted some private events and they’ve resumed Drag Brunch using restaurant capacity guidelines. As with the Tennessee and Bijou Theatres, AC Entertainment/Live Nation does the booking and they are searching for bookings for the fall and winter. Margaret said she wants to wait to put full capacity show tickets on sale in order to avoid the postponements, cancellations and refunds with which all venues have had to contend during the pandemic.

She said she would rather open a bit late than to try to open too soon. She said most employees at both Mill and Mine and Tako Taco (the adjacent restaurant) are now vaccinated and that makes her feel better for their safety. For now, she says, they will continue watching Health Department metrics, CDC recommendations and local vaccination rates.

I spoke to Joshua Peterson, who said that River and Rail Theatre Company plans to present a four show season, starting in September. The group uses union actors and guidelines for their use in productions are being released. The building will reopen, he said, when local Knox County Health Department guidelines are green (they are currently two yellow and three green) and when the CDC says gatherings are acceptable.

They have booked the building for July rentals, though those are contingent on the above measures. The intent is for River and Rail to have a Christmas production and two productions in early 2022. They are offering limited capacity tickets for concerts and productions by other groups starting in mid October. Should restrictions be lifted, additional tickets will be offered for these shows. Tickets for Over the Rhyne are currently on sale for an October 16 show. Shows for Big Ears are also scheduled for 2022.