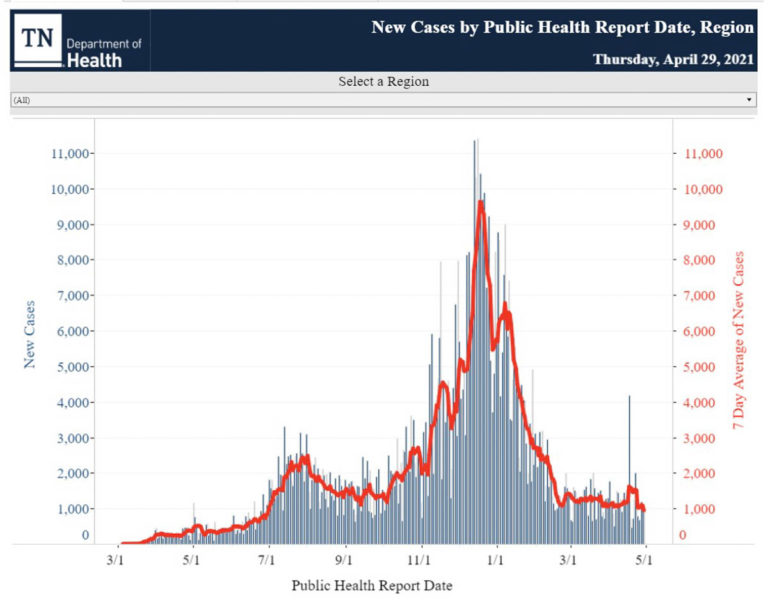 Even as it feels very much like we are on the mend from this global plague, there is no shortage of news. While Americans increasingly take their vaccinations and tentatively remove their masks, much of the world is unvaccinated and, in some cases, reeling from their worst impacts of the virus. From a selfish perspective, we need to help them control the spread lest it mutate beyond our vaccinations and we return to our previous status. From a humanitarian perspective, what is happening in Brazil, India and other places is heartbreaking.

Over 151.2 million people have been diagnosed with COVID-19 since the beginning of the pandemic last year. 128.7 million people have recovered, over 19.4 million remain ill, and 3.2 million people have died. About 5.8 million additional cases were diagnosed this week, or about 200,000 more than the week before. The current average rate for new cases is 829,052 per day, the highest the number has ever reached, and up about 27,000 per day over a week ago.

15,255 additional deaths were reported yesterday, up about 1,800 over the same day a week earlier. India has now surpassed Brazil in daily death totals and now leads the world. The high number of daily deaths in the country are likely to far surpass current levels, given the sustained high case rates. The countries leading the world in reported deaths for the day yesterday were India (3,501), Brazil (3,074), the U.S. (870), Turkey (339), and Germany (320). The numbers for both India and Brazil are about 50% higher than the previous week.

There should be one note made regarding the current tragic numbers being reported in India: While the numbers are the highest ever reported for a single country in the world, the country’s population is 1.4 billion, or over four times that of the United States. And though most experts feel India’s case and death numbers are vastly under-reported, the official per capita numbers compare favorably for the country. India currently ranks 116th in the world in per capita cases, up from 119th a week ago. It ranks 118th in per capita deaths, also up from 119th last week. If India’s crisis were to reach the proportions of the U.S., for example, almost 2.5 million people would die in that country alone.

The U.S. continues to lead the world in total COVID-19 cases with over 33 million reported, including over 450,000 in the past week. This does, however, represent a 15% decline in new cases from the previous week. Over 25.6 million Americans are considered recovered, just over 6.8 million people are currently infected, and 589.2 thousand have died.

The U.S. is currently averaging 54,675 new cases per day, down almost 10,000 cases per day from a week ago. The current seven-day average is the lowest the U.S. has experienced since October 14. The U.S. average for new cases has now declined for the last sixteen days.

The death rate in the U.S. continues to decline very slowly, with the current average for deaths at 719 per day, down from 730 per day a week earlier. 5,030 Americans died of COVID-19 over the last week.

While the U.S. continues to lead the world in cases (33 million), India is closing the gap (18.9 million) and seems likely to surpass the U.S. in coming weeks or months. Over the last seven days, India added over 2.5 million new cases compared to 383,000 in the U.S. The U.S. also continues to lead in deaths (589.2 thousand), but was that gap is also closing with India reporting over four times as many deaths (21.4 thousand) as the U.S. (5,000) in the last week and Brazil reporting over three times as many (17.7 thousand).

Ten states are reporting increases in the rate of infections over the last 14 days, down from eighteen a week ago. Five of those are reporting an increase of 10% or more in their rate, down from eleven a week ago, and those states are Oregon (38%), Arizona (27%), Washington (18%), Alabama (14%), and Wyoming (14%). Yesterday, eight states reported multiple thousands of new cases, down from eleven on the same day last week. Eighteen states (including Tennessee) reported at least 1,000 new cases, down from nineteen last week.

About 2.63 million vaccines were administered each day in the U.S. last week, about 22% lower than three weeks earlier. The number was 2.95 million per day last week. About 143.8 million people (43%) in the country have received at least one shot and about 99.7 million (30%) are fully vaccinated.

New Hampshire continues to hold the top spot for first vaccinations given (60%), with Massachusetts, Vermont, Connecticut, and Maine, rounding out the top five. Maine leads in those fully vaccinated (38%), with the top five rounded out by Connecticut, Vermont, New Mexico, and South Dakota. Tennessee is in a three-way tie with Wyoming, and Idaho for 45th in first shots (34%), with Louisiana, Alabama, and Mississippi ranking worst. Tennessee is tied with Georgia for 46th in those fully vaccinated (24%), while Utah, Mississippi, and Alabama rank at the bottom.

The Johnson and Johnson vaccine is back in use and the pause out of rare blood clotting concerns seems not to have dampened demand. Driven by COVID-19, excess deaths in the U.S. in 2020 were the highest on record, with deaths surging more last year (16%) than any other year. It surpassed 1918 (12%) and total deaths from COVID-19 will likely surpass total deaths from the Spanish Flu. The CDC this week released new guidance for outdoor masking, say essentially that if you are vaccinated, you do not have to wear a mask outside and if you are unvaccinated, the risk outdoors is still relatively low. Exceptions might include such situations as crowded outdoor concerts.

Yesterday, the state of Tennessee reported 1,092 new cases of COVID-19, bringing state totals to 699,419 confirmed cases and 147,053 probable cases. The state is now averaging 947 new cases per day, the lowest seven-day average reported by the state since June 28 (724). It is also about 600 fewer than one week ago, a number which was likely inflated by the discovery of thousands of historic cases which were added at that time.

Hospitalization levels, which dropped to their lowest rate this year in mid-March, then rose slowly for several weeks, seem to have stabilized in a range right around 800 since late March.  40 COVID-positive Tennesseans were admitted to the hospital yesterday, bringing the pandemic total to 21,137. There are currently 829 COVID-positive Tennesseans in the hospital, down 36 from a week ago. Of the 829, 243 are in ICUs and 129 are on ventilators, little changed from last week.

The state reported 17 COVID-19 deaths yesterday, bringing the total for the state to 12,188. The state is averaging 8 deaths per day, down from 10 a week ago. The current rate of deaths in the state is similar to last June.

The big news in the state this week was that Governor Lee ended all state restrictions regarding COVID-19, saying, “It’s time for celebrations, weddings and conventions and concerts and parades and proms and everything in between to happen without limits on gathering sizes or other arbitrary restrictions for those events.” The few metro counties governed by their own local Boards of Health were excepted from the order, though he encouraged them to end any restrictions or mandates by the end of May.

The Knox County Health Department reported 34 additional cases of COVID-19 today, bringing county totals to 43,073 confirmed cases and 8,500 probable cases. The county averaged 33 new cases per day over the last week, down from 36 recorded last week. 50,284 county cases are considered inactive, while 656 currently test positive for the virus, a decrease of nearly 120 from the same day last week.

There are currently 32 COVID-positive Knox County residents in the hospital, up two from last week, but one fewer than the week before. Hospitalization levels increased to the mid-40s during the week before settling back to about the level they’ve held for the last seven weeks. 1,392 Knox County residents have been hospitalized with the virus at some point during the pandemic.

One additional COVID-19 death was reported in the county today, bringing the total to 633. Six deaths from the virus were reported this week, up from half that number last week. Of the six reported this week, one person was between the ages of 18-44, two were between 45-64, and three were 75+.

The Knox County Health Department updated its metrics and the only change was in shifting the death rate from yellow to green, leaving all metrics green, with exception of testing, which is rated yellow due to the low current levels. The metric for deaths was likely set before the bulk of this week’s reported deaths, including four reported on Wednesday. For another way to measure where Knox County stands, see the New York Times page for our county. By their measure, our risk level remains extremely high for the risk of COVID exposure, though their metrics show it improving.

Active case numbers in the Knox County Schools and now number 56, up just one from last week. All schools are offering in-person instruction. The University of Tennessee is reporting just 14 total active cases among students, with no positive cases among staff members.

The most significant COVID-related news this week came on the heels of the governor’s removal of state restrictions and guidance. The same afternoon the governor made the announcement, Mayor Jacobs announced that all Knox County restrictions would end at midnight that night. It is very unclear that he had the authority to do so, as our local law department had previously ruled that only Dr. Buchanan could make that change and the governor’s announcement did not thing to remove that authority.

Confusion ensued, with businesses left to determine for themselves if they would restrict seating or require masks. Dr. Buchanan made it clear she feels masking should continue. A hastily called Board of Education meeting earlier this morning ended with a rejection of the agenda (the vote was a tie, so it was not accepted), which was to end the mask mandate in schools. The matter will likely be revisited at next week’s regular board meeting.