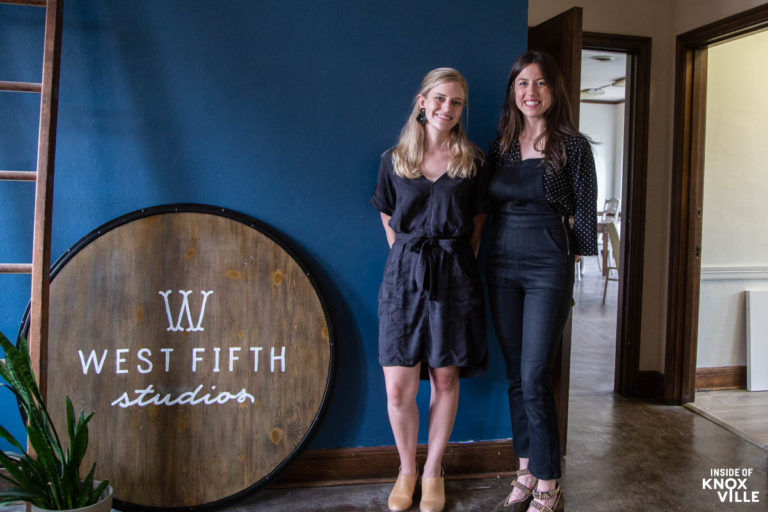 Two local artists, Gabrielle Barnhart, and Kate Turnbull have teamed to provide private studio space for other artists. The collection of studios at 211 West Fifth Avenue is situated primarily on the 3rd floor of the annex behind the First Christian Church building, which is currently in use by The Point Knox church. The two sublease the space for the West Fifth Studios, providing seven studios hosting nine artists, with a common space provided for gathering and relaxing.

Kate, originally from Knoxville, graduated from Bearden High School and attended the University of Tennessee, where she obtained a BFA in painting. She said she’d always been into fine arts but considered teaching as a practical option. She said as she graduated, she felt such a connection to being a maker that she chose to do design work to make a living, instead of teaching.

She worked several places, ultimately working at Robin Easter Design for the last two-and-a-half years. She says she loves working there and hopes to do so for many years. While working professionally in design, she also maintained a studio at 17th Street Studios, eventually becoming director there for a year. She met Gabrielle last July through Gabrielle’s brother.

Gabrielle is also from Bearden and attended UT, though the two didn’t overlap in their time there. Her degree from UT is in printmaking, an artform she continues to pursue. After graduation, she got married and moved to Seattle, where she taught various art classes, including working for the city providing art classes for adults.

She and her husband visited Knoxville in July of 2020, which is when she met Kate. The two moved back to Knoxville in October when her job was terminated, and he was working virtually. Her husband began work for LeMond Bicycles and she took studio space at 17th Street Studios. She had always dreamed of operating a business offering artist spaces and she and Kate began discussing the possibility.

When the location behind the former First Christian Church was offered, it felt like the perfect spot. Gabrielle worked full time getting the space ready before starting her new job at Arrowmont School of Arts and Crafts. The two said the church and pastor Adam Woldt have been incredibly supportive landlords, and after some work getting the studios ready, all seven were filled immediately when they opened in February. Nine artists work with a range of mediums including photography, painting, printmaking, and ceramics. They have a waiting list as they consider how they might expand.

Kate said they had worried they would not be able to fill the studios, but ultimately had to turn artists away. She said they hope they can extend their renovations in the building and offer more studio space by this summer. They both said it is a labor of love as they have a passion for helping artists. They have applied for a Bailey grant, with hopes of purchasing a kiln.

For now, they are excited to be in their new neighborhood and have been welcomed graciously by the nearby businesses. They plan to host a range of events at the studios as they get underway. They will host a First Friday event a week from today. The nine artists will share their work in the church courtyard off Fifth Avenue. They hope to host more events, including open studio events in the future.