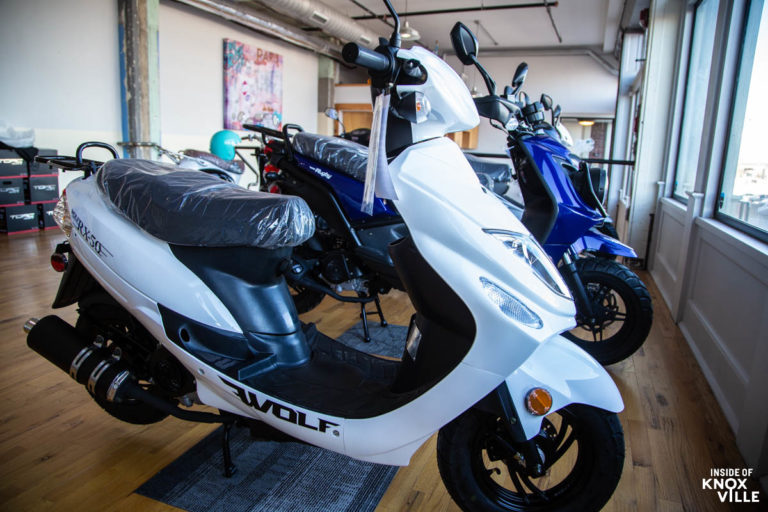 When the pandemic passes and area residents and tourist stream once more into downtown, they are going to have a lot of catching up to do. Businesses continue to open and expand, continuing the downtown boom of the last fifteen years as if nothing is amiss. Mario Aleksic and his partner, Zoran Kvrgic (no relation to the barber, though they are both Serbian), will open Java Racer March 15 at 304 West Jackson Avenue, selling Wolf brand mopeds.

I asked Mario to explain the name of the business, particularly the coffee reference. He explained that he is from Vienna, Austria, the coffee capitol of the world, so it was a connection to home. He also loves coffee shops and noted that Knoxville has many great ones. He said it fits the image of hopping on a bike and heading to a coffee shop, explaining that anyone can enjoy a coffee shop, and anyone can enjoy a moped.

Mario comes from a family of entrepreneurs who owned businesses in Vienna before moving the family to Orlando, Florida when he was sixteen. He said he has worked for others and he has created jobs for others over the years and he values each. He remained in Orlando and worked a career in the financial industry before having a heart attack three years ago. He made the decision to “phase out the 9 to 5 corporate life,” and began looking for a smaller city to which he and his family might move.

When the family visited east Tennessee, they fell in love and decided this was the place. The family enjoys the outdoors and they rapidly made friends. He said he feels as if he has found his “soul-state.” He particularly loves downtown which reminds him of growing up in Vienna in the sense that people are out, walking around and it is a place with history. He pointed outside to the cobble stones and said that reminded him of home, as well as the shops, bars, and ice cream shops. He also says the city feels very safe and that was a selling point.

The family moved here in 2019 with little idea what would happen next. He remembers walking past Jackson Avenue as the ramps were under construction and saying what a nice spot for a business that would be. He had no idea at the time what business he would start, and his family thought he was crazy.

Over the next year, he explored ideas and then the industry upon which he settled. He also explored the city in detail and said its layout and determined it to be “the perfect moped city.” The moped, he said, is perfect for “micro-mobility.” The shop on Jackson is intended to be a starting point. He plans to grow the business and will likely search for industrial space to store more inventory, and he intends to open more shops here and in other cities. He plans for Knoxville to be the hub of the business.

While the original mopeds, he explained, were motorized bikes with pedals, over the years, the name has been generalized to mean any small, motorized bikes. Most of the bikes he sells will have 49cc engines which, in most states, doesn’t require a special license for already licensed drivers. The bikes will reach 35 to 40 mph and are legal on the streets.

The engines are amazingly simple, he said, and with little more than a regular oil change, should be largely maintenance-free. He said the company has been perfecting them for nearly fifteen years and the current 49cc engine gets about 100 mpg. He said he sees it as a perfect second vehicle for downtown residents or for college students to get around campus.

He is excited to offer quality mopeds at reasonable price points compared to Italian models, for example. He does have some models with bigger engines, and he is looking to expand into electric bikes. He also said he’s gotten interest from people who are older and are ready to give up larger motorcycles, but still want to enjoy the thrill of riding.

The shop will also sell accessories, including branded t-shirts, helmets, gloves, and other safety gear. The bikes have a small amount of storage and a hook for hanging a bag (he sometimes runs to the grocery store on his). For additional storage, he will be selling mountable trunks. Insurance on the bike runs about $100 per year. They also have USB ports for plugging in your phone or other devices.

The shop will offer a range of styles to fit the customers. He describes the Islander as “retro,” the Blaze as a “street bike,” for example, and says there is something for everyone, including larger sizes for larger people. He is awaiting more inventory which should arrive before opening and he can get most models within a week if he doesn’t have it in stock.

Most of all, he says he wants the process of shopping for a bike to be fun and laid back. Mario says you need not worry about a high-pressure sales pitch. He encourages people to come in and have fun deciding what they like. For now, the bikes are for purchase only, though he said he may consider rentals in a year or so, though not likely from the current location.

He acknowledged it was a bit strange launching a business during a pandemic, but said the year gave him time to be completely ready. And he is. Check out the shop starting March 15 and welcome Mario to the city. The shop will be open M-F 10:00am to 5:00pm and Saturday 10:00am to 2:00pm. They will be closed on Sunday.