COVID-19: The Review by Month or Are Things Really That Much Better? 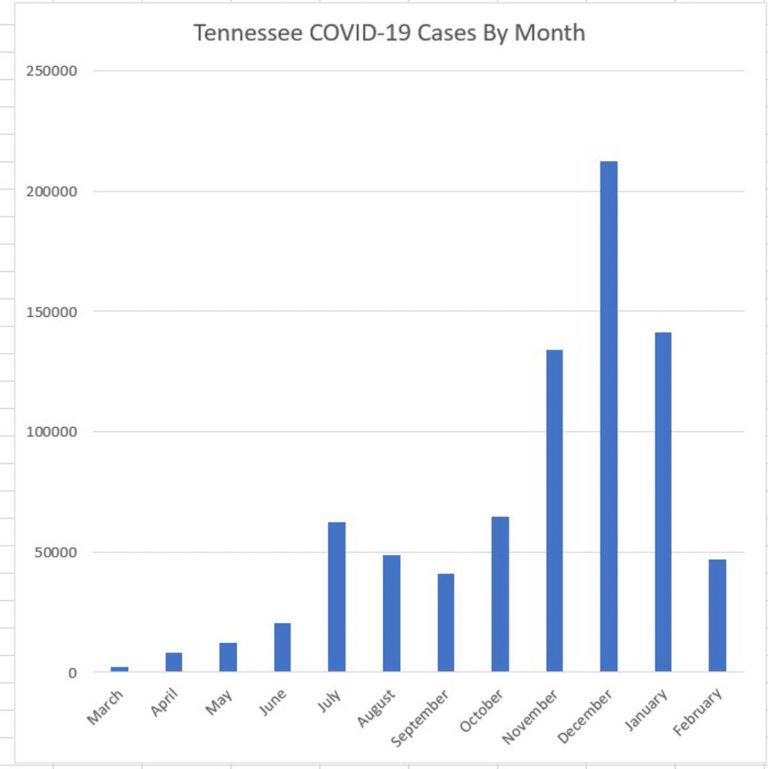 As requested by readers many months ago, now, this article is a look at monthly data to see bigger trends that is possible looking at the daily minutia. To dispense quickly with the above question: yes. Cases, deaths, hospitalization, and test positivity rates are all sinking. Or at least they were through the month.

There’s some question about what may be happening at the moment, but we can really celebrate the month of February. Just celebrate it for what it is: a much better month than the previous two or three. We are not to the point of celebrating the ultimate demise of the virus. We can hope for that celebration to come soon. For now, levels are much better, but still high.

Starting with monthly case numbers at the state level, the state reported 47,143 cases for the month of February, or almost precisely a third as many cases as the previous month (141,059). It’s almost a quarter the number from the month of December (212,309). It is a stunning and unexpected shift. Yes, part of the explanation is a reduction in testing. The fact that the lower case numbers are also accompanied by lower numbers of hospitalizations and deaths, plus a plummeting positive test rate, is pretty undeniable.

Even more shocking, the case rate has not simply dropped below January and February, it is also lower than the case numbers the state tabulated in November, October, August, and July. It most closely resembles August, which is instructive, as many of us were extremely concerned in August. While the trajectories were in different directions at the time, it is a reminder that cases can leap from this level. Additionally, the average number of daily cases was rising slightly the last week of the month, so that is cause for caution, as well.

Deaths in the state didn’t fall quite as far, quite as quickly. As deaths follow new cases by several weeks, December’s record case totals foreordained January’s record death totals. February’s decline in numbers of deaths only looks small by comparison to the rapid decline in cases. Taken alone, a 36% decline in deaths from COVID-19 in one is remarkable.

Further, there are very strong reasons the downward trend in deaths will continue. First, while there has been a small uptick in cases in recent days, cases levels are far below where they were at the beginning of last month. The full impact of the decline in cases still hasn’t been seen in deaths, but logically, it will come. Also, the reduction in hospitalizations in the state indicates far fewer will be dying in the next few weeks.

Perhaps the most compelling case for an extension, and perhaps escalation, of the death rate is the increasing pace of vaccinations. Particularly, the fact that early vaccinations have gone disproportionately to those most susceptible to death from the virus, is reassuring. The death rate is still high and could even rise, but we are in a good place if we continue to be careful.

Local trends largely parallel state trends, with sharp drops in cases, deaths, hospitalizations, and positive test rates. From December to January, confirmed cases in Knox County dropped by 43%. Further, they dropped an additional 59% from January to February. The trajectory over the last two weeks and over the last week suggests the downward trend continues.

As shocking as the last three-month comparison is the fact that Knox County had fewer confirmed cases in February than in any month since June 2021. Granted, February’s case count was far above last June, but that it is our lowest in eight months illustrates how relatively low it dropped.

The death rate, which was almost even from December to January, fell by 61% this month. It continues to fall, with 36 coming in the first half of the month and 23 in the second half, meaning March has the potential to be even lower. The month ended with two consecutive daily reports of zero deaths. The last time that happened was over four months ago.

So, does this mean we are all done here? Time to gather in large crowds, rip our masks off our faces and party? Please understand that the answer is “no.” We may have another spike. Hopefully it won’t be as bad as the last one. People continue to get sick and die. We do not know what impact the more recent variants may have on our case numbers and mortality rates. The vaccines are effective, but not perfect.

I think that whatever happened in the first week of January — and to be clear, it happened all over the world — may have signaled the beginning of the end of the worst of it. Taking that mystery ingredient and adding an increasing vaccination rate, combined with persistent masking and distancing could transform our summer or fall. If the monthly report is this good a month from now, I’m going to feel pretty good about our prospects.

But we must stick with the behaviors we’ve been implored to employ. Someone will be the last person to die before the end of the pandemic is officially declared. If that someone is someone you love, it will not matter that the pandemic was almost over. Mask up, distance, and follow the other recommendations for just a bit longer. We are almost there.