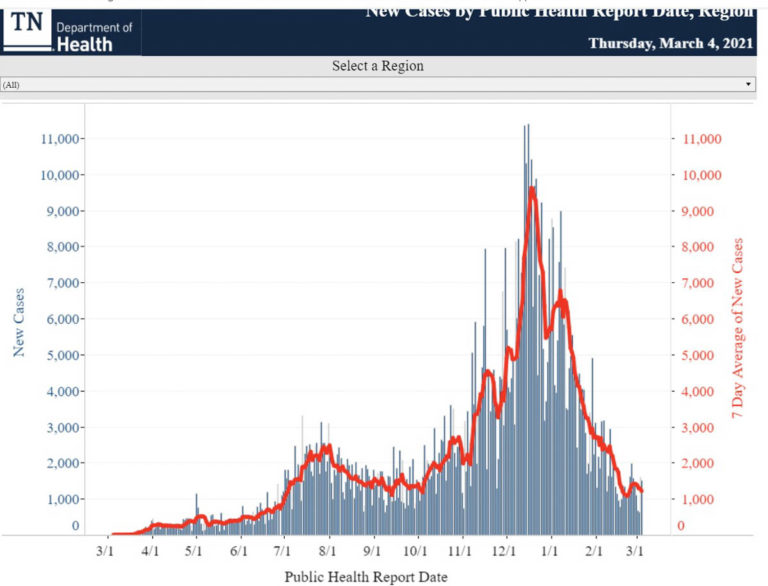 Happy weekend, everyone. I hope you do something special or fun in the sunshine. We should be seeing shoots of green, soon. Last spring was beautiful and this one is filled with far more hopefulness. I think it will make every small wonder sparkle just a little bit more.

The uptick in the number of tests continues at the state level, producing higher daily case counts than we’d seen for a while. Yesterday, the state reported 1,514 new cases, bringing state totals to 652,083 confirmed cases and 127,366 probable cases. 754,465 cases are considered inactive, while 13,483 Tennesseans have active cases of the virus. Active case levels are like those in September. Over the last seven days, the state has averaged 1,215 new cases per day.

An additional 63 COVID-positive Tennesseans were reported as admitted to the hospital yesterday, bringing the pandemic totals there to 18,742. The total number currently hospitalized dropped by almost 30 to 865. The number in ICUs rose slightly to 254, while the number on ventilators dropped by one to 131.

42 additional deaths were reported in the state, bringing the state death toll from the virus to 11,501. The average number of COVID-19 deaths in the state over the last seven days was 25.

The state reported test results from 17,761 tests yesterday, a couple of thousand fewer than yesterday, but toward the upper end of average for recent weeks. The biggest news there was that the low positive test rate. At 4.67%, it is lower than it has been in many months and is below the generally accepted cutoff for an adequate testing program. Johns Hopkins University pegs the state’s seven-day average at 8.7%.

The state continues to vaccinate roughly 250,000 people every seven days, or around 35,000 per day. The current numbers from the state indicate 1,520,775 shots have been given to Tennessee residents, including 247,132 over the last seven days. 13.6% of Tennesseans have gotten at least one shot, and 534,804 Tennesseans are fully vaccinated.

At the current rate of vaccinations, 100% of Tennessee residents would be vaccinated in the next 344 days, or by February 12, 2022.

The Knox County Health department is reporting an additional 64 cases of COVID-19 for the day. County totals have risen to 40,158 confirmed cases and 7,202 probable cases. 45,609 cases are considered inactive, while 1,208 Knox County residents are currently COVID-positive.

1,270 people have been hospitalized from the virus since the beginning of the pandemic, with the current number remaining unchanged from yesterday’s 40. It is the lowest number of currently hospitalized COVID-positive Knox County residents since October 2 (39).

Two additional COVID-19 deaths were reported today, bringing the county total to 543. One of the people who died was between the ages of 65 and 74, while the other was 75 or older.

The state is reporting a 12.2% positive test rate for the county, up from the 9.1% reported the day before.

County vaccination numbers were updated to indicate 108,858 total shots have been given. (Ed. note, I have at times incorrectly reported this number as the number of residents who had been vaccinated.) 69,473 Knox County residents have gotten their first shot only, while 39,056 are completely vaccinated. 14.77% of the county’s population have gotten at least one shot.

The Knox County School system is reporting 74 active cases of COVID-19, up six from the day before, the second consecutive day of increases. 3,347 students and staff have recovered from the virus, while 934 remain in quarantine or isolation, up by 64 from the previous day.  The isolation/quarantine number is the highest it has been since February 22, and currently includes 846 students and 88 staff members.

The metrics remain unchanged from yesterday: Teacher and student attendance, cafeteria and bus support are all rated green, while custodial support and substitute availability are rated yellow. There has, however, been one school closed to in-person learning since yesterday:

The number of active cases reported by the University of Tennessee continues to drop. The University is reporting 40 active cases today, down three from the day before, but down by 50% from less than two weeks earlier. 2,956 students and staff are listed as recovered, while just two new cases were identified.

Chancellor Plowman of UTK gave her Friday update. She announced that Dr. Gregg and Brian Garr were given the inaugural Volunteer Spirit Award for their work to keep students and staff safe during the pandemic.

Dr. Gregg spoke from the Student Union Building where he said they have administered about 300 vaccines so far today. He said they will, along with everyone else, will begin including those in category 1C. He said they hope to have the J&J vaccine soon and are happy to get it. They will continue to vaccinate the public until students leave for the summer.

She said the most recent cluster, at the Sigma Kappa House, resulted from 2 positive cases and 32 close contacts.