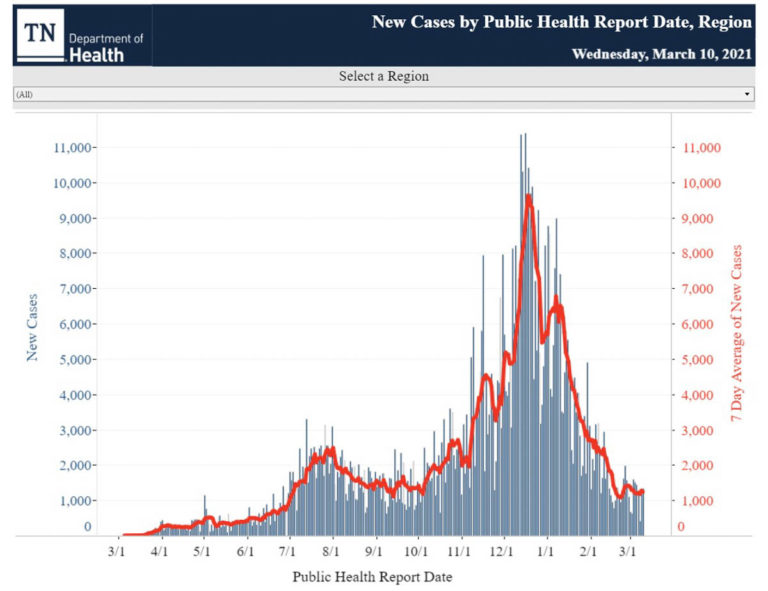 A year ago, today I made my first mention of COVID-19 on this blog. I wrote about the city council meeting in which Dr. Buchanan (it was also the first time I’d ever mentioned her) spoke to the council about the potential threat. There were no cases reported in Knox County at that time, but she said she expected it to arrive soon. I also bumped in to Ashley Capps that night and he implied that Big Ears was doubtful and by the next afternoon, it was canceled.

The Big Ears news was huge. It was the first time I realized how big an impact we were about to experience. I published both articles on the same day, with no idea that rare exception would become my norm for a year. I published a couple of non-COVID articles for the next two days, but on March 16 of last year I wrote my first full article on the virus. I think it has held up pretty well. Within days I began the daily reports.

That it has been a long year, I think we all agree. That some light has entered the picture, I think we can all celebrate.

An additional 48 COVID-positive Tennesseans were admitted to hospitals in the state yesterday, bringing the pandemic total to 18,955 Tennesseans who were hospitalized with the virus at some point. Hospitalization numbers continued their decline with twenty fewer hospitalizations than the previous day, at 701. ICU numbers remained the same at 205, and the number of ventilated COVID-positive patients increased by five to 122.

19,614 tests were reported yesterday, relatively in line with post-holiday testing levels. Just over 6.9 million tests have been administered since the beginning of the pandemic. The state reported an impressive 5.19% positive test result rate for the group. Johns Hopkins University is reporting an 8.1% positive test rate average for the last seven days in the state.

1,743,392 vaccination shots have been given in the state, including 233,547 over the last seven days, roughly in the low end of the range where we’ve stay for over two weeks. 15.34% of state residents have gotten at least one shot, while 618,651 are fully vaccinated, an increase of about 17,000 from the day before. In the most recent update, the New York times reports Tennessee is in a three-way tie for 47th in administering the first shot and it has the 48th best completion rate in the U.S. out of the 50 states.

The Knox County Health Department reported 60 additional cases of COVID-19, bringing county totals to 40,510 confirmed cases and 7,371 probable cases. 46,225 inactive cases are reported, along with 1,063 active cases, up 32 from yesterday. 40 COVID-positive Knox County residents are currently in the hospital, bringing the county pandemic total to 1,283 who have been hospitalized at some time. The current 40 reflects an increase of one over yesterday.

Two additional deaths from the virus were reported today, but 46 deaths were added to the county’s totals. The other 44 deaths were reported by the state in December, January, or February, but were not included in county totals at the time. As a result, it is impossible to determine from the KCHD website the ages of those who died today. For the pandemic, the age breakdown of those who have died is 18-44 (10), 45-64 (80), 65-74 (139), and 75+ (364).

Charity Menefee led today’s meeting encouraging people to stay nearby for the upcoming spring break. She clarified that 44 deaths in Knox County which occurred in Knox County in the last three months and was reported at the state level, but not at the local level, so they have been added with today’s numbers. A similar discovery recently happened in Davidson County.

She said the Broadway site will open tomorrow, they expect supplies of vaccines to increase in coming weeks and remain optimistic regarding the possibilities in coming weeks. She also expressed encouragement at the declining hospital rates. She pleaded with everyone to continue practicing the five core actions.

Metrics for the school system remained unchanged, with staff and student attendance, cafeteria and bus support all rated green and custodial and substitute availability rated yellow. Four schools are currently on virtual-only learning, though only one, Maynard Elementary is in that position due to COVID-19.

There were no additional clusters reported today.