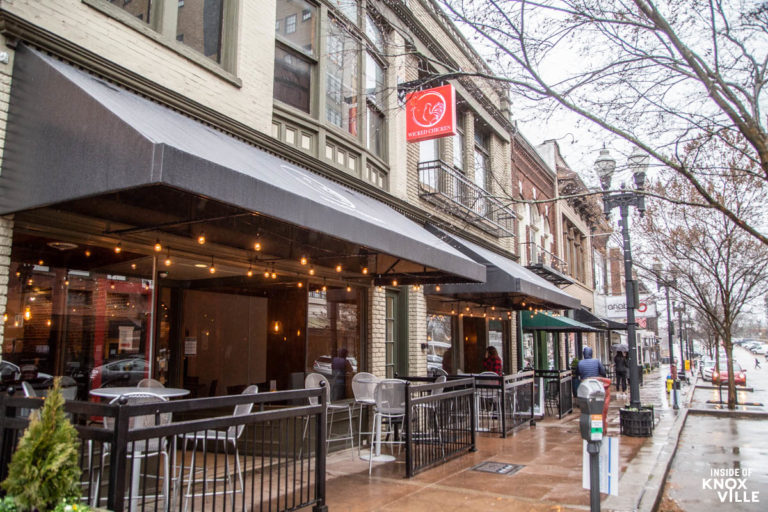 More recently, Cru Bistro on the 100 block of Gay Street, whose sister restaurant in Turkey Creek had closed a year earlier, shifted its concept and became Wicked Chicken. The restaurant had been relatively the same since its opening ten years ago and the owners felt it was a time for a refresh and a new menu direction.

The ownership group, which also owns the Nama locations, made the shift in January, retaining staff, but moving in a direction they felt to be more in line with the interests of the young professionals living on and frequenting the 100 block of Gay Street. The process was not a quick one. I spoke to Director of Operations, Josh James, who laid out the details of the change.

He said, “Cru was a great brand for a long time,” but a shift made sense at the decade point. The group noticed that, while there are restaurants serving hot chicken, there are no restaurants in Knoxville devoted to the Nashville hot chicken which has become so legendary in that city, starting with Prince’s Hot Chicken. Some like it hot and the founder of that venerable Nashville institution was no exception.

While Prince’s Hot Chicken has been around for a hundred years, the craze for hot chicken has recently spread farther afield. Josh said his team traveled to a number of hot chicken restaurants to see what seemed to be attracting such attention. Six months went into developing their own recipe for the chicken and the rest of the menu to go along with it. The essentials of the menu are chicken, sides and chicken sandwich.

The fun comes in when choosing just how adventurous you feel. You can select mild, medium, or hot, of course. Or you can up the ante to “wicked hot” or “wicked clucking hot.” Josh said he suggests that most people start with medium and decide their direction from there. He said a number of people have tried the hottest levels, however, and say that more than heat, the flavor continues to come through.

A few cosmetic changes have taken place at the location, though you’ll recognize the same basic infrastructure that was there with Cru. The awnings and signage have been changed outside and the walls have been painted. The floors were re-finished, walls painted and the lighting was changed. Servers have a contactless point of sale system they bring to the table in keeping with the times and the need to keep space and limit contact.

The restaurant also offers online ordering through the website and they have recently added delivery service, which will soon include local start-up LoCo Knox. Josh said that Executive Chef  Geoff Kenney and the team have take the same care at the new restaurant as customers have come to expect at Nama. He would love to have you stop by, call-in or order some chicken for delivery, whether you like it mild or wicked clucking hot.