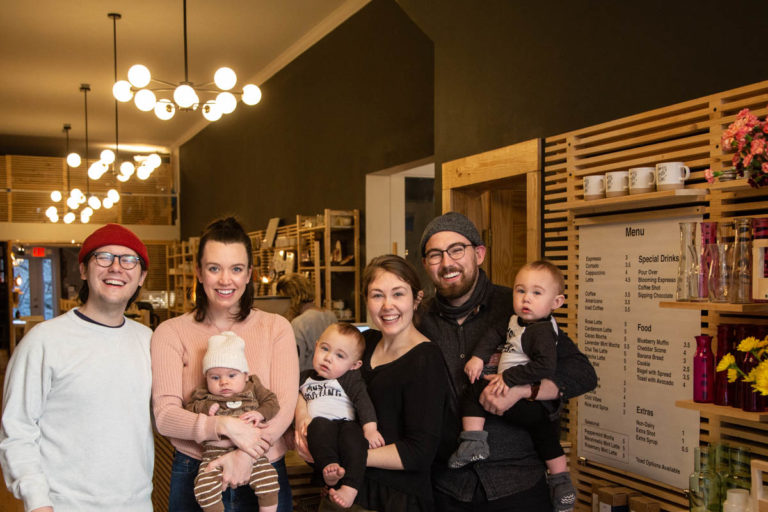 Two years ago, this month Jacks opened at 133 South Gay Street (See this original article for profiles of Logan and Katherine.). The eclectic shop owned by Logan and Katherine Higgins spotlighted local makers, including the owners themselves. The business has been evolving since and has now entered an exciting expansion and has announced a new, much larger, location will soon be open at 854 N. Central Street, former home of The Hive.

The business has also introduced additional ownership as Mark and Kendell Lily, formerly operating a separate coffee business at the same location, have joined forces as co-owners as of January 2021. The new structure makes the business more streamlined and allows for easier replication as the business expands.

Mark said that he and Kendell were invited to bring their coffee business (Highline) to the grand opening and began coming on regular basis before setting up a permanent coffee bar. As the two couples became friends, it became apparent that operating two businesses under one roof was more complicated than necessary.

Kendell and Mark met while working at Tomato Head and Mahasti Vafaie (co-owner of Tomato Head) catered their wedding. He’s proud to have Flour Head pastries now offered in the shop to complement the coffee. He hopes to add soups and sandwiches at the new location.

Mark grew up in Knoxville, living in Fountain City, and after high school attended college for a while, and tried various jobs, but was ultimately drawn to coffee. A musician, he said making coffee offers a similar creative thrill for him, in that you create something for someone and get to see the pleasure it gives them. He worked at Starbucks and began learning about coffee. He later worked at Coffee and Chocolate.

Kendell is from Arkansas and lived in Colorado after high school. A 2014 visit to her sister’s home in Knoxville convinced her this was the place she wanted to live, and so she moved. She worked at Planet Fitness for a bit and then at Tomato Head from 2016 until the beginning of the pandemic. She now works for Knox County.

She says she has always grown plants and has been attracted to unusual, hard to find varieties. She’s taken favorite plants across the country with her as she’s moved. She and Mark recently bought a home, and she hopes to build a small green house, but for now, their son’s room is full of plants while he sleeps in a bassinette in his parents’ room.

Mark and Kendell met in 2016 and they started Highline Coffee in 2018. “Wherever I worked I felt like ‘I could do this, too.'” It started as a slow coffee business, featuring pour-over cups served from a cart which he built himself (with welding from a friend). They pulled the cart around behind their Honda Accord while working at food parks and LMU Law school. They built a second cart to expand the business and purchased a Decent Espresso machine.

As 2019 progressed, they were setting up several days a week at Jacks and had hired employees to cover the location. They began to notice that, with the carts they were always chasing business, but at Jacks they were building a customer base. It made more sense to have one location.

The couples said the last year has been difficult and the business has suffered as a result of the pandemic and fewer people coming downtown. As they considered their next move, the couples felt the slower business offered an opportunity to use the extra time to move forward with their bold plans. They said they have faith with the vaccine coming that business will return and they wanted to be ready to take advantage when it happens.

They have been looking for ways to trim expenses and the merger was part of that. They had their eye on the extra space long before the pandemic hit and the new location has been in the works for a long time, as well. They also knew the two spaces would not remain available and they would lose them if they waited.

Logan said the word “Jacks” has a lot of meanings, but the group considers themselves to be Jacks of All Trades and they want that eclectic attitude to be embodied in the range of products presented. Mark added that they each offer their own strengths, with Logan’s design background, Mark’s coffee expertise, Kendell’s love of plants, and Katherine’s bath and body products.

The business has added new shelving that allows for an expanded product line. An emphasis on sustainable products has grown over the two years and the coffee element has become integrated to the concept. The business took over an adjacent space at the address when it became available and added seating to allow for more of a coffee shop atmosphere on one side. A patio attached to the back of the address will offer lush outdoor seating when good weather returns.

Whereas potted plants were previously offered, now the business offers a propagation wall with cuttings and water or soil-based containers for growing your own plants. Another wall has cut flowers for building your own bouquet. The cuttings and flowers are all grown by Kendell.

Additional new products include plastic substitute products, like toothbrushes made from bamboo, reusable Q tips and other biodegradable products. Katherine has begun making a line of bath products, including hand soap containers that can be refilled at the store. A range of local and regional makers have their products in the store.

The expanded store is open now, but will have a Grand Opening tomorrow as a part of First Friday. Look for more information about the second location soon.