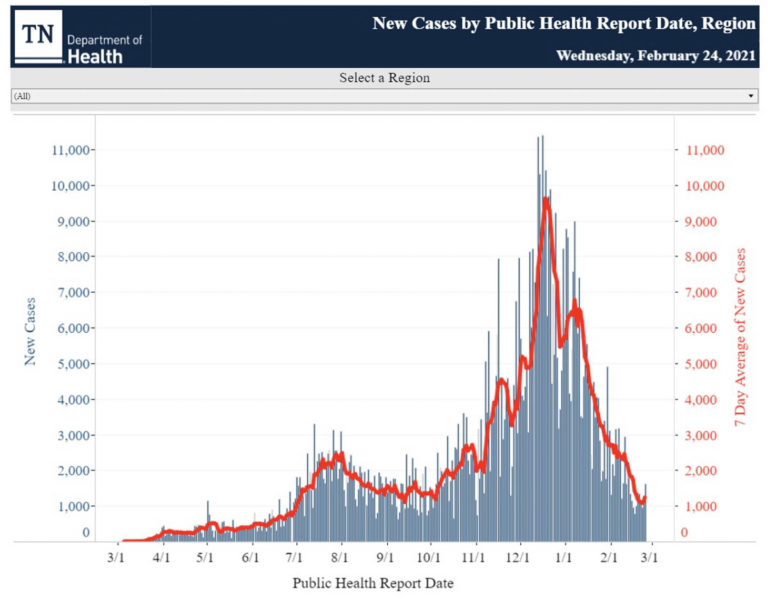 Two beautiful days to grab and enjoy before the monsoons set it. I hope you got your vitamin D. It does feel as if spring is trying to happen and that, combined with the drastically improving COVID numbers in recent weeks is enough reason to celebrate. Still there are worries. If you are a glass half-empty sort, I give you this L.A. Times article to support your worries. If you are the more optimistic variety among us, you’ll like this piece from the Atlantic. Read both, be optimistic but careful and keep watching the data.

The state of Tennessee reported 1,631 new cases yesterday, with totals now at 645,002 confirmed and 123,944 probable cases. 743,254 cases are considered inactive, while active cases in the state now number 14,426, the lowest reported since October 4 (14,229). For the last seven days, the average number of new cases in the state is 1,235. If there is a slight note of caution in these numbers, it is that this average has risen for two consecutive days.

Deaths have edged higher once more in recent days, with 68 reported yesterday, bringing the pandemic total to 11,266 in the state. The seven-day average for deaths in the state has now risen to 40 per day after dropping to 24 just six days earlier. It remains much improved, however, from the high of 135 reached earlier this month. The increase is a reminder that the fight continues.

The state reported 15,755 tests yesterday, slightly higher than many recent days, but still a third or less of the pre-holiday rate. The positive test rate continues to be maintained its improvement and was listed at 7.38% for the day. Johns Hopkins University calculates the seven-day average positive test rate for the state at 11.1%, the same as the day before.

The state page reporting vaccination numbers has some strangeness about it – or I don’t understand what they are doing. Yesterday the site reported a bit over 12,000 shots for the day (which I reported here). I checked last night, and it had been updated to report over 30,000 tests. Good news. But then this morning it updated again to read a bit over 15,000.

Are they updating more than once a day? I know I saw what I saw because the total number of shots given rose by about 35,000, far more the 15,000 shown, but less than if the two were added together. So, I have no idea. The good news is that weekly totals are increasing to close to the level they reached before the ice storms, though still not where we need to be. For my calculations regarding full vaccination of the state, I am relying on weekly totals, so that should smooth out issues related to daily totals.

At the current rate of vaccinations, the entire state would be inoculated in the next 634 days, or by November 24, 2022.

The Knox County Health Department is reporting 52 new cases of COVID-19, bringing county totals to 39,595 confirmed cases and 6,887 probable cases. 44,487 cases are considered inactive, and 1,464 Knox County residents currently have active cases of the virus, up almost 100 from yesterday.

One additional death from the virus was reported today. The person who died was between the ages of 65 and 74.

Benchmarks have been updated for the county and were covered in the Board of Health article this morning.

Charity Menefee began the briefing by thanking the many volunteers who have assisted with vaccination clinics. She also noted that many people have dropped off food for volunteers.

She addressed the wait list, calling it a “living list.” She said there are over 19,500 people currently on the list and they will be scheduled in the order they were placed on the list. She said text messages and calls are being used to schedule appointments and that people need to respond or they will be skipped. She urged people on this list to contact the health department if they are successful in getting a vaccine elsewhere. She asked for everyone to do the same for other providers if they are on other lists.

She emphasized that this is simply the Knox County wait list, though providers may at times reach out to schedule from this list if they have extra vaccine. She said they are encouraged that more access points are now available, and they anticipate an increase in vaccine doses available.

She confirmed the above numbers and reviewed benchmarks. Cases are now averaging 92 over the last two weeks, and 67 over the last week, which is one of the lowest numbers seen in the county in a long time. She noted the lower number of tests and encouraged people to get tested if they have been exposed. She said the reduced vaccinations last week might simply reflect incomplete data. (Ed. note: State vaccination levels dropped due to delayed shipments because of the winter storm. I would speculate this was more responsible.)

The number of active cases reported by the Knox County School system dropped by seven to 90. The number continues the string of much improved active cases numbers reported by the system and includes 66 students and 24 staff members. 3,267 have recovered, while 850 are in isolation or quarantine. The number includes 772 students and 78 staff members. While the number increased by near 100 overnight, it remains toward the low end of isolations and quarantines reported during the school year.

Teacher and student attendance, bus service and cafeteria support continue to be rated green, while custodial support maintains its yellow rating. Substitute availability which has been rated red for most of the year, but had recently had a multi-day run at yellow, was dropped back to red. All schools are currently offering in-person instruction.

The University of Tennessee is reporting 87 active cases, up four from the previous day and up for two consecutive days. The number remains in the approximate range it has remained for nearly three weeks. 2,871 students and staff have recovered, and 11 new cases were reported for the day.

404 students and staff are in isolation or quarantine, a number that has trailed upward and now is at its highest point of the semester, roughly equivalent to December 2 totals. Of the 404, 40 are staff members, 240 are residential students, and 124 are non-residential students. No additional clusters have been identified.