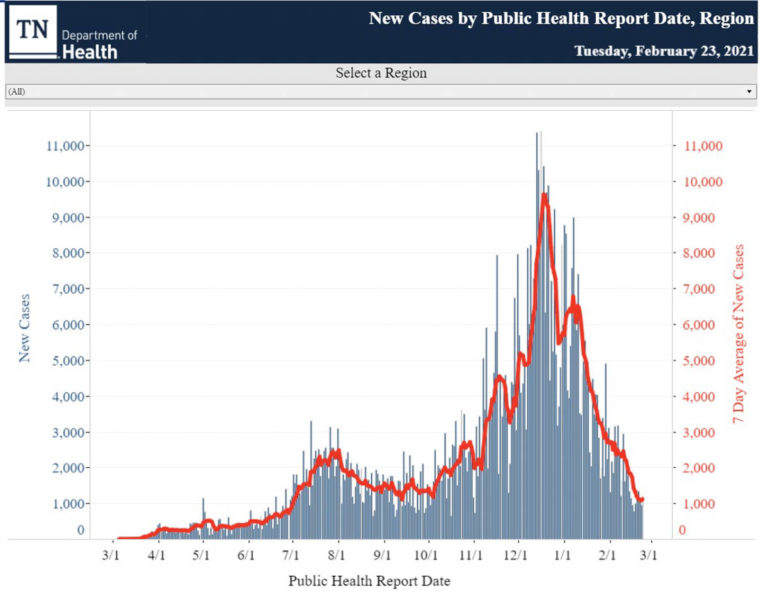 “You haven’t taken me to Europe.” So began our first conversation this morning. The five-year-old seemed unhappy about that fact. We’ve talked about maps, continents, countries, and cities over the last several months. We have talked about planets, especially Mars, we’ve talked about the solar system and beyond, and we’ve watched for the International Space Station to fly overhead. We’ve been pleased with what he’s learned. When I replied we have not been to Europe since he was born, his eyes grew large. “So, you have been to another planet!” Back to the maps we go.

27 additional COVID-positive Tennesseans were admitted to hospitals yesterday, bringing that total to 18,311 since the beginning of the pandemic. The number of current hospital patients increased by almost 40 to 998. 272 are currently in ICUs and 151 are on ventilators.

The state reported 45 additional COVID-19 deaths for the day, bringing the total to 11,198 who have died since the beginning of the pandemic. The seven-day average for deaths dropped by three from the previous day, to 28. Current death rates are similar to mid-to-late October.

Tests reported yesterday totaled 12,245, edging state totals closer to 6.7 million tests given. The positive test rate continues to be outside desired levels, but much, much closer than the state has been in months, at 7.46%. Johns Hopkins University has the seven-day average for the state at 11.5%.

State vaccination rates continue to be disappointing and inadequate. The state reports 1,165,626 vaccinations have been given, including 12,738 the day of the report and 120,061 the previous seven days. 394,405 Tennesseans have gotten both shots and 10.87% of the state’s population have gotten at least one shot.

At the current rate of vaccinations, all Tennesseans would be vaccinated 728 days from today, or by February 22, 2023.

In other state news, which could have an impact locally, legislation to strip local boards of health of their powers was introduced to the state legislature las fall. House Bill 7 and its senate corollary are proceeding through the legislature and, if passed, would give all authority during a health crisis to the County Mayor, with Boards of Health, specifically in Knox, Davidson, Hamilton, Shelby, Sullivan and Madison counties relegated to advisory only functions.

The bill’s primary sponsor is Representative Jason Zachary of Farragut. Other local representatives have joined the effort. Knox County representatives signed on to the bill include Michele Carringer, Justin Lafferty and Dave Wright.

Additional legislation would shift decisions regarding school openings to a shared power between the Boards of Education and the governor. Boards of Health would have no say in opening or closing schools due to health issues, but rather, the Board of Education would make the decision. The decision could be overridden by veto from the governor. The state senate has passed the bill and it is in committee in the house. Under the legislation, the governor could make state-wide or individual decisions about which schools would remain open or must be reopened.

Two additional deaths were reported today, bringing the pandemic total to 530. One of the people who died was between 65 and 74 and the other was 75 or older. Fifty-four Knox County residents have died of the virus so far this month. The rate is far below the last two months, but similar to November when 61 deaths were reported.

Benchmarks for the county were not updated as of publication. The state reports a 9.7% positive test rate for the county over the last seven days. The most recent update for county vaccination numbers indicates 84,920 vaccinations have been given in the county. 55,770 county residents have had one shot, while an additional 28,933 are fully vaccinated. 11.86% of county residents have received at least one shot.

The Knox County Board of Health meets today at 5:00 pm, with the meeting available via the Knox County Youtube channel, as well as CTV.com.

The number of active cases reported by the Knox County School system rose by four to 97 overnight. Ninety-seven remains well below semester peaks of nearly 300. 3,248 have recovered and 752 remain in isolation or quarantine. The number includes 82 staff members and 670 students and is also well off semester highs of nearly 2,700.

Active cases reported by the University of Tennessee rose by a dozen, to 83. The full increase was fueled by student numbers with rose from 61 to 73. 2,863 have recovered and eight new cases were diagnosed on campus. Isolations, which have remained roughly steady for the last week, are currently at 379, including 43 staff members, 224 residential students, and 112 non-residential students.

Participation rate in the on campus “required” pooled testing has dropped steadily since the beginning of the semester and was 59.6% for last week.