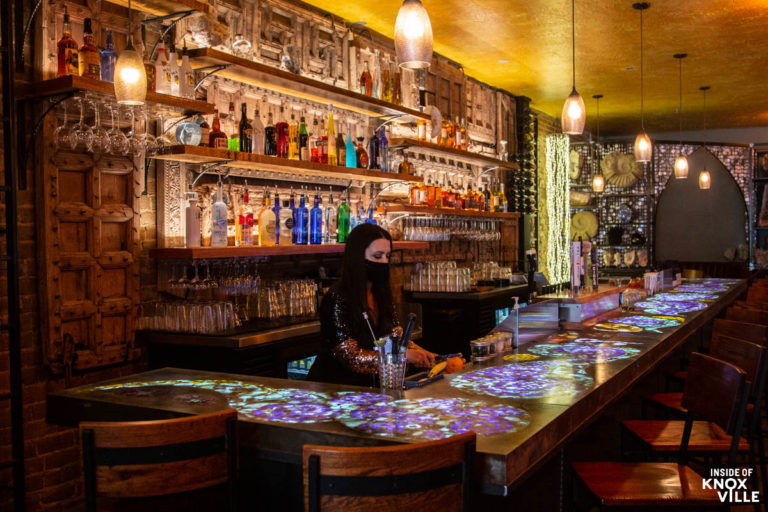 Scott West’s telling of the saga of Bernadette’s Crystal Gardens is a telling of intentions, some of them very good, which all went awry in different directions. It started with his pronouncement, in the original June 2018 article I wrote about the project, that it would hopefully open by that August. The basement was still being excavated in August. As soon as he put Bernadette’s name on it, he knew he had ceded control. She would mold her own vision and she would take the time necessary to make it perfect. It will open almost three years after that original conversation.

What was originally “Bernadette’s Crystal Barrooms,” became a garden, because that’s what Bernadette does. Tabletops which could have been generic, ordered simply and installed, each became a work of art in her own hand. Bar tops were painstakingly designed and formed by Bernadette and artists like John Glass. Each wall was hand painted by Bernadette. Months were spent by Mike West and others, including his partner in crystals, the artist Zee, finding the perfect stones. Each bathroom was hand painted by artists among the staff.

While the new space is physically connected to the comfy Preservation Pub, Bernadette’s is unique unto itself. There’s nothing like it in the city and likely nothing like it anywhere. From the first floor to the roof-top, the smoke-free bar glitters in every direction with 40,000 pounds and 92,000 Karats of crystals. Even the servers glitter and shimmer as they move about.

Starting at the entrance, where Bernadette’s is inscribed in mosaic in the floor, something jaw-dropping emerges in every direction. Amethyst fairy wings just inside the door will make hundreds, if not thousands of appearances on Instagram, as will the nearby stone inlaid tree of life and the massive crystals on the opposite side of the room. A Book of Bernadette will be opened near the entrance featuring photographs of Bernadette in adventure shots from all over the world.

As much as anything, the space is a testament to art. Bernadette and other artists have left their mark throughout, but it is also about the organic art produced by the earth itself literally over millions of years. Organic and natural beauty are celebrated throughout. The human art was made lovingly, one piece at a time as Bernadette executed her vision with her own hands.

A natural theme carries throughout, with honeycombs on wall of the second floor and literal gardens on the rooftop. Drinks are served using herbs grown by Bernadette, some of them on site. Lighted trees, flamingos and water features dazzle patrons from the rooftop.

Seating on the first floor, or the Amethyst Lounge, features booth and bar seating. The booths have high backs and cozy space for as many as eight in a party. They are separated by towers of amethyst, a part of the collection that Scott says is “museum quality,” that serve as volume suppressors between tables, but also give more protection between parties as we work our way through the pandemic. Scott calls vibe “Bohemian Hippy Chic,” with its bohemian, though sophisticated and warm, atmosphere.

The bar tops were designed by Bernadette and executed by Bernadette, along with a team of artists, including John Glass (who worked with the blown glass bar on the second floor), as well as a number of other employees enlisted in the work. In a tip of the hat to the namesake, a private table in the back corner of the first floor is reserved for her, though sometimes available upon request.

The second floor is the Quartz Room. More of the seating is at four-person tables, each one hand-painted, and the floor features the blown-glass bar and a still-expanding honeycomb feature on the wall. The floor will have a musical focus with laidback worldbeat EDM music early and more amped up worldbeat at night. Scott imagines having a DJ for the floor on the weekends blending traditional sounds with electronic music.

The second floor and rooftop will be available for rental for large private parties. The Preservation Pub rooftop is connected to the Bernadette’s rooftop, though they can be cordoned off for events. The Citrine Mezzanine with space for thirty or so can also be rented. The covered space overlooks the rooftop bar, as well as rooftops across the city and the Sunsphere in the distance.

The Magic Beer Tree has been extended onto both rooftops, including the Gemstone Garden atop Bernadette’s. When completed (it is a project for the warmer weather of April), a crystal cascade will be the focal point of the rooftop, which features its own bar surrounding the magic beer tree.

The beverage program has been carefully crafted to both reflect the themes of crystals, gardens, nature, all served up with a little glitz. There is beer – served perfectly cold straight to the tap from a glycol system in the basement – but the cocktails really shine. Signature cocktails are themed to each floor and are delivered in a rainbow of colors, designed to be as beautiful as they are delicious. Each cocktail is made with fresh ingredients, some of which will be straight from the garden.

The food program will focus on light, shareable finger foods and the menu is almost entirely vegetarian, with a few deviations in the pescatarian direction. Scott was particularly excited about the cheese balls, which he describes as smaller, lighter and different than any pre-conception you might have about them.

The menu and drinks will evolve, as they consider the project a collaborative artistic effort with their customers. They are starting with items they expect to be popular, like their house-made kombucha, prosecco on tap, mimosa flights, and cocktails with frozen fruit pieces as ice. From there, they will go where their customers send them.

In an effort to encourage true interactions, you won’t find television screens on either of the first two floors. Additionally, happy hour will be designed for those who don’t use their personal screens, with special prices for those who set their phones aside.

Bernadette’s Crystal Gardens will officially bloom on Monday, for a March 1st opening.

There are so many beautiful photographs of the space, that one article can’t hold them. Check out the gallery here for more photos.