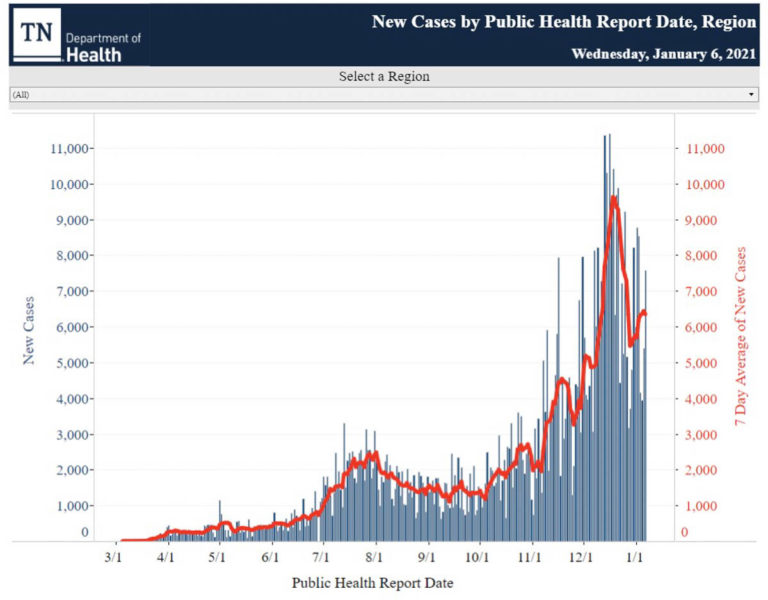 There certainly is a powerful commentary in the fact that more people in the U.S. died of COVID-19 yesterday than any day since the beginning of the pandemic and it was not the lead story of the day. I’ve barely seen it mentioned. Worldometers put the total at 4,100, though other outlets, with different cutoffs put it just below 4,000. The New York Times, which does mention it on their front page today, puts the number at 3,963.

Certainly, the embarrassing and horrifying events in Washington, D.C. yesterday was enough to overshadow all the news on most days. I fear we’ve also become numbed to the statistics to the point that, while big, the number blends into all the others. For a perspective on 4,100 deaths, one month earlier, on December 6, there were 1,109 deaths. 4,100 American families started planning a funeral yesterday. Please do not get distracted. The finish line is becoming more visible.

As test reporting begins to recover, though continues to be quite low, the number of daily cases reported by the state is rising, with 7,588 new cases added yesterday. Pandemic totals have now reached 542,290 confirmed cases and 82,747 probable cases. Of these, 548,838 are considered inactive, while 69,018 Tennesseans currently have an active case of COVID-19.

100 additional Tennesseans were hospitalized yesterday with the illness, bringing the pandemic total to 14,935 who have been hospitalized at some point. As of two days ago, the last day for which complete information is provided, 3,332 COVID-positive Tennesseans are in the hospital, while 798 are in hospital ICUs and 463 are on ventilators.

The number of hospitalized Tennesseans establishes a new record high, while the other two numbers are just below their respective highs. Hospital beds in the state have now reached 88% capacity, while ICU beds are more pressured at 93% across the state.

114 additional deaths were reported yesterday because of COVID-19 in Tennessee. The state total has now reached 7,381. This week will likely be the deadliest from the illness that the state has ever experienced.

According to the state vaccination monitoring site, 169,070 state residents, or about 2.5% of the state population has received their first shot. The state also reports that on the last day with confirmed numbers, 12,081 new vaccinations were given. We best hope that number skyrockets, because at that rate, it will take an additional 551 days to distribute the vaccine to the remainder.

The Knox County Health Department is reporting 371 new cases today, a number that reflects the increase in testing reported above. Yesterday’s number was 156, reflecting the extreme low numbers of tests being reported. This brings the county’s pandemic total to 32,269 confirmed cases and 4,099 probable cases. Of these, 31,365 are considered inactive, while 4,634 Knox County residents are known to have active cases of COVID-19.

The state is reporting a seven-day average 22.8% positive test result rate for the county.

For the first time in weeks, the health department isn’t rating all metrics as red. The metric for cases was shifted to yellow, as was testing report time and levels. Public Health capacity, hospital capacity and death rates each remained red. The updated positive test rate was reported as 23.07%. There are 16 total available ICU beds in our region.

Charity Menefee led today’s briefing, expressing thanks to those who are helping administer the vaccine. The Knox County Health Department alone has give 4,000 vaccines to Knox County residents. This does not include vaccines given by hospitals. She said it will take months for supply to catch up with demand. She said they will announce more vaccination events as they get more of the medication.

They are expanding phone access and are looking to develop an online system to make appointments which will be in addition to phone-in registration. You can register now to be notified as to when your group has moved up to eligibility. 4,700 doses have been received and all have been administered or scheduled to be administered.

She confirmed the above numbers. She acknowledged the lower-case numbers may be the result of reduced testing. She said test-return time is now about 3 days, which is a significant improvement from the last report. She said regional hospitals all hit highs in patients, ICU patients and ventilated patients with COVID-19 during the last seven days. We are averaging 4.6 COVID deaths in the county each day.

869 are currently in quarantine or isolation, up from 574 two days ago, for an increase of 51%. The current number includes 722 students and 147 staff members.

All metrics are reported as green, with the exceptions of custodial staff (yellow) and substitutes (red). All schools are currently open to in-person instruction.