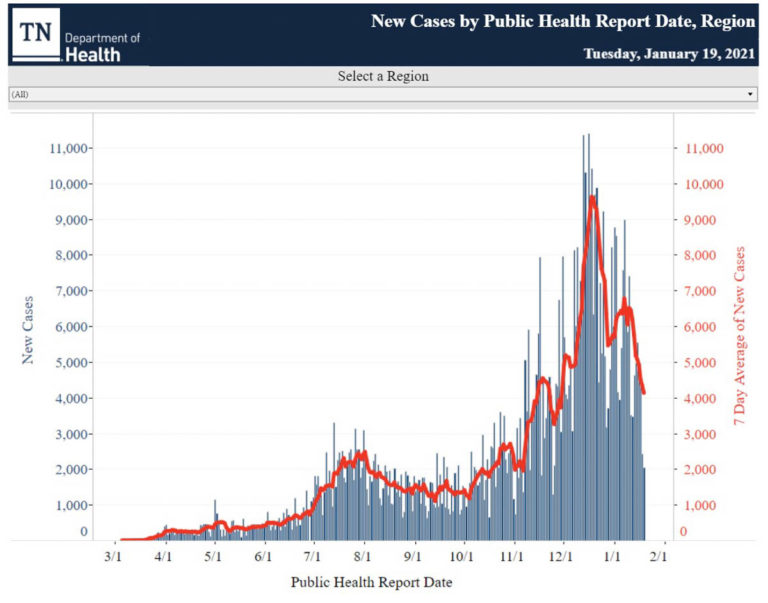 There is no way to start an article today without mentioning the transition of power happening in our country. We may have learned how tenuous and precious a thing we are witnessing. We have taken it for granted as a country for a long time that we vote, and the vote is honored, and now we know that tenet of faith in our country may not be as permanent and unshakeable as we thought. May we each embody respect for our country and its institutions and for our fellow citizens in everything we do and say going forward to allow future generations to enjoy the benefits with which we have been gifted by those before us.

As the state continues to hit new lows in testing volume, case numbers, hospitalizations, and positive test rates. We almost certainly have seen a peak, and we can hope it is the final peak. As strange and abrupt as it is, the virus clearly seems to be receding. This is not to say that we should relax or celebrate. We continue experiencing numbers that horrified us just a month ago.

An additional 73 Tennesseans were hospitalized with the virus, bringing the pandemic total to 16,134. Current hospitalizations increased slightly to 2,695, though the number remains far nearly six hundred below the peak earlier this month. 694 are currently in ICUs, continuing that decline, while those on ventilators now number 407, reflecting a steady increase over the last several days, but still about 70 below highs reached in recent weeks.

The state reported 40 COVID-19 deaths yesterday, bringing the pandemic total to 8,470 who have died of the virus in Tennessee. The state is now averaging 66 deaths per day, the lowest the seven-day average has fallen for the last week and is the lowest it has been since December 30.

The state reported just under 12,000 tests yesterday, below the day before by about 2,000 and about 1/4 of the numbers routinely reported just a month ago. The state has given about 6.1 million tests since the beginning of the pandemic. The reported positive test result rate continues to drop, with the state reporting a positive test rate of 12.43% for the day, yesterday. Johns Hopkins University is reporting a 17.5% (and dropping) seven-day average for the the state.

The state’s vaccination portal has been updated with data through 1/18 and now reflects that 370,895 total vaccinations have given (including first and second doses). Unfortunately, the pace reported both with the previous day (6,333) and week (95,696) declined from the previous week. At the current rate, vaccinating 100% of the people in the state would take 972 days, or until September 19,2023. Clearly, something must change.

As with statewide case numbers, the local numbers for new cases continue to be startlingly low. The Knox County Health Department reported 85 new cases today, the first time the number has been under 100 since November 25. It brings the county’s totals to 35,530 confirmed cases and 4,957 probable cases. Of these, 36,226 are considered inactive, while 3,838 Knox County residents remain COVID-positive.

Hospitalizations rose slightly to 140 but remain far below the peak reached earlier this month. It brings the total hospitalized to 1064. The county, unfortunately, reported the highest single-day total for deaths at 14. It brings the total Knox County residents who have died of the virus to 423. The new deaths included three people between the ages of 45-64, one between the ages of 65-74 and ten over the age of 75.

In its first update since the holiday weekend, the Knox County School System reported 223 active cases, down from 277 in the previous report. The 223 includes 161 students and 62 staff members. 2,395 students and staff are counted as recovered. The number in isolation or quarantine also dropped, and dropped significantly, from over 2,700 to 2,052. Of these, 1,863 are students and 189 staff members.

University of Tennessee students report to classes (virtual and in-person) today. The university is reporting 51 active cases as they return among students and staff. Two new cases were reported yesterday. 168 are reported to be in isolation or quarantine, up by 33 from the number reported the day before.

89 students or staff were testing last week by the Student Health Center and a dozen were tested positive.