Cal Johnson Park Basketball Court: A Splash of Color for the City 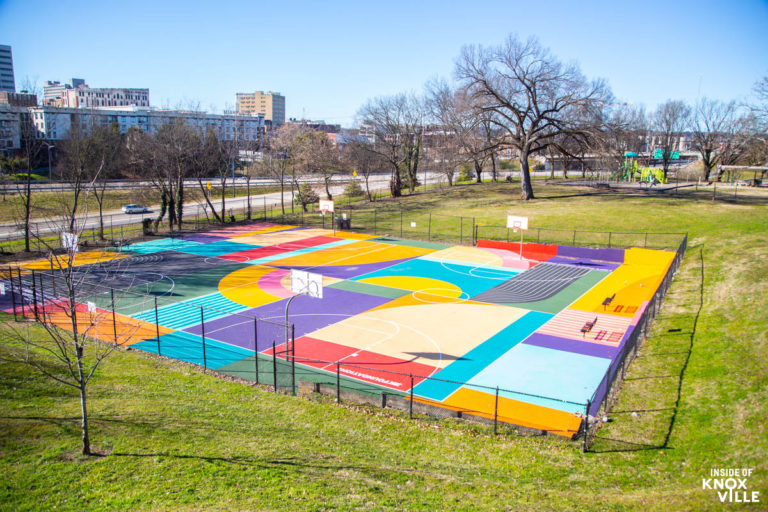 The Orchid Awards, which I wrote about last week, prompted me to tune in to a couple of projects I had not spotlighted. Cal Johnson Recreation Center, at 507 Hall of Fame Drive, received an infusion of $781,866 from the city and $100,000 for a privately funded art project. It was the art project which caught my eye. In fact, it caught my eye from the balcony of my condo on Gay Street. It’s a beautiful splash of color visible from many homes to its east and west.

The basketball courts in the park had become worn out and needed resurfacing. The mural now covering the courts – which leaves the basketball stripes intact, were funded with donations from 2K Foundations and WNBA and former Lady Vol star Candace Parker. It gives a tip of the hat to Cal Johnson, Parker, Pat Summitt and Nikki Giovanni.

Author Nikki Giovanni is of particular interest to me. I’ve enjoyed her work for 40 years and feel she needs to be honored more in the city where she was born and spent summers. Those summers were spent with her grandparents on Mulvaney Street, in the spot where Hall of Fame now runs. She returned to the city to graduate from Austin High School.

Her poem “Mulvaney Street” documents the devastation of the east Knoxville neighborhood by urban renewal in the 1960s. Her grandparents’ home was destroyed along with many others. Very little is left of the world she inhabited as a child, though the park where she played remains. The court now includes a quote referencing those times, “All the while, I was quite happy.” And I’m happy I can see a Nikki Giovanni quote from my home.

The interior of the Cal Johnson Recreation Center, named after Cal Johnson, a former slave and Knoxville’s first black millionaire, who donated the land for the park 100 years ago, received a $570,000 makeover, which included a reconfigured space creating a more functional center and including accessible restrooms. A great room and two activity rooms were added and the kitchen was improved. A new fitness room, computers and WiFi have upgraded the facility significantly.

Exterior improvements went beyond the changes to the courts, with the city investing over $80,000 for a 4,500-square foot playground including benches, slides, climbers and more.

The community participated in plans for the center and the outdoor facilities and showed up in large numbers on short notice to help with the painting of the mural, which was spear-headed by Project Backboard. It’s a win for everyone, with the community building the mural that they can enjoy as they improve their health.

And I can see a splash of color in the midst of the gray winter terrain of the city. I can’t quite read the words of Nikki Giovanni (unless I pull out the binoculars), but I can see them and think of her and of Cal Johnson and how, in the end, their memories were not erased. For that, I thank everyone involved and encourage everyone to stop at the park and take a look.